Jonathan Miles is a former longtime resident of Oxford, Mississippi, and he currently lives along the Delaware River in rural New Jersey. A former columnist for the New York Times, he is a Contributing Editor to magazines such as Details, Garden & Gun, Men’s Journal, and Field & Stream. His Field & Stream cooking columns were collected in the 2013 cookbook, “The Wild Chef.” His work has been included numerous times in the annual Best American Sports Writing and Best American Crime writing anthologies.

His first novel, Dear American Airlines was named a New York Times Notable Book and a Best Book of 2008 by the Wall Street Journal, Los Angeles Times, Pittsburgh Post-Gazette, Amazon.com, and others. It was also a finalist for the QPB New Voices Award, the Borders Original Voices Award, and the Great Lakes Book Award, and has been translated into six languages.

Now, in his much anticipated second novel, Want Not, Miles takes a giant leap forward with this highly inventive and corrosively funny story of our times, a three-pronged tale of human excess that sifts through the detritus of several disparate lives—lost loves, blown chances, countless words and deeds misdirected or misunderstood—all conjoined in their come-hell-or-high-water search for fulfillment.

HottyToddy.com’s Editor-in-Chief Emily Gatlin had the opportunity to ask Jonathan a few questions about Want Not, his new cookbook The Wild Chef, and his beloved Oxford.

Every writer has a story that inevitably launches their career. What is yours?

My journalism career began at the Oxford Eagle. I didn’t know at the time that I was starting a career; I just needed a job after failing my way through some busboy and bartending gigs. But I quickly took to it–I loved that front-row seat at human drama, I loved the access it gave me to other peoples’ lives and world views. This being Oxford, there was also massive weirdness to savor. In 1995 or thereabouts, an Ole Miss student frustrated by the waiting requirements for sex-change surgery asked his roommate to castrate him. The roommate had studied veterinary science at State, so I guess he figured he knew the mechanics. But things went awry, as will happen during a kitchen-counter castration, and the student had to be airlifted to the Elvis Presley Trauma Center in Memphis, where–happy ending– he was fast-tracked for a sex change. Not the Eagle’s proudest moment, perhaps, but definitely one of its most talked-about. There weren’t any papers left in the boxes that day, for sure.

You moved to Oxford when you were 17, attended Ole Miss, met Larry Brown, and he took you under his wing. Your debut Dear American Airlines was one of the New York Times Book Review’s 100 Most Notable Books of 2008. How much of an influence did Larry Brown have on your writing?

A spectacular influence, though that might not be evident, at first glance, in the text. Our writing styles and settings are very different, and yet every word of mine bears his imprint. Probably the greatest lesson I learned from him was about empathy: you have to care for every character, even (maybe especially) the ones whose actions might repulse you, because if you care enough about them, they’ll come to life for you, they’ll breathe and sweat as human beings, and then they’ll start surprising you — which is where, for the writer and the reader, the fun begins. The other crucial lesson was determination. Larry wrote more than 100 stories before finally publishing one. After, say, story #8 of mine failed, how could I have possibly ever said to him that this was all too hard, that maybe I needed to bag this dream? Larry’s example made quitting impossible. And quitting ends far more artistic ambitions than rejection. Even now, when I’m tangled in some painful novelistic briar patch, I just conjure Larry’s voice. His voice is still my Popeye’s can of spinach. 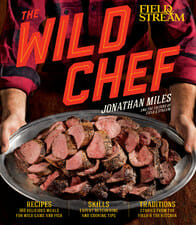 Speaking of Larry Brown, you are also the editor of Field & Stream’s new cookbook, The Wild Chef, which is absolutely fantastic. But the biscuits and squirrel gravy recipe? Really?

A delicious gut-pleaser from a time before Americans decided meat came naturally encased in plastic wrap and styrofoam. Squirrel has a delicate, nutty flavor; in England, where true wild game makes it onto restaurant menus, it’s a highbrow delicacy. The recipe you speak of, by the way, was indeed Larry’s. He cooked that dish for me several times after the boys shot some grays out in Yocona. The most comforting comfort food ever.

Your new novel Want Not is very different from Dear American Airlines. For one thing, you have almost a dozen major characters and different storylines that (SPOILIER ALERT) intersect. They are all well developed, which is difficult to do when you have a lot of stories and complex characters to wrangle. You used the trash to tell their stories. What were the origins of Want Not?

I wanted to try something completely different from Dear American Airlines, is certainly part of it. Using trash to tell these characters’ stories grew out of the first character’s connection to trash: She’s a squatter in New York City, an eco-radical who feeds herself by scavenging food from dumpsters as a matter of principle — as a means of reclaiming the excess that our society chucks. Digging through the trash with her, in my imagination, I started finding the debris of a whole slew of lives — all the secrets that people leave at the curb. Disposal became a metaphor for so much of life: junked marriages, junked memories, even the headline horrors of infants left in dumpsters. These characters’ trash cans proved a compelling back door for accessing their lives.

You ate garbage, didn’t you?

Yeah. I did. I had to understand some of my characters’ menus. I ate like a raccoon for a while, which wasn’t always as bad as it might sound. Raccoons are chubby for a reason.