On Tuesday, HottyToddy.com learned that charges have been filed in the Carson Otter assault case from September. Joshua Medina Ramirez, 25, has been charged with aggravated assault, which is a second-degree felony.

Otter was in Austin for the Ole Miss-Texas game and according to eye witnesses began having a verbal altercation with two men in a silver Honda. Then one man got out of the vehicle, punched Otter and his head hit the curb. Otter was taken to University Medical Center Brackenridge where doctors took out a portion of his skull to relieve pressure on his swollen brain.

He spent several days in University Medical Center Brackenridge before moving to Central Texas Rehabilitation Hospital. He is now back home in Bloomington, Indiana.

A warrant has been issued for the arrest of Ramirez as of Tuesday.

Eye witnesses say that attacker was in a silver four-door Honda.

Early Saturday morning around 2 a.m., Carson Otter, an Ole Miss student, was assaulted by an unknown assailant at the intersection of Trinity Street and East 7th Street in Austin, Texas.

According to eyewitnesses, Bloomington, Indiana native Otter was walking with some people when a silver Honda four-door sedan drove by and words were exchanged between Otter and the occupants of the car. Then, eyewitnesses said, a passenger in the sedan got out of the vehicle and struck Otter once, Otter fell to the ground, and the man got back in the vehicle and fled the scene.

No arrests have been made by the Austin Police Department yet. The potential charge currently facing the unknown assailant is aggravated assault. When police arrived on the scene, Otter was already being treated by Austin Travis County EMS. He was transported to University Medical Center Brackenridge.

While at University Medical Center Brackenridge, Otter underwent emergency brain surgery. Candy Otter, Carson Otter’s mother, posted on Facebook that Carson had been able to breathe on his own for a few hours on Sunday and that a second computed tomography (CT) scan had brought back positive news. Candy Otter also said that Carson had been able to open is eyes and nod in response. 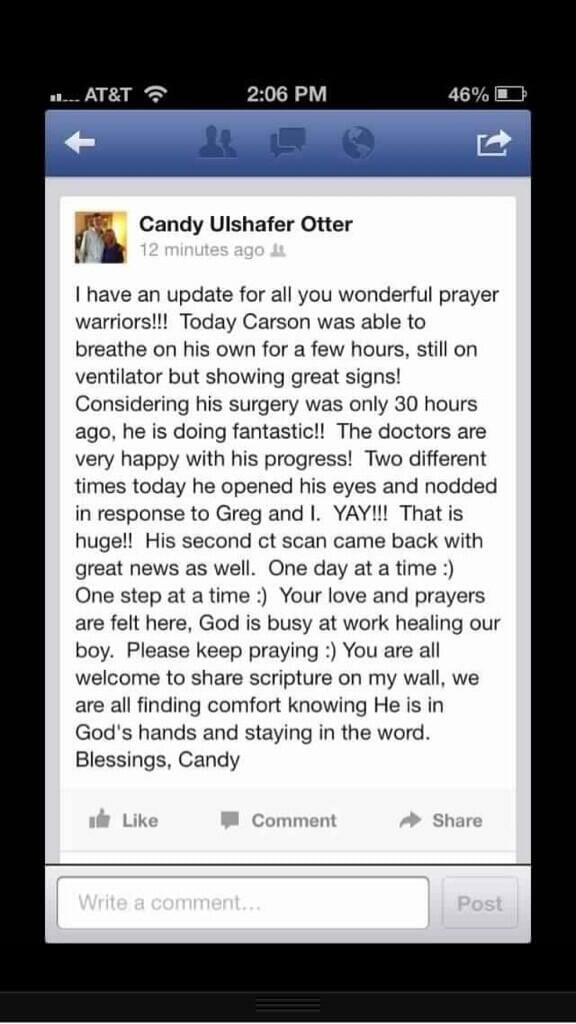 KXAN in Austin has more on the story