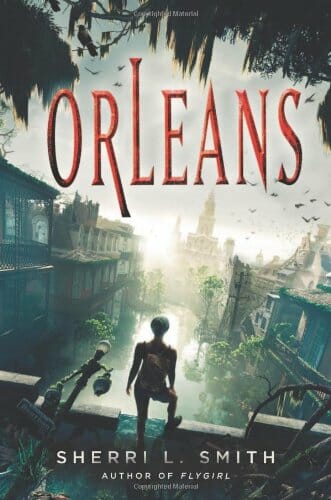 After the devastation of Hurricane Katrina in 2005, the Gulf states were hit over and over by larger category 4-6 hurricanes.

Jesus took an estimated 8,000 lives and left the Gulf with an estimated 10,000 survivors. The pestilence that followed was known as Delta Fever and reported to be the worst outbreak since the Spanish Influenza of 1918.

In 2020, the fever could not be controlled and thought to be incurable. A quarantine was declared by the Center for Disease Control and borders to the region were sealed. Without war, the United States became five states less in 2025. All aid to Alabama, Florida, Georgia, Louisiana, and Texas ceased and by the year 2050 humans are thought to be extinct in those non-state areas.

Fen de la Guerre is O-Positive. All her tribe is O-Positive and they live in the woods outside of Orleans. She stays alone in a leaf covered lean-to while most of the tribe live in mud made warrens. They move constantly since they are hunted for their quality blood. Everyone in Orleans carries the fever but O-Positives are the mildest strain.

ABs are the blood thirstiest of the tribes. They live within the old city where only fools venture after dark. Their chieftain keeps them hopped up on drugs and the fever makes their eyes look bloody. To see an AB is to see insanity walking.

Fen’s tribe is the only one to have a woman chieftain, Lydia Moray. Lydia is eight months pregnant and feeling the weight of hosting her first powwow with the O-Negatives. Fen has her suspicions that Lydia’s baby is a product of an unwanted O-Neg visit and tonight the secret will be revealed.

The O-Negs are dressed to impress with feathers, alligator leather and painted bodies. They leave their weapons at the warren opening and are greeted with drinks from the O-Positives. As they gather around the fire, the outside trees and bushes are filling up with crazed ABs. The attack will be swift and only two survivors from the O-Positive camp will see the sunrise.

“Orleans” is the second book by the award-winning author of “Flygirl,” Sherri L. Smith. This young adult book is filled with science, adventure and awe. I stayed up late into the night to read this one.