Despite Cancelation, Marathoners Compete For Kids With Cancer

Runners lined the streets of Memphis on Dec. 7 to run the St. Jude Marathon hours after the race was officially cancelled. 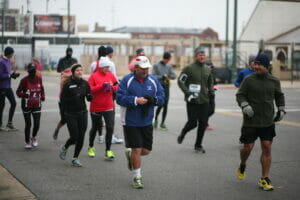 At the St. Jude Heroes celebration dinner the night before, CEO Rick Shadyac lamented that he would cancel the race due to weather conditions, but it would not happen in vain.

“We raised $8.2 million this year and we raised a little over $5.7 million last year so it was a phenomenal increase” Shadyac said.

Though the race was cancelled, many runners took to social media to recruit runners to brave the cold and run the route anyway. Marathon runner Alison King showed up at 8 a.m. to run for the kids at St. Jude, despite the bad weather conditions.

“We trained for it. We’re running for the kids at St. Jude. They didn’t have a choice about their treatment and when circumstances weren’t good, they had to do it, so we’re running anyway,” King said.

The marathon normally congratulates runners, or ‘Heroes’, for their sacrifice offering free food, water, coffee, pictures and medals for the marathon finishers.  The Peabody Hotel hosted the post-race party, which was the original plan. The hotel lounge filled up as rogue runners finished their full or half marathon runs. Shadyac arrived after the first wave of runners.

“I’m proud of what I see here in the Heroes Lounge. I see the number of people that showed up.  I commend them for their spirit,” Shadyac said.

Shadyac informed the runners present at the celebration dinner that they could receive a refund of their race registration fee or they could leave it as a donation to the hospital.  The registration fee could also be transferred to another St. Jude sponsored race event.

– Jared Burleson is a student in the Meek School of Journalism and New Media.