For 24 years, Ruby Chinese owned the market on Chinese food in Oxford. I know my family ate there on a regular basis. In fact, Ruby Chinese hosted my parents’ rehearsal dinner. As kids, my sister and I were particularly fond of the “poo-poo platter”.
in 1978, Tom Chien’s parents opened Ruby Chinese in a converted 50’s-style cafe next to the Ramada Inn (now the Super 8) on Jackson Ave. They kept the old A/C units, refrigerators, dishwasher, fryer, and grill station. They even utilized the original orange booths and lunch counter.
“He’s a perfectionist that would settle for nothing but the best ingredients and quality output,” Chien said about his dad. “That’s probably why several people have said it’s comparable to food they’ve had in NYC or San Fran. Most people said they’ve never found better.”
On the Restaurant History of Oxford, Mississippi Facebook page, Chien offered this bit of trivia: His mother’s name is Ruby, but that’s not the Chinese name of the restaurant. It actually translates to “The Grand Red Gem Restaurant”. So, it is Ruby’s… and it isn’t.
Unfortunately, Ruby’s Chinese closed its doors in 2001 after 24 years of business. I will forever miss cooking the pieces of my poo-poo platter over that small grill (because at 7 years old, that was the coolest). 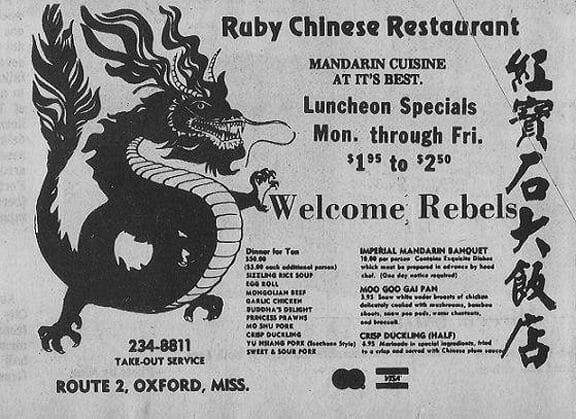