January 17, 2014
0
893
By Laurie Triplette
ldtriplette@aol.com
SOUTHERNISM OF THE WEEK
Bread and butter: A universal American expression having several definitions, according to usage… (1) One’s basic livelihood, presumably the means for buying the bread and butter staples for survival (related to the expression which side is your bread buttered on, which refers to the source of one’s livelihood); (2) anything that has been melded together in such a way that it cannot be separated; (3) a superstition-based expression uttered when two people are walking together and have to split to walk on either side of an obstruction such as a pole or tree.
LET’S GET BACK TO BASICS
Americans’ culinary taste preferences and habits have evolved significantly since our forebears’ reliance on homegrown grains, dried beans and fruits, and salt-cured meats. Improved household wealth and mass food distribution have made this possible. By the turn of the new century, the very sources of our food supply had become an obscure concept for the majority of our population.
Traditional American eating habits were based on what we could grow, gather, or hunt, what we could preserve from our efforts, and how we could repurpose the leftovers in combination with cupboard staples. Money was always tight when America was an agrarian nation. Nowhere in the United States was this more evident than across the South, whose multicultural populations comingled their foodways during the process of surviving natural disasters, wars, recessions, and the shift away from farming to manufacturing.

2 (26-oz) containers of beef stock or broth, or beef AND chicken broth 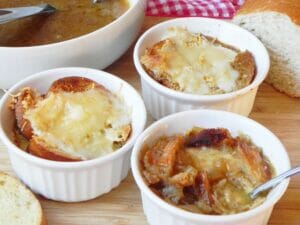 Splash of cognac or sherry, optional

Slice onions about 1/8 inch thick. Sauté in large saucepan in butter until browned but not burned. Cover, and stir occasionally until onions have become caramelized and golden (about 20 minutes). Season with the pepper and salt. Stir in the stock broth (beef or beef and chicken). Simmer on medium-low heat about 30 minutes until broth reduces by about a third. Add optional splash of cognac or sherry during this stage. (Try making it without the booze when you make it the first time, then judge.)
While the soup is simmering, slice bread into slices about 1/4-inch thick. Slather each slice with softened butter or olive oil and sprinkle with garlic powder. Toast the slices until crisped in preheated oven set at 350˚F.
Ladle soup into individual ramekins or a single large casserole. Top with the toasted French bread. Sprinkle generous amounts of shaved Parmesan over the toast. Bake until cheese is melted. Serve at once. Break up the cheese-toast into the soup. YIELD: About 10 (7-oz) individual ramekins.
VARIATION: Boil some carrots and celery in the beef stock and remove them before adding stock to caramelized onions.
RUMMY BREAD PUDDING 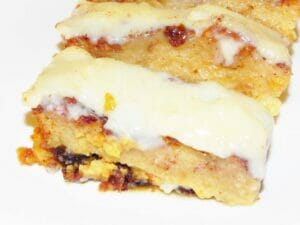 VERY RICH! This is my take on classic bread pudding. I always add raisins because my conscience won’t allow me to consume bread and butter and sugar without some diet-redeeming fruit in the mix. Of course, soaking the raisins in rum first adds a desired touch of decadence. Although challah or a similar brioche bread works best, I have found that our Oxford Kroger offers a great substitute — a two-pack of sweet Italian baguettes.
Pudding:

12-oz can of evaporated milk

Preheat oven to 350˚F. Grease a deep 8-1/2 or 9-inch casserole baking dish with nonstick cooking spray or butter. Soak the raisins in 2 T of rum in a small bowl for about 10-20 minutes. Melt the butter in the microwave and pour into a mixing bowl. Beat with first sugar. Mix in the eggs, one at a time. Mix in the milk until completely blended, and add vanilla.
Fold in the bread cubes and stir vigorously. Press and mash, and stir until the bread has become mushy and cubes no longer defined. Stir in raisins last and spread evenly in a prepared baking pan, OR wait and fold raisins into the batter once the pudding has been spread in the pan (the raisins will all fall and make a layer in the bottom of the pan if mixed into the batter).
Combine the cinnamon, second sugar, and nutmeg, and sprinkle evenly across top of pudding. Bake about 20 minutes, until firm in center.
While pudding is nearing completion, heat the cup of milk and butter in a medium saucepan. Whisk in the sweetened condensed milk and the dissolved cornstarch (should be runny rather than thick), continuing to whisk and stir to prevent scorching, which can occur quickly because of the condensed milk sugars. Stir in last sugar and continue stirring or whisking gently until thickened. It will set up suddenly.
Remove from heat and whisk in rum. Set aside until the pudding comes out of oven. Spread the sauce topping evenly across the hot pudding. It is not necessary to use ALL the sauce as long as it completely covers the top of the pudding. Allow pudding to cool. Slice and serve. Refrigerate unused portion. Yields 15 to 20 small servings.
DEEP CHOCOLATE BREAD PUDDING 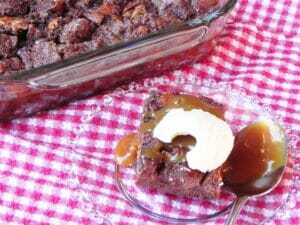 This version is extremely rich and dark. Tastes best served hot with ice cream and coffee. For a sweeter and lighter version, use the smaller amount of chopped semisweet chocolate; feel free to include some milk chocolate chips. If reducing the chocolate amount, increase the sugar amount. For a creamier, pudding-like version, remove crusts before cubing bread. Pudding made with cubes containing crust sets up more like a decadent brownie cake.

12-oz can of evaporated milk

5-oz can of evaporated milk

Melt butter in microwave. Place bread cubes in large bowl and add melted butter. Use hands to toss and coat all the cubes. Place buttered cubes into a buttered 9-by-13-inch baking pan. In a large saucepan, heat the milks to a simmer, remove from heat. Whisk in the chocolate until melted and smooth. Set aside to cool on rack.
Whisk the eggs, yolks, and first sugar in a separate bowl until frothy. Whisk the chocolate mixture again to accelerate the cooling and remove chocolate bits from bottom of the pan. Temper the egg mixture with about a tablespoon of the cooled chocolate mixture. If still lukewarm, whisk the chocolate mixture vigorously, and add a few more tablespoons to the egg mixture while whisking the eggs.
While whisking, pour the remaining chocolate mixture into the eggs in a steady stream. Whisk until completely blended. Pour over the bread, mash the bread down to completely coat with pudding. Loosely cover pan and allow to sit at room temperature for about 20-30 minutes, or in fridge if the room temperature is hot. The key is to allow the egg-chocolate mixture to saturate the bread cubes.
Just before baking, preheat oven to 350˚F. Sprinkle 1 to 2 T of sugar evenly across the top (this will result in an attractive glaze once baked). Bake on middle rack for 35 to 45 minutes, until pudding is set in the center. Remove to rack to cool enough for pudding to set up. Serve warm or cool with a caramel sauce and whipped cream or ice cream. Refrigerate leftovers.
(BOURBON) CARAMEL SAUCE
Caramel sauce is slightly different from caramel syrup, in that it contains cream and often contains corn syrup. Caramel syrup usually consists solely of caramelized white sugar and water, although brown sugar may be used. Our friends in Kentucky are very fond of adding this boozy iteration of caramel sauce to their bread puddings. Feel free to omit the alcohol or to substitute a different booze more to your taste, such as Kahlua, rum, Irish Whiskey, or brandy.

1 T up to 1/4 c bourbon or comparable liquor

Combine sugar, water and corn syrup in a medium saucepan. Bring mixture to a boil on medium heat. DO NOT STIR. Cook until the sugar has dissolved, washing down sides of the saucepan with a wet pastry brush. Continue simmering without stirring about 6 more minutes, until the mixture turns into an amber caramel. Remove pan from heat and gently stir in the cream with a wooden spoon. Stir in the booze, for about a minute until completely blended. Set aside on a rack or back burner to cool completely. Transfer caramel to a clean dish, jar or bottle. Store covered in fridge when not using. The caramel sauce may be heated in a warm water bath before serving.
Laurie Triplette is a writer, historian, and accredited appraiser of fine arts, dedicated to preserving Southern culture and foodways. Author of the award-winning community family cookbook GIMME SOME SUGAR, DARLIN’, and editor of ZEBRA TALES (Tailgating Recipes from the Ladies of the NFLRA), Triplette is a member of the Association of Food Journalists (AFJ),Southern Foodways Alliance (SFA)  and the Southern Food and Beverage Museum (SOFAB). Check out the GIMME SOME SUGAR, DARLIN’ web site: www.tripleheartpress.com and follow Laurie’s food adventures on Facebook and Twitter (@LaurieTriplette).