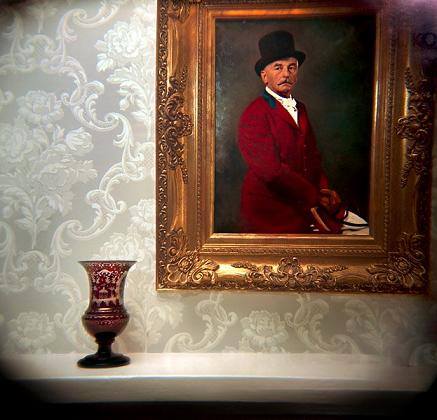 This portrait of William Faulkner is based on a photograph by my grandfather J.R. Cofield.
Five oil paintings were done from the photograph. One hangs at Rowan Oak (pictured), one in the chancellor’s office at The University of Mississippi, one in the chancellor’s office at The University of Virginia and two at Cofield’s Studio. When the studio burned in 1986, we lost our framed painting, but the second unframed version was wrapped and stored under a large bureau.
A fews days after the fire, Mom remembered it and sent my brother Glenn down to see if there was anything left. He climbed through the rubble and found it. It hadn’t been touched by the fire. Neither had the little covered stool that sits in my office.
The following account by Grandfather J.R.. Cofield, describes how he came to take the shot:
“One morning in 1961, Bill called me at the house and said, ‘Cofield I’d like for you to take a few shots of me this morning. Some friends of mine in Virginia are wanting some photographs of me in my riding costume. So I went on down and opened up and got everything all ready. It was a pretty quiet day. Nobody else in the studio.
At 10 a.m., Bill pulled up in his little Rambler station wagon. He commenced to taking his riding clothes out of the back of the car. He said, “You got a place I can dress here?”
I said, ‘What kind of outfit is THIS?’ He didn’t say anything. His hair was all groomed and he was clean shaven. It didn’t take him ten minutes to put his riding habit on. I took one look at him and said, ‘My God what an outfit!’ He gave me a genial smile, but he was ready to get on with the picture-making.
I wanted to pose him with his foot propped on something. Bill spied my little covered stool. I told him to prop his foot up and relax. So he kind of leaned on one knee. I knew that the very first shot, the one Bill posed himself, was the best one, but I shot about a dozen to make sure. When Bill came in a day later to see the proofs, he was delighted with them. He immediately picked out the one I thought was the best shot. Bill was very pleased. It was an honor he was very proud of–riding to the hounds in Virginia. Later he wrote me several times from Virginia for extra copies.” -J. R. Cofield