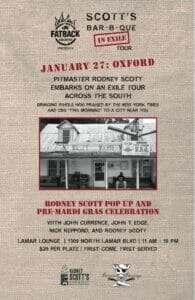 Following in the vein of the City Grocery Group’s Big Bad Pop-Ups that injected Oxford with major excitement last January, Lamar Lounge, now operated by the group, will host Rodney Scott for a stop on his Scott’s Bar-B-Que In Exile Tour on January 27, 2014.
The “In Exile” part of the tour owes to the fact that a couple days before Thanksgiving, Scott’s pit house burned. Rodney Scott put in temporary pits to keep the operation going, but is now taking his que on the road while rebuilding his pit house to proper specs.
The event is $20 a plate, first-come, first-served.
Scott’s Bar-B-Que was founded in 1972 by Ella and Roosevelt “Rosie” Scott in Hemingway, South Carolina. Rosie’s uncle taught him the downhome technique of slow cooking whole hogs over a wood-burning pit. Today the legacy continues with Rosie, Ella and their son Rodney. Rodney Scott cooked his first hog when he was just 11. Now, about 30 years later Rodney serves as the pit master at Scott’s Bar-B-Que.
“For aficionados in search of ever-elusive authenticity, Scott’s offers all the rural tropes of a signal American barbecue joint…the crowd that Saturday afternoon was typical: Half black and half white, half locals and half pilgrims,” wrote Oxford’s John T. Edge in The New York Times.
Lamar Lounge is at 1309 North Lamar Boulevard.
— Tad Wilkes, tad.wilkes@hottytoddy.com