He’s had a lot of the material recorded for a while, but it’s been our misfortune that it hasn’t seen the light of CD or iTunes day yet. With his finally forthcoming album By Landlord’s Request, Jeff Callaway, known mainly as a trombonist/brass man, reveals more of the man behind the horns. The tracks follow a path you’re not likely to stroll on anyone else’s record.
You’ll hear a guitar-strummed, relaxed original song with Callaway taking his turn at the mic to bare his soul vocally, followed by a straight jazz instrumental number, followed by another singer/songwriter piece, followed by another jazz tune, and so on. The record opens with the artist standing his ground in a vacuous culture in the plaintive and poignant “Plastic People”, which he has floated for free download a while online. It’s been featured nationwide on Coast to Coast AM with George Noory as well as on Mississippi Public Broadcasting’s Grassroots with Bill Ellison.
Years of collaborating with local groups such as the Kudzu Kings have obviously left their mark on Callaway’s taste in his original songwriting, and on By Landlord’s Request he even commits to tape a cover of the Kings’ lament “Bryan’s Song,” a musician’s sizing up of his lot in the world. His longing lullaby ballad “Shemaine” pines for an unrequited love who may or may not even remember the lonely troubadour. 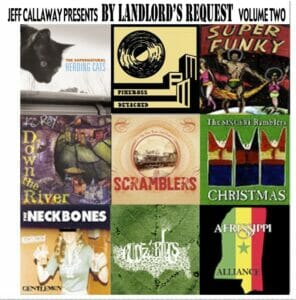 Callaway’s been trying to get you to hear this record for quite a while. How long? Important people have passed on from this mortal coil in the process. In the liner notes, Callaway points out that Barry Hannah originally was going to contribute some words about the artist, and the album includes what Callaway says is American legend Jim Dickinson’s final performance on Volume Two—a collection of songs by various artists and groups featuring Callaway’s horn work. Duff Durrough’s on those tracks, too.
“I guess what I’m saying is I’m glad I finally finished the thing before I’m forced to join my friends on their journey into the Great Beyond,” Callaway writes. “So rather than unduly jeopardize anyone still with us, I guess I’ll just run the risk and plunge ahead myself.”
So, by all means, when it comes out—which Callaway assures us is soon, on CD and iTunes—listen to the damn thing before any of the featured musicians on Volume Two take a powder. You’ll be glad you did, and you might just come to know Oxford’s preeminent horn dog a little bit better in the bargain.
— Tad Wilkes, tad.wilkes@hottytoddy.com