February 5, 2014
0
1140
Coach Hugh Freeze and the Rebels are poised to sign another great recruiting class on National Signing Day, today.
One of the crown jewels of the class definitely is Sammie Epps, a 6-3, 210-pound tight end from Greenwood, Miss., who took an official visit to Ole Miss on Jan. 24.
It should come as a relief to Rebel fans everywhere that Epps and his family firmly believe Oxford is the best place for him to continue his football career.
Rebels may recall that Epps, a 4-star player out of Greenwood High School, briefly de-committed from Ole Miss on Dec. 22, following a brilliant performance in the Alabama-Mississippi All-Star Game. In that contest, which showcases the top high school football talent in the two states, Epps caught a one-handed, 50-yard touchdown pass and was named Most Valuable Player for Mississippi.
One man in particular was not at all surprised Epps received the MVP award. “He made plays all week. His athletic ability is out of sight,” said Lance Pogue, coach of the Mississippi squad.  Epps finished the game with seven receptions for 125 yards and a touchdown. (To watch highlights of Epps in the 2013 Alabama-Mississippi All Star Game, visit: https://vimeo.com/82036187 )
After his breakout performance, Epps decided to take a little time to review all his options. He received interest from Mississippi State and Auburn, among others. However, the sure-handed tight end never took any official visits to another school during his brief time of being de-committed.
Ole Miss is his “dream school”
HottyToddy.com recently spoke with Epps’ mother, Kim Gatewood, and she reiterated her son’s love for Ole Miss.  “His father (Kenyatta Gatewood) and I are very proud of him and his decision to sign,” she said.  “As Sammie has stated from the very beginning, he loves Ole Miss.”

She explained Epps just wanted to take a little time to weigh what will be one of the most important decisions he makes for his future. “He wanted to experience the recruiting process and visit other schools, and that was the reason for de-committing,” Gatewood said. “But as time passed, he realized that Ole Miss has been and will forever be his dream school. Therefore, he didn’t take any other visits and decided to re-commit.”
Following a stellar senior season in which he had 39 receptions for 704 yards and 10 touchdowns at Greenwood, there is no doubt Coach Freeze and staff are pleased with Epps’ choice. Rivals.com has recently moved Epps up to No. 27 in its ranking of the top tight ends in the nation.
As many Ole Miss fans recall, the Rebels were significantly hampered when tight end Evan Engram went down with an ankle injury this past season. Coach Freeze estimated the loss of Engram took away about 25 percent of the Rebels’ offensive playbook, so it’s critical to have a player like Epps who can come in and contribute immediately.
Land Shark Nation: “One of the top 5 prospects of the 2014 class”
HottyToddy.com spoke with recruiting expert Jonathan Ferguson, founder of LandSharkNation.com about Epps and what he brings to the Rebel football program. “Epps will provide the offense with an instant impact player,” Ferguson explained. “His 6-foot-3 frame has tons of room for growth over time, but will definitely give defenders trouble immediately.”

Ferguson compared Epps to current tight end Evan Engram and described what the recruit could mean to the Rebel offense. “Sammie has the size, hands and physical ability to attack the ball at its highest point. He will be the same type of Flex tight end as Evan Engram, and the Rebel offense will be able to get back to the two tight end sets they ran in 2012 with Mosley and Allen,” he said.
According to Ferguson, Epps is definitely a player to watch. “I think he is one of the top five prospects of the 2014 Ole Miss signing class and very well could be No. 1 when it is all said and done.”
Rebel Family
Gatewood and her husband, Kenyatta, are extremely supportive of their son and are thrilled he will soon officially be a Rebel.  “As parents we wanted it to be his decision, and we’re happy he chose Ole Miss!” she exclaimed.
After Epps’ trip to Ole Miss two weeks ago, Sammie’s mother told HottyToddy.com she and the family were even more convinced their son made the right choice. “Hugh Freeze and his staff were remarkable hosts during Sammie’s official visit, and they definitely made us feel like we are a part of the Rebel Family,” Gatewood said. “We are grateful that Sammie will be under the leadership of men with such high values who truly believe in faith, family, academics and football.”
As many visitors to the university will attest, the beautiful campus and charming residents of the community are also a huge draw. “The Ole Miss campus was a beautiful sight to see, and the residents of Oxford are the friendliest people one will ever meet,” Gatewood noted. 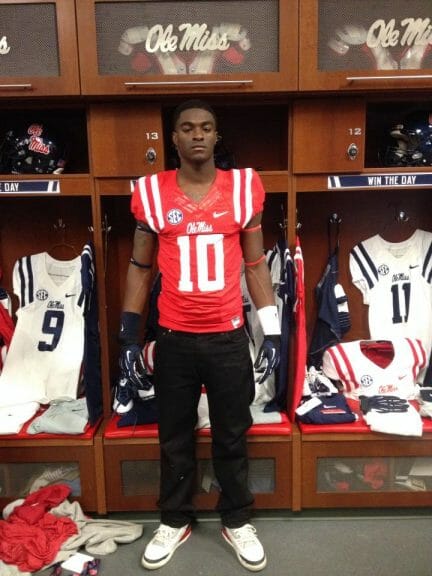 Her appreciation of Coach Freeze, the university and Rebel fans is obvious. “We were impressed with the coaching staff and the university, and we love the direction in which Coach Freeze and his staff are headed. We admire the family-friendly atmosphere, and Old Miss fans are the best!”
For their part, Ole Miss fans can hardly wait to see Sammie Epps suited up and playing at Vaught-Hemingway Stadium.
In the end, it does not matter if this star athlete took a brief time to step back and assess his options. In fact, that was the prudent thing for him to do. What matters most is he and his family firmly believe Ole Miss is the best school for Sammie.
“We feel confident our son has made the right decision by choosing Ole Miss,” Gatewood said, “and we are thankful the coaching staff has always believed in Sammie!”
Rebel Nation is thankful Sammie has always believed in the Rebels, too!
Stay tuned to HottyToddy.com for the latest recruiting information — and look for our live updates on National Signing Day, Feb. 5.
Hotty Toddy!
Evie Van Pelt is a HottyToddy.com. sportswriter. Photos are courtesy of the Epps family.
Facebook
Twitter
Pinterest
Previous article
State Commit Sticks With Rebels On Signing Day
Next article
VIDEO>>Ole Miss Women's Golf Coach on Signing Day