It’s safe to say everyone knows the best-known dishes at restaurants in town. THIS list is simply a small sampling of a handful of lesser known items we think you ought to get to know better and look for the next time you visit these eateries. With that foundation laid, we give you, in no particular order: 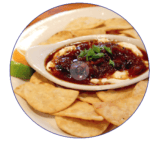 The descriptive name of this appetizer probably already has you salivating, but here’s a little more detail to seal the deal: jalapeño cream cheese topped with grilled peach-and-bacon chutney, served with pita chips. Bouré is at 110 Courthouse Square. 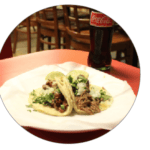 Since its opening several years ago, Mundo Latino has embraced the name it’s become better known by: the Taco Shop. This authentic Mexican eatery and grocery is nestled in the shopping center behind Oby’s (another great place to eat). The Taco Shop’s menu appeal is in its freshness. After sampling the housemade chips and salsa (red or green), go for—what else—the tacos. You could stay safe with beef, chicken, pork, etc., but the unsung hero on this menu is the lengua taco. Main ingredient: beef tongue. Don’t be shy. Tongue-kiss this delicious taco ASAP. The Taco Shop is at 1921 University Avenue. 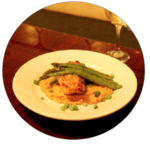 A newcomer to the Oxford restaurant scene, Delta Steak Company’s menu may still be unknown to many in town, but we encourage even the already initiated to stray from steak once in a while and holler at the potato-crusted salmon. Medium-rare, sushi-grade salmon is served atop spicy cheese grits and sautéed spinach. It’s finished with a potato crust and béarnaise sauce. Delta Steak Company is at 1007 College Hill Road. 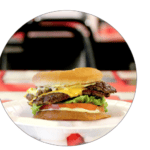 This may not truly qualify as an unknown, but compared to Handy Andy’s hallmark barbecue sandwiches and plates, the double cheeseburger isn’t the most famous thing there. Those who order it, though, know why it’s on this list. In a town with a stunning number of fantastic burgers on restaurant menus, the Handy Andy double deserves notice. Handy Andy is at 800 North Lamar Boulevard. 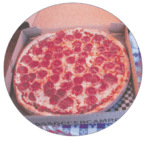 Pepperoni Pizza — 6 ‘n’ Tubbs
Pepperoni pizza might not sound like a “lesser known” menu choice, but the pep pie at 6 ‘n’ Tubbs is unique in Oxford. We love the variety of pizza in Oxford, from Square Pizza’s Ohio version to the Fat Larry at Proud Larrys’ to Old Venice’s creative flavor profiles, but what’s special about 6 ‘n’ Tubbs’ pizza is its good old floppy New York-style pie. You know, the kind you can fold and eat like a sandwich. 6 ‘n’ Tubbs has developed a strong cult following in Oxford by word of mouth, but we’re still calling it an unsung treasure here because it’s off the beaten path and to make sure you check it out if you haven’t already. 6 ‘n’ Tubbs is at 2625-D West Oxford Loop. 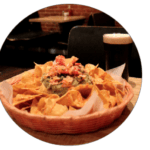 Chef Jon Myrick was part of the team that opened 208, whose signature appetizer was its piled-high lobster nachos. He’s now at Proud Larrys’, and with 208 gone, he’s seen fit to create a version of lobster nachos to the Larrys’ menu. This new incarnation’s vitals are as follows: chilled lobster knuckle salad, avocado salsa, and Sriracha sour cream on house-fried corn tortillas. Proud Larrys’ is at 211 South Lamar Boulevard.

Gyros, salads, Greek-influenced pizzas, and stellar Margaritas attract a steady flow of Oxonians to the outdoor deck and former filling-station-garage dining room of local favorite Volta Taverna. But don’t overlook the Hotty Toddy Balls appetizer. They look like hush puppies, but you won’t be able to keep quiet about them after trying them. Maybe that’s why they’re named after a cheer. We’re talkin’ fried garlic mashed potatoes mixed with bacon and mozzarella. Flim flam, bim bam, open mouth, proceed to cram. Volta Taverna is at 710 North Lamar Boulevard.

The Rib Cage bills itself as the place “Where Oxford Eats Ribs,” but beyond the bone, they’ve put a lip-smacking spin on that tried-and-true flavor vehicle, the quesadilla, incorporating their barbecued pork. It’s simple, savory, and satisfying. The Rib Cage is at 311 South Lamar Boulevard.

Even if you think you don’t like pork skins, hear us out. You’re gonna. These housemade pork skins are made to order and come out hot in your choice of flavors: plain, salt and vinegar, barbecue, and hot. Order a couple flavors and pass them around the table. Our favorite is the salt and vinegar. Lamar Lounge is at 1309 North Lamar Boulevard. 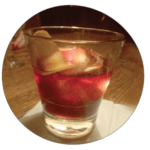 Finally, to wash it all down, we want to showcase a cocktail. A very important note: Snackbar’s cocktail menu features a number of new drinks each season. We advise you to stop in often and taste what’s new in the glass from time to time. That said, you can’t go wrong with the list of House Classics that stick around all year on the drink menu. It’s hard to pick a favorite, but we certainly love the Man-Fashioned hybrid of the Old Fashioned and Manhattan, made with Old Weller Antique bourbon, Dolin Rouge vermouth, Cherry Heering liqueur, Angostura and whiskey barrel-aged bitters, and flamed orange peel. Honorable mentions include the Bay of Pigs (a dark rum drink) and anything Snackbar does with tequila as its base spirit (we know what you’re thinking, but trust us on this). Snackbar is at 721 North Lamar Boulevard.
— Tad Wilkes and staff reports, tad.wilkes@hottytoddy.com
Thanks to Loyd Smith of Bouré for his contributions to the list