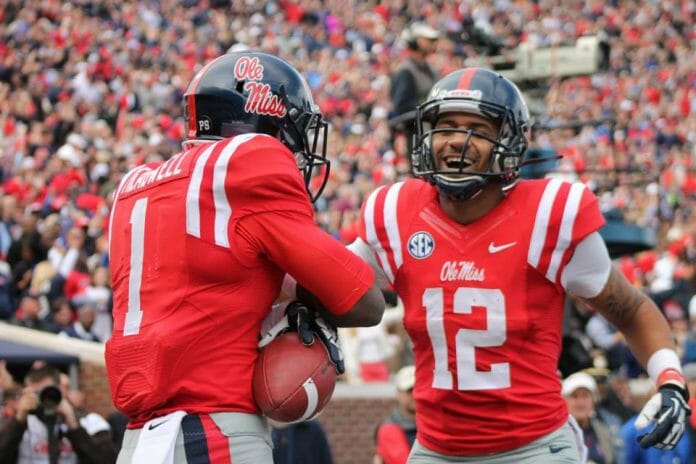 If you’re like me you spent some of this weekend watching the NFL combines.
I zeroed in on former Rebel wideout Donte Moncrief and he didn’t dissapoint. In fact Moncrief showed he knew what he was doing when he opted for the NFL draft by running an official  4.40. He unofficially ran a 4.35 on his second run.

The Rebels’ leading receivering last year with 938 yards and six touchdowns, Moncrief showed ha has the size and speed to turn the heads of NFL scouts.He is only 21.

The problem for Donte is there are so many stars in this year’s receiver class for the draft. The experts are saying round 2-4 is where the Rebel speedster will be picked.

Here is what some NFL scouts are saying about him

Terrific size. Smooth accelerator — jets off the line, eliminates cushion and has speed to stretch the field vertically. Good balance and body control. Can stem his pattern and leverage defenders. Drives off cornerbacks and creates separation. Knows where the sticks are. Outstanding leaping ability to elevate and pluck throws out of the air. Flashes playmaking ability. Able to sidestep the first tackler and pick up chunk yards after the catch. Gives effort as a blocker to engage and seal. Has experience going head-to-head with NFL-caliber cornerbacks. Will be a 21-year-old rookie and has upside.

Needs to sharpen his route running. Inconsistent ball reactions, particularly in traffic — better running through or under passes. Does not always play to his size — gets outmuscled for “50-50” balls and is still coming into his own as a dependable go-up-and-get-it guy. Average hand strength. Tends to trap some throws against his body and occasionally drops catchable balls. Could be more physical. Average elusiveness and open-field electricity. Showed he could be contained — seven games of 60 yards or less as a junior.

Big, physically gifted “X” receiver with deep speed, “above-the-rim” potential and playmaking ability. Has a ceiling as a No. 1 or No. 2 in a vertical passing offense, and his best football is in front him. Likely to elevate his stock at the combine and in workouts.
Information courtesy of NFL.com and Red Cup Rebellion