While its “dive” persona has not hurt its ability to attract customers for the five years since Frank and Marlee’s opened just off the Square in Oxford, owner and Oxford-native, Todd Lynch decided that it is time to re-vamp. 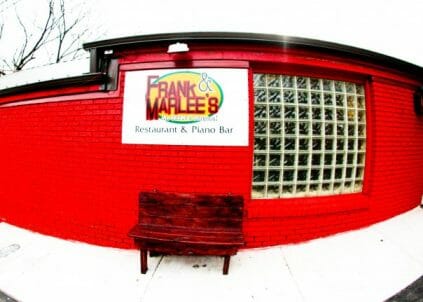 The simple, rustic appeal of Frank and Marlee’s has been a draw for many Oxford-goers since September 2009. The worn, wooden tables and sheets of tin lining the walls give the bar an informal atmosphere for people to socialize and enjoy entertainment.

Lynch recently hired Chef Quinn Chandler and business has improved, in fact, according to Lynch, this is one of their best years yet. Striving to have as much food made in house as possible, Chandler is smoking meat, making fresh burgers, and will soon be updating the Frank and Marlee’s menu.
“We’re stepping everything up a bit from dive bar and regular bar food,” Lynch said.
In addition to new menu items, Frank and Marlee’s is updating their drink specials weekly.


The bar itself downstairs, with its casual familiarity and dueling pianos, will remain unchanged. Lynch is seeking to make the restaurant aspect of Frank and Marlee’s more structured, including consistently delicious food and regular table service. He has plans to do some light remodeling on the deck and downstairs starting this summer.
Lynch has been in the restaurant business for quite awhile, working just about everywhere between Memphis, Tenn. to Jackson, Miss. After leaving a management position at McAlister’s Deli, he decided that having a business of his own was the next best move.
The laid-back, friendly staff at Frank and Marlee’s adds to the charm of the piano bar and restaurant.
“We’re just local people doing the local thing,” said Lynch.
Frank and Marlee’s in located at 1210 Harrison Ave., just off the Oxford Square where Murph’s and Irelands were once located. Visit Frank and Marlee’s on Facebook or their website at www.frankandmarlees.com.
Rachel Vanderford, staff writer at HottyToddy.com, rmvander@go.olemiss.edu
Facebook
Twitter
Pinterest
Previous article
Vintage, Antique, or Crafty: Sugar Magnolia Offers It All
Next article
Summers Wins C Spire Howell Trophy