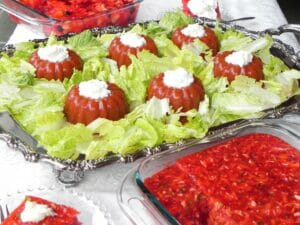 Tomato aspic is totally chick food. Its peculiar flavor blends well with cottage cheese and salads. My recipe is a variation of numerous versions, some with and some without added veggies, some with only unflavored gelatin, and some with plain tomato juice. NOTE: Canned tomato juice and V8 Juice contain high percentages of sodium. Try experimenting with additions such as green onion, chopped olives and artichoke hearts. Substitute fresh lemon juice and a third package of unflavored gelatin for the sweet lemon gelatin.

Spray 8-inch square dish, single large mold, or 6 individual molds with nonstick cooking spray (I used a mini-bundt cake pan).
Dissolve unflavored gelatin in the cold water. Heat V-8; add bay leaf and the unflavored gelatin. Bring to a boil, stirring. Remove from heat, remove bay leaf. Stir lemon gelatin into hot mixture until dissolved. Stir in remaining ingredients until completely mixed.
Pour into square dish, large mold, or individual molds. Loosely cover with waxed paper that has been oiled with nonstick cooking spray. Chill 4 hours, until completely firm.
Unmold by placing gelatin mold in shallow pan of warm water for about 10 seconds. Run a sharp knife carefully around the edges to loosen from the sides. Flip onto a lightly oiled serving dish (to prevent sticking and make it easier to reposition). Garnish with lettuce leaves and cottage cheese or mayonnaise (or both).
ROSE OF SHARON SALAD (MOLDED CABBAGE SALAD) 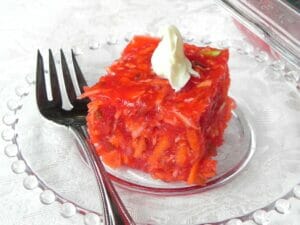 This Tennessee version of a sweet AND savory luncheon salad is closely related to tomato aspic. The folksy name “Rose of Sharon” has long been popular in American plays, books, poems and songs, and is the name of a flowering shrub that flourishes in the American South. Its Biblical origins date back to the 1611 King James translation of the Old Testament Song of Solomon 2:1 — “I am the rose of Sharon, and the lily of the valleys…”

10-oz can of condensed tomato soup

Combine water, vinegar and sugar in a medium saucepan and bring to a boil. Add the raspberry-flavored gelatin and stir until dissolved. Remove from heat.
While raspberry gelatin mixture is cooling, combine the tomato soup and unflavored gelatin in a mixing bowl. Add remaining ingredients; mix well. Pour raspberry gelatin into the veggie mixture and stir with large spatula or wooden spoon until completely blended.
Spread into oiled decorative mold or 8-inch square dish. Refrigerate overnight. Unmold by immersing bottom in pan of warm water for a minute; wipe bottom of mold to remove all water, and turn out onto a plate lined with lettuce or spinach leaves. Serve with dollops of mayonnaise or sour cream. It’s a terrific complement to a fish entrée. YIELD: 6-8 servings.
VARIATION: Substitute lime gelatin for the raspberry, and whip the partially set gelatin with mayonnaise, cottage cheese, or cream cheese.
MOLDED STRAWBERRY FRUIT SALAD 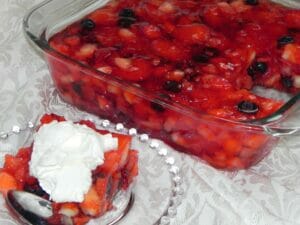 This is an excellent substitute for dessert and a good use for leftover bits of fresh fruit (remember the no-no’s of papaya, kiwi, fig, and pineapple). The cook can be as creative as the pantry and fridge allow. Feel free to mix whipped cream into the gelatin along with chopped nuts. Another version calls for orange gelatin with canned mandarin orange slices substituted for the strawberries. Whenever I add fruit to gelatin, I prepare the gelatin with the quick-set method because it requires less water, which offsets moisture in the fruit.

Prepare a large mold or 8-inch square dish by oiling with nonstick cooking spray. Bring 1-1/2 c water to a boil and pour over the two packages of gelatin in a large mixing bowl. Stir until gelatin dissolves. Add the 2-1/2 c of water and ice, stirring until gelatin begins to thicken (you will notice the liquid thickening on the bottom when stirring). Remove unmelted ice. Place gelatin in fridge for 30 minutes.
Combine the fruit, tossing gently to prevent breakage. Cut up bananas at the last minute and refrigerate mixed fruit until the gelatin has begun to set. Fold the mixed fruit into the partially set gelatin and turn out into the oiled dish or mold. Refrigerate overnight. When ready to serve, cut into squares or unmold onto a serving platter and garnish with whipped cream or whipped topping. YIELD: About 6-8 servings.
Laurie Triplette is a writer, historian, and accredited appraiser of fine arts, dedicated to preserving Southern culture and foodways. Author of the award-winning community family cookbook GIMME SOME SUGAR, DARLIN’, and editor of ZEBRA TALES (Tailgating Recipes from the Ladies of the NFLRA), Triplette is a member of the Association of Food Journalists (AFJ),Southern Foodways Alliance (SFA)  and the Southern Food and Beverage Museum (SOFAB). Check out the GIMME SOME SUGAR, DARLIN’ web site: www.tripleheartpress.com and follow Laurie’s food adventures on Facebook and Twitter (@LaurieTriplette).