Food, music and the arts will take center stage at the 19th annual Oxford Double Decker Arts Festival presented by C Spire on April 25-26, 2014.
This year’s event will again feature a two-day format that includes a special edition of Thacker Mountain Radio (at 7 p.m.) on Friday evening and a free concert (a free 6 p.m. pre-show). Saturday activities include art, food and more music, including a day of eclectic music on Caterpillar Stage.
Friday night’s headliner is the Bo-Keys, at 8 p.m. For the full lineup, click here.
Lost in much of the soul revival hype is the fact that many of the originators of soul music are still performing up to their Black Power-era standards.
In the early parts of their careers, members of the Bo-Keys performed in B.B. King’s orchestra, anchored the Hi Rhythm Section, nailed the unforgettable intro to “Theme From Shaft,” and survived the plane crash that claimed Otis Redding.
This is a new, hard-hitting Bo-Keys lineup, featuring alumni both of Stax Records and Hi Records, plus younger musicians who’ve garnered an Emmy award and a Grammy nomination. Together, now, they play fresh Memphis soul. 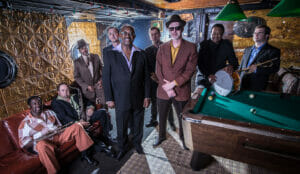 That’s Howard Grimes’ beat you hear on Rufus and Carla Thomas’ “Cause I Love You,” O.V. Wright’s “Nickel and a Nail,” Ann Peebles’ “I Can’t Stand the Rain,” and Syl Johnson’s “Take Me to the River.” Grimes and Al Jackson Jr. shared drumming duties on Al Green hits, alternating between the kit and congas. Grimes learned to play at Manassas High under band director Emerson Able. He turned pro at an early age, laying the beat for Gene “Bowlegs” Miller, legendary Memphis club band the Largos, and for one of Sunbeam Mitchell’s traveling combos before guitarist Teenie Hodges heard Grimes and recruited him to join the house band that producer Willie Mitchell was cultivating at Hi Records in 1967. Mitchell, who liked to keep things loose around his studio, nicknamed Grimes “Bulldog” for the way he clamped down on the rhythm and wouldn’t let go. It’s a few gold records later, but Bulldog’s teeth are sharper than ever.
Like Grimes, organist Archie “Hubby” Turner made his name in the Hi Rhythm Section. Before Hi, Hubby played on collector’s items like the Martinis’ “Hung Over.” Hubby has also entertained thousands of fans as part of the house band at legendary Memphis juke joint Wild Bill’s. His style remains as funky and vibrant as it was on all those O.V. Wright, Ann Peebles, and Al Green cuts.
Trumpeter Ben Cauley was a charter member of the school-kid funk band the Bar-Kays, whose party hit “Soul Finger” helped get them an ill-fated gig backing star singer Otis Redding on the road—Cauley was the only survivor when the plane carrying Redding and the group crashed into Lake Monona near Madison, Wisconsin December 10, 1967. Cauley continued his career with a second incarnation of the Bar-Kays, which functioned as the Stax house band, much as Booker T. & The MGs had in the label’s early years, backing Isaac Hayes on Hot Buttered Soul. As a horn for hire, Cauley wrote the charts for the Staples Singers classic “I’ll Take You There.”
By the time Floyd Newman bellowed “oo-ooooh, last night,” on the Mar-Keys 1961 hit “Last Night,” he had already lived a full, wild life in music. The baritone saxophonist had played in Memphis hustler Andrew “Sunbeam” Mitchell’s Beale Street club and toured the chitlin’ circuit with the big band B.B. King formed in 1955. As one of the first South Memphis residents who caught on as a session player at Stax Records, Newman opened the door for both Booker T. Jones and Isaac Hayes to join. Doors opened for Newman, too. He became an in-demand session man, recording tracks in Muscle Shoals, Alabama and Miami for Atlantic and Fame among others.
Young cats Marc Franklin, Kirk Smothers, Derrick Williams, and Jim Spake round out the Bo-Keys horns.
Bass player Scott Bomar and guitarist Skip Pitts are the founding fathers of the Bo-Keys. They keep the easy-going banter flowing in the studio—before one Got to Get Back session, Bomar told Pitts, (who recorded the wah-wah intro “Theme From Shaft” in 1970) “we need a new guitarist for this track, it’s a funk song.” Pitts brings his otherwise unchallenged funk chops and his gravelly voice to the top of the Bo-Keys’ sound.
Bomar served an apprenticeship with Willie Mitchell, engineering Al Green’s two most recent releases at Mitchell’s Royal Studio. On his own, Bomar composed the soundtrack to the film Hustle and Flow, and the Bo-Keys played the film’s score. Bomar also produced three songs for the Soul Men motion picture soundtrack, including Grammy-nominated “Soul Music,” and the Bo-Keys performed on-screen with stars Samuel L. Jackson and Bernie Mack. The Bo-Keys’ debut effort The Royal Sessions drew raves, and can still be heard in snippets on National Public Radio broadcasts.
While the Bo-Keys’ credentials speak for themselves, you’ll hear that they’re not getting by on reputation alone on the new CD Got to Get Back.
From the opener “Hi Roller,” the record’s 12 original tracks evoke the classic Memphis sound, replete with superhero horns, tight rhythm, and shaggy organ. Skip Pitts’ thorny voice spikes the background here and there, and Otis Clay, Percy Wiggins, and William Bell bring muscular lead vocals to several tracks. But the record is more than nostalgic—Bomar and the band bring fresh style to the timeless sound.
In this age of revival and reenactment, the Bo-Keys are classic, straight-up soul.