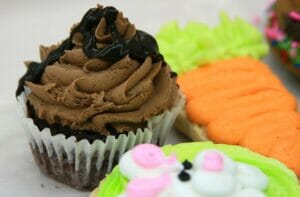 Oxford has a new confections store, where customers will find icing-covered cakes, cookies and petit fours.
Kelli’s Cakes & Confections, at 1944 University Ave., had a grand opening for a few hours Saturday, and is now open six days a week.
Owner Kelli Smith Russell said that by 2 p.m. Monday, they had sold out of strawberry cupcakes and were busy in the kitchen making a new batch.
Her favorite, however, is the Double Doozie, a sandwich made of two chocolate chip cookies with icing in the middle, with multi-colored sprinkles forming a sugary band around the icing.
Add to those offerings three other cupcake flavors, seven cakes with seven frosting options, and several varieties of cookies, including the popular white chocolate macadamia, Heath bar cookies and iced cookies.
Right now, Russell said, they’re starting out slow with smaller orders, although the store already has its first big order. Theta has ordered 1,000 cupcakes for a philanthropy event next week, and that’s just one of the reasons she has so many family members and friends in the kitchen helping her out.


One of those people is Deanna Denney, who many longtime Oxford residents will recognize as the former owner of Deanna’s Confections. She has made confections for about 30 years, and had a store on Jefferson Avenue until she sold it in 1999.
She’s “like a member of the family,” Russell said, and Miss Deanna made her mother’s wedding cake 31 years ago and made all her birthday cakes growing up.
“I have a great support system,” she said.
Russell started out as an intern at Emileigh’s Bakery and decorated cakes there for three to four years. But the first person who taught her how to cook was at home.

“My mom, she’s been baking out of her home for years. I learned from her,” Russell said.
Kelli’s Cakes & Confections is taking orders for school Easter orders and custom cake orders, along with orders for offices and small groups. The store can be found on Facebook.
Its current hours are Monday from 12 p.m.-5:30 p.m., Tuesday through Friday 10 a.m.–5:30 p.m. and Saturday from 9 a.m.-2 a.m.
Gretchen Stone is HottyToddy.com associate editor. Gretchen can be contacted about this story at Gretchen.Stone@HottyToddy.com
Facebook
Twitter
Pinterest
Previous article
Three Battle For Ole Miss Backup QB Job
Next article
Stories from Rebels who Travel