The End of All Music Celebrating Record Store Day With Food, Drink, a Special Cassette and More 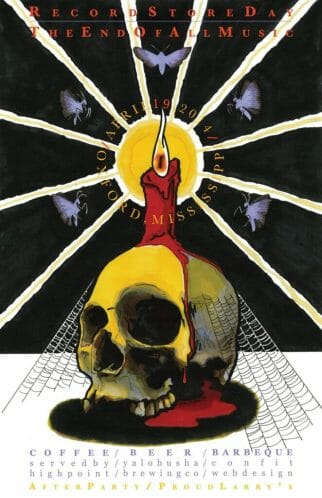 Saturday, April 19, from 10 a.m. to 6 p.m., the End of All Music record shop is celebrating Record Store Day, a national day in honor of independent record stores and labels.
“In the past we’ve had special events planned for the day but this year we really wanted to amp it up and make it more about the community surrounding the End of All Music,” states a press release from the shop. “In short, Record Store Day is about more than just selling limited edition records. It’s about bringing a community together to celebrate music and hanging out with friends.”
First up, the End will be releasing a limited-edition cassette compilation featuring all Oxford-based musicians. This release will only be available from the store on Record Store Day in a limited run of 250 copies. All of the proceeds from the sale of the release will go directly to MusiCares—the  musician assistance charity through the Recording Academy of America. Proud Larrys’ will host an official after-party featuring many of the bands from the compilation. The show will start at 8 p.m. tentatively and will have a $10 cover fee at the door. Any remaining copies of the cassette will also be for sale at Proud Larrys’ during the show.
They’ll also have a limited edition t-shirt to commemorate record store culture designed by J. Burwell. The shirts will be limited to 50 and are surely to sell out quickly.
Len Clark designed the poster for this year’s Record Store Day. The poster will also be for sale in an extremely limited quantity. The first five people in line when we open will get a free poster as well.
The Liberal Arts 102 class at the University of Mississippi has been studying music writing this semester, while also writing some of their own. “We thought it would be cool to pick some of our favorite pieces from the class and collect them in a ‘zine,” the release states. “The ‘zine will feature the best writing from the class and will be given out for free to folks that come by the record store on Record Store Day. These will be available while supplies last. The first five folks in line when we open will also get a copy of the ‘zine.”
Food and drink will be offered throughout the day provided by local businesses including High Point Coffee, Yalobusha Brewing Co., Mary McGuires Cakes, and Confit Web Design. High Point Coffee will be selling cups of fresh-brewed coffee all morning starting at 9 a.m.
“We open at 10 a.m. but we know lots of folks like to get their spot in line early, so now you can drink some coffee while waiting for the store to open,” the release states. “Coffee will be $1 a cup and all the proceeds will go to MusiCares. Starting around 2 p.m., we’ll tap a keg of special Record Store Day brew from Yalobusha Brewing Co. out of Water Valley, Mississippi. We’re calling the beer Straight to Tape IPA, and it’ll be free until it runs out. Our buddies, Mary McGuires Cakes of Tupelo, Mississippi will be providing record-themed sweet treats throughout the day. And last but not least, James Kellaway of Confit Web Design, will be smoking complimentary pulled pork all day.”
Cole Furlow of Dead Gaze will provide entertainment in the afternoon, spinning records in front of the store starting around 2 p.m.