Wonder Why Crawfish is $7 per pound? Look to the Chilly Weather

Cars clustered at the three-way intersection at College Hill Rd. and McElroy Dr. as people walked to and from Bikini Beer and P-Reaux Shrimp and Crawfish.
A spotted dog bounced along the Bikini Beer building, sneezing whenever it ventured near the crawfish truck. 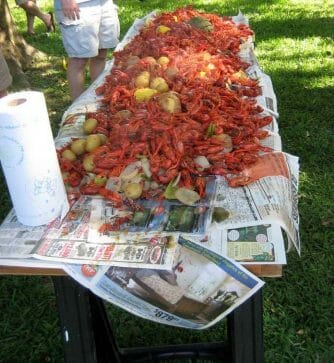 P-Reaux Shrimp and Crawfish is a street truck managed by Josh Ryan, a junior at Ole Miss, with his friend Kevin George. It is open Thursday through Saturday with sales at the Library Sports Bar on weekends. George has on a white tank emblazoned, “Salt Life: Catch of the Day!” He and Ryan reclined in the sun as soon as they were done servicing customers.
“I’ve been selling crawfish here for three years now,” Ryan said, “I’ve had experience selling crawfish since I was thirteen.”
He excused himself to serve a smiling lady with bright red lips, quickly pouring crawfish out of the street truck’s boiler. He washed his hands in the sink after.
He looked at George and out at the streets, nodding, “This is a pretty day, the weather is great.” George said, “The cold weather is coming back next week. There’s supposed to be a chill.”
The statement was met with a shaking head.
“April’s the busiest month of the crawfish season,” Ryan said, “Lots of sales through to end of June, though the cold weather is hiking the crawfish prices up.” Ryan purchases his crawfish from the Louisiana coast and sells in Oxford. He said that the colder weather hiked up the crawfish sales to “about eight dollars a pound or so,” he said.
Clint Peterman, who co-owns another local crawfish outpost, Dixie Crawfish Company, noted the long winter.
“The catch was down drastically,” Peterman said, “It seems to be rebounding higher. The prices are higher this year and in turn has affected sales.”
The crawfish are advertised by the business at five to six dollars per pound, but the company notified the customers on its Facebook page to call them for price estimates per day.
This past weekend, the company cleared out of its 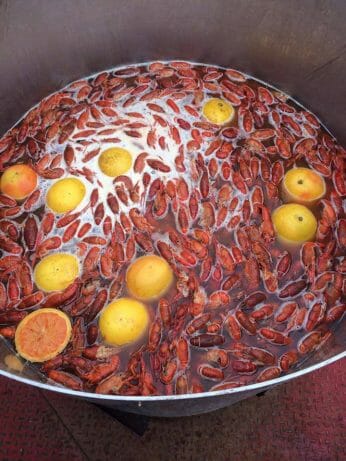 small yellow house just a ways from Handy Andy’s on N. Lamar Blvd. to sell live and cooked crawfish from their trucks in Oxford and Tupelo and at the University’s fraternities’ spring parties. The company’s yellow flags fluttered brightly throughout Oxford on that warm Saturday.
“We did some catering this weekend for the spring parties,” Peterman said, “They go well. We’ve been doing those for eight years, we have good repeat businesses and a great location here.”
P-Reaux and Dixie Crawfish Co. have a new competitor this crawfish season in Oxford: Southern Water Seafood & Crawfish Company, owned and operated by Tanner Pranich. As a Gulfport native and an Ole Miss graduate, Pranich chose Oxford as a site for his seafood business.
“I finished (school) recently,” Pranich said, “and decided I needed a job, so I took a gamble and decided to sell crawfish here. I come from a family who deals in crawfish.”
The crawfish season has been fruitful for him. Pranich said, “So far it’s been great. It’s our first year in Oxford. We’ve been doing a lot of catering and selling live bags. It’s been great overall.”
His business is available for ordering on the website: www.southernwaterseafood.com. Not only does he sell crawfish, but he also provides shrimp, crabs, and numerous breeds of fish, depending on the season. The price range fluctuates so, according to its website, it would be best to call or email ahead to ensure fresh orders.
The long, cold winter also affected Pranich’s production in Gulfport:

“In the beginning the demand was so high and the price was so high for crawfish that we initially only took pre-orders from people who really wanted some,” Pranich said, “The crawfish weren’t reproducing in our ponds (in Gulfport) as well in winter and we couldn’t sell them on trailers.”
But with the warmth of spring the business is building upwards.
“Now we’re back on track,” Pranich said, “(We) bounced back in our sales and we’re trying to keep our prices low.”
The nearly 30-degree chill this week doesn’t seem to have spooked away the crawfish companies as they continue to serve up spicy crustaceans to smiling Oxonian faces every weekend from Thursday onwards to Sunday. 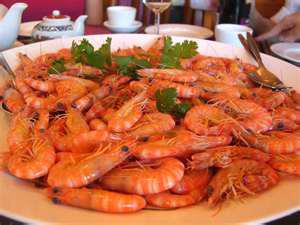 – Callie Daniels is a staff writer for HottyToddy.com. She can be reached by email at cadanie2@go.olemiss.edu.