Baseball
Ellis,Trent Named to Pitcher of The Year Watch List 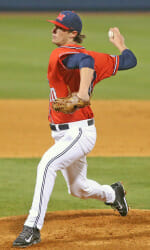 A pair of Ole Miss pitchers found themselves on the watch list for Pitcher of the Year when right-hander Chris Ellis and left-hander Christian Trent were tabbed by the College Baseball Foundation for consideration recently.
The duo are a group of nine players from the Southeastern Conference to be named to the list and Ole Miss is one of only two schools in the league to have more than one pitcher on the initial 47 man watch list.
The Pitcher of the Year Award, sponsored by Diamond, will be presented during the National College Baseball Hall of Fame’s annual Night of Champions on June 28 in Lubbock, Texas.
Ellis anchors the Friday night spot in the weekend rotation for the Rebels and holds a 6-0 record on the year with a 1.81 ERA through 11 starts. In five of those starts, Ellis has not allowed an earned run and also tallied a complete-game shutout of Georgia State earlier this season.
The right-hander has posted 46 strikeouts and allowed only 22 walks with 14 earned runs in his 69.2 innings of work this season. Ellis has posted seven quality starts this season.
Trent also holds a 6-0 record on the year as the Saturday starter for the Rebels and has tallied nine quality starts. He also holds a 2.25 ERA this season and his 58 strikeouts and 72.0 innings of work leads the team in both categories. He also has held opponents to a team-best .223 batting average against while walking only 12 batters in his 11 starts.
The southpaw tossed a complete-game shutout of Auburn to help the Rebels post a series sweep of the Tigers, one of three series sweeps in SEC play this season for Ole Miss.
–Bill Bunting, Ole Miss Sports Information
ROBINSON NAMED TO WALLACE AWARD WATCH LIST


Freshman shortstop Errol Robinson has been named one of 32 members of the 2014 Brooks Wallace Award watch list honoring the nation’s top shortstop when the College Baseball Hall of Fame announced the initial list recently.
The annual award is presented by Mizuno will be presented during the National College Baseball Hall of Fame’s Night of Champions on June 28 in Lubbock, Texas.
This season, Robinson is hitting at a .290 clip and has started 43-of-42 games played for the Rebels. He has scored 15 runs and added 11 RBI. He turned in his best offensive performance in a series sweep of Auburn, going 5-for-11 with two walks, an RBI and a run scored for the weekend.
Robinson is one of five players from the Southeastern Conference named to the initial list and is one of only five freshmen nationally named to the initial list. He is also the first true freshman to start at shortstop on opening day for the Rebels since Zack Cozart in the 2005 season.
–Bill Bunting, Ole Miss Sports Information
Rifle
Ole Miss Rifle Inks Sarah Sroka 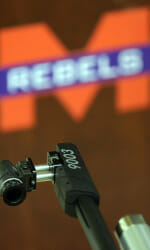 The Ole Miss women’s rifle team bolstered its future with the signing of Sarah Sroka, head coach Valerie Boothe announced Wednesday. Sroka will join the Rebels beginning in the fall.
Sroka, a native of Somerset, Pa., won the Gold medal with her team at Frazier Simplex for the NRA Smallbore Regionals. Last summer, Sroka also competed with Ole Miss team member Nicolle Thiry in the 4H National Shooting Sports competition in Grand Island, Nebraska where they captured second place team nationally in 3P smallbore.
“We are really excited to have this young lady join us,” Boothe said.  “She has had a great junior shooting career and we are looking forward to seeing her continue that success in college.”
In addition, Sroka won the Bronze medal at the Pennsylvania Junior Olympics and competed this past year in the National Junior Olympics in Colorado Springs.
An outstanding student, Sroka plans to major in business with the goal of attending law school.  She interns with the Somerset County District Attorney’s Office in Somerset, Pa.
Follow the Rebels on Twitter, @OleMissRifle and on Facebook at OleMissRifle.
Track and Field
Ole Miss’ Mary Alex England Named SEC Freshman Of The Week
Ole Miss distance runner Mary Alex England was named Southeastern Conference Women’s Freshman of the Week Tuesday after her record-breaking performance at the Drake Relays last week.
Running in her first ever competitive 10,000-meter race, England broke the school record and captured the event title at the prestigious track & field meet.
England crossed the finish line first in 34:48.66 to defeat a field of 26 runners. Her time broke the previous school record of 34:59.20 by more than 10 seconds. She earned the fifth Drake Relays title in Ole Miss women’s program history and the first since 2009 (sprint medley relay).
She now ranks eighth in the SEC overall and fourth among freshmen in the 10K.
This is the first SEC weekly honor of England’s career.
Ole Miss has one more meet before the SEC Championships. The Rebels will head down to Baton Rouge, La., for Saturday’s LSU Invitational that will pit some of the nation’s top teams against one another. In addition to LSU and Ole Miss, the scored meet will feature the Florida Gators, Texas A&M Aggies and Miami Hurricanes.
–Ole Miss Sports Information
Men’s Tennis

Scholtz Earns Automatic Bid In NCAA Singles
All-American Nik Scholtz would like nothing better than to lead the Ole Miss men’s tennis team back to the NCAA Sweet Sixteen, but he also has a goal of an winning an NCAA Singles Championship.
Scholtz, who was named SEC Player of the Year, last week, will begin his quest for an individual title May 21. He earned the SEC’s automatic bid to the NCAA Singles Championship as a 9-16 seed.  It marks the third straight year for Scholtz to be seeded in the field of 64.
The Caledon, South Africa native reached the Elite Eight in his freshman campaign in 2012 on his way to becoming the 27th All-American in the history of the program, but last year he lost in the first round.  This year Scholtz hopes to make a run for the title.
“I am feeling really confident right now and physically I feel as good as I ever have,” Scholtz said.  “I really want to make a run this year.  My freshman year I was able to make the top eight, but the biggest reason I lost, was physically I wasn’t fit enough.  My body couldn’t hold up to even challenge the guy in the quarterfinals.  This year, I feel like if I go out there and fight hard and have the right mentality, I can definitely make something happen.”
The singles and doubles competition will be conducted May 21-26 at the Dan Magill Tennis Complex in Athens, Ga., following the conclusion of the team championship, which runs from May 15-20. The University of Georgia will serve as host.
The Rebels earned their 21st consecutive NCAA Team Championship bid and will head to South Bend, Ind., next weekend to face Northwestern in the first round Saturday, May 10 at 10 a.m.
–Ole Miss Sports Information
Facebook
Twitter
Pinterest
Previous article
Photo Gallery — A Cold Night at Swayze
Next article
Henderson Plays in TBT Tourney in Philly, Needs Fan Help