May 2, 2014
0
469
Ole Miss Football’s 2014 home opener versus Louisiana-Lafayette on Sept. 13 has been assigned a 3 p.m. CT kickoff on the new SEC Network.
The Southeastern Conference’s new national sports network launching Aug. 14 and operated by ESPN will air a game featuring all 14 league football teams within the first four weeks of the 2014 season. The first 16 games, released Thursday by the SEC and ESPN, include a home game from all 14 SEC football stadiums.
“The fact that the SEC Network will originate a game from every stadium in the conference in the first four weeks of the 2014 season is testament to the depth of coverage fans can expect from the network,” said Mike Slive, SEC commissioner. “In just the first month of the season, fans that get the network will enjoy all the passion and pageantry of SEC football from 14 of the greatest venues in the world of sports. This is what the SEC Network is all about.”
“The network will have a terrific line-up of games over the first four weeks. The schedule includes quality and depth from across the conference,” said Justin Connolly, ESPN senior vice president, college networks. “The full breadth of teams and stadiums showcased in the first month alone speaks volumes on the type of programming sports fans should expect on the SEC Network.”
On Saturday, Sept. 6, the SEC Network will showcase six different matchups. Each of the games will be available to all fans who receive SEC Network. The games will be televised on either the SEC Network or an overflow channel made available on that Saturday.
Week three is punctuated by an early-season conference match-up between Kentucky and Florida. In week four, the SEC Network will have two yet to be determined matchups to complete the Saturday tripleheader. Television selections for the remaining games in the opening weeks of the season will be announced at a later date and will air on CBS, ESPN, ESPN2, ESPNU or FSN.
It was previously announced that the Rebels’ season opener (Aug. 28 vs. Boise State in Atlanta’s Georgia Dome) will air at 7 p.m. CT on ESPN.
2014 SEC College Football Schedule (subject to change): 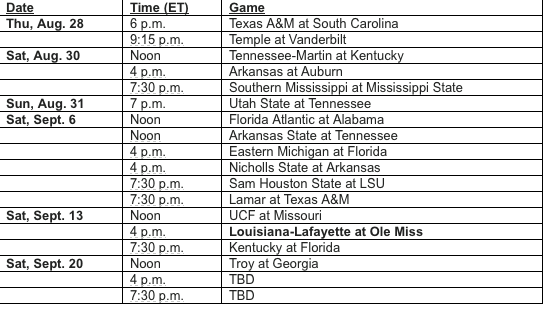