The University of Mississippi’s Commencement this year, on May 10 at 9 a.m., will be the first pro-equality commencement in the school’s history. You could even say it’s going to be a gay old time.
That’s because students, faculty and staff at UM plan to peacefully protest with a rainbow of stickers during the commencement speech by Gov. Phil Bryant. Their silent protest is against the discrimination made allowable under the state’s new Religious Restoration Act, which takes effect July 1.
Bryant signed the Religious Restoration Act, otherwise known as gay Jim Crow, into law April 3. Bryant claims the act protects individuals’ religious freedoms from government interference, according to a statement he released at the time. 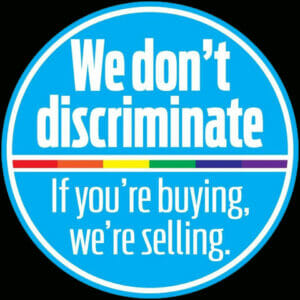 Local and national critics say it opens the door up wide for random acts of discrimination by business owners against gay customers. Some Mississippi business owners have already started fighting back against the act, with stickers and messages that emphasize acceptance of all customers.
The newest wave of opposition to the bill signed by Bryant, which admittedly was passed by a majority of state legislators, is coming from the Oxford and university community.
Oxford chef John Currence and other prominent southern chefs will host a protest dinner in New York City to coincide with the annual Mississippi in the Park picnic in June.
And before that, the university community is passing out stickers, readying itself for the peaceful protest against Bryant.
On the day Bryant signed the act, the William Winter Institute for Racial Reconciliation and the Sarah Isom Center for Women and Gender Studies issued a joint statement affirming their opposition to SB2681.
That message, in part, reads:
“Members of the University of Mississippi community are deeply concerned about the consequences of SB2681, a bill that reaffirms the ability to legally discriminate against the LGBTQ community and also gives license for all sorts of physical, spiritual, and psychic violence against LGBTQ residents of Mississippi. Such a bill compromises the civil rights of all of the state’s residents because this bill sets a precedent for legal discrimination.”
At this difficult time, we wish to reaffirm the University of Mississippi’s commitment to diversity, inclusion and support of our LGBTQ members of the campus community. … Most importantly, they are our colleagues, mentors, and friends and we are grateful for their presence in our campus community.”
Gretchen Stone is associate editor for HottyToddy.com. Gretchen can be contacted about this story at Gretchen.Stone@HottyToddy.com.