May 19, 2014
11
1596
Ole Miss’ junior outfielder Auston Bousfield was named the 2014 recipient of the C Spire Ferriss Trophy at a luncheon on Monday afternoon presented by the Mississippi Sports Hall of Fame and Museum.
The C Spire Ferriss Trophy is presented annually to the top collegiate baseball player in the state of Mississippi and is named for “Boo” Ferriss, former Delta State head coach and member of the Mississippi Sports Hall of Fame, Delta State Hall of Fame and Boston Red Sox Hall of Fame.
Bousfield is the fifth Ole Miss player to be named a C Spire Ferriss Trophy winner. He joins previous winners Stephen Head (2004), Brian Pettway (2005), Scott Bittle (2008) and Drew Pomeranz (2010) in claiming the award.
The Oakland, Florida, native has been one of the top players in the rugged Southeastern Conference this season as he helped Ole Miss post a 40-16 record on the year and claim the SEC Western Division championship with a 19-11 mark in SEC play.
Bousfield ranks among the league leaders in several offensive categories at the end of the regular season, pacing the league in hits (83), and also ranking among the league leaders in batting average (3rd – .353), total bases (4th – 117), runs score (6th – 47), RBI (6th – 45), stolen bases (6th – 16), slugging percentage (7th – .498) and doubles (10th – 15).
He exploded offensively when he helped lead the Rebels to a series sweep on the road at No. 17 Kentucky, batting .714 for the weekend with eight runs scored and seven RBI to garner SEC Player of the Week honors and national Hitter of the Week honors from the National Collegiate Baseball Writers Association. 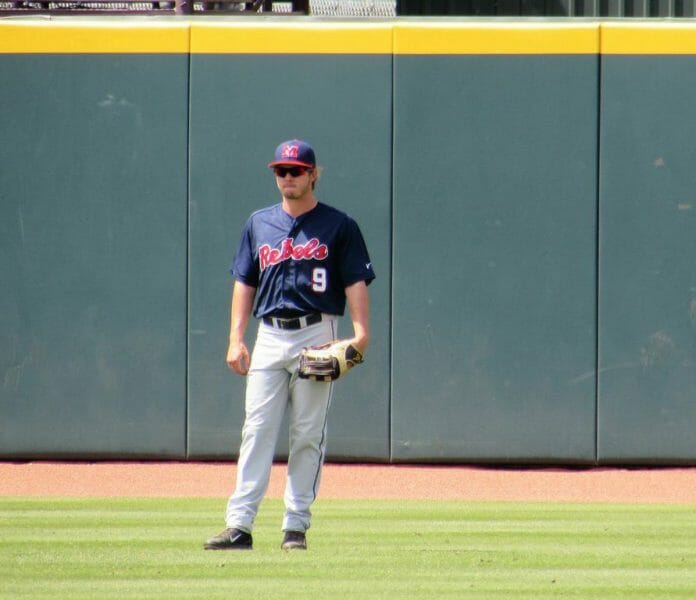 Bousfield has been stellar defensively at centerfield, committing only one error this year that came in the final game of the regular season at Texas A&M. For his three-year career, the senior has committed only two errors and is fielding at a .995 clip.
In addition to his Player of the Week performance at Kentucky, Bousfield came up big two weekends ago in a series win over Georgia, driving in both runs in the series-clinching Sunday win over the Bulldogs in 10-innings.
He has also been named as a semifinalist for the Gregg Olson Award, honoring the breakout player of the year in college baseball.
The junior will take the field again for the Rebels on Wednesday afternoon as Ole Miss opens play at the SEC Tournament at Hoover Metropolitan Stadium in Hoover, Alabama. As the overall No. 2 seed in the tournament, the Rebels received a bye in Tuesday’s action and will face the winner of the first day’s game between seventh-seeded Arkansas and 10th-seeded Texas A&M.