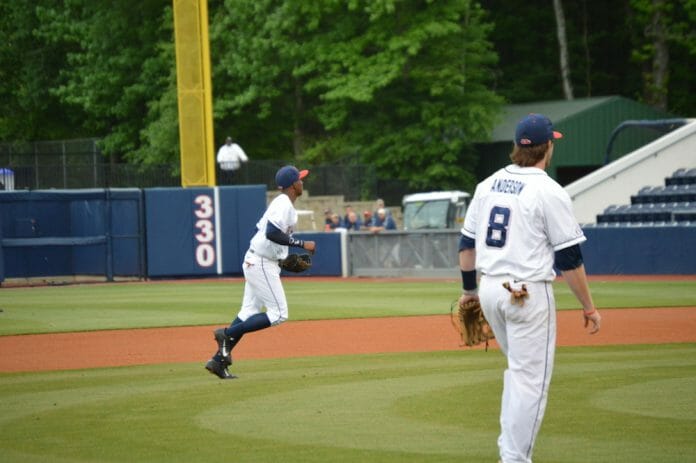 Five Rebels received recognition for their performance in the 2014 season when they were named to All-SEC honor by the league coaches, the Southeastern Conference office announced on Tuesday.
Senior third baseman Austin Anderson, junior outfielder Auston Bousfield and junior first baseman Sikes Orvis were named All-SEC First Team selections, while senior catcher Will Allen was an All-SEC Second team selection and shortstop Errol Robinson was tabbed for the All-Freshman team.
Anderson, one of two captains on the squad this season along with Allen, is hitting at a .329 clip this season with 50 runs scored and 39 RBI. After starting all three prior season at shortstop for the Rebels, Anderson moved to third base for his senior season and helped anchor the infield defense. Anderson went 10-for-16 on steal attempts this season. His 76 hits is fifth in the SEC this season.
Bousfield is hitting at a .349 clip entering the NCAA Tournament and ranks fourth in the SEC in average after leading the league in batting average and hits for most of the season. The junior continues to lead the league in hits with 87 and also tallied five home runs, 46 RBI and a team-leading 51 runs scored. Bousfield is also 16-of-17 on steal attempts this season and has committed only one error in the field – only the second of his three-year career. He was named as the 2014 C Spire Ferriss Trophy winner as the top collegiate baseball player in Mississippi.
Orvis finished the year as one of the top power hitters in the SEC, belting out 12 home runs to finish second in the league in the category. Orvis is batting at a .291 clip heading into the NCAA Tournament, with eight of his home runs coming in SEC play. He also tallied 44 RBI, third most on the team, and posted a .528 slugging percentage – the third best in the SEC.
Allen continues to also be among the league leaders in offense, currently sitting at second in the league in batting average at .352, fourth in the league in slugging percentage at .530, second in the league in hits with 83 and second in the league in RBI with 58. He is ninth in the league in home runs with seven and tied for first in the league with 21 doubles. The senior also is a semifinalist for the Johnny Bench Award which is presented annually to the nation’s top catcher.
Robinson earned All-Freshman team status after becoming the first true freshman to start at shortstop on opening day for the Rebels since the 2005 season. He is hitting at a .315 clip on the year with 21 runs scored and 16 RBI, while going 5-for-8 in steal attempts. Robinson has started 56-of-57 games played this season and is the first Ole Miss freshman named to the All-Freshman team since right-handed pitcher Brett Huber in the 2010 season.
—Bill Bunting, Ole Miss Sports Information