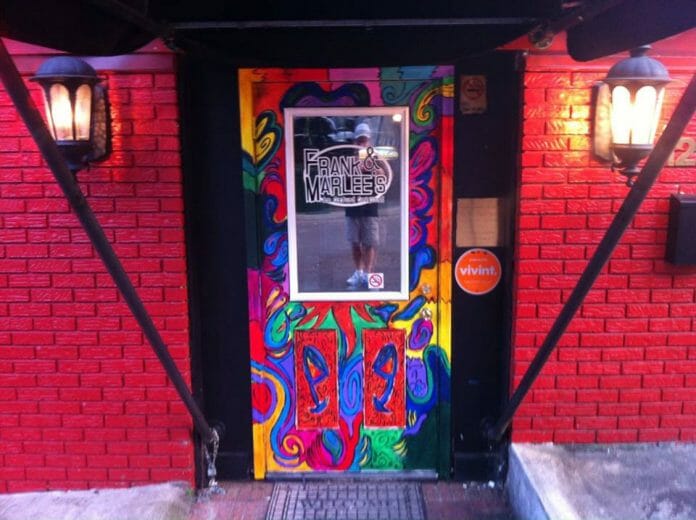 On Monday, architect Corey Alger presented plans—for Carol Tidwell, owner of the building housing Frank & Marlee’s Restaurant & Piano Bar, and It’s Time Oxford, LLC, owner of adjacent property—to the Courthouse Square Historic Preservation Commission for a new commercial and residential structure. The Commission approved the plans, which include tearing down the building housing Frank & Marlee’s Restaurant & Piano Bar.
After a report in The Oxford Eagle about the approval of the plans, Frank & Marlee’s Owner Todd Lynch posted on the business’s Facebook page to say that he wasn’t informed, before the article was published, that the building would be razed and declared that it would not be. Confusion ensued as patrons and others commented, trying to make sense of what exactly is in store for the restaurant.
According to city documents, the demolition was approved. When it will happen remains unclear, but Frank & Marlee’s lease runs into 2016, Lynch said, so reports that the building would be torn down “soon,” may be inaccurate. Also untrue, according to Alger, is any report that Frank & Marlee’s will have space in the new development.
“It is completely understandable that Mr. Lynch would be surprised to hear that the demolition on the Tidwells’ property was imminent, as that is simply incorrect,” said Alger. “Please understand that no timetable has been set for construction or any part of construction, including any needed demolition. As you know, I am working on a project to develop 1200 and 1210 Harrison into a single development.”
On behalf of It’s Time, LLC, and the Tidwells, Alger applied for a Certificate of Appropriateness (“COA”) from the Commission.
“The City requires that property owners request permission to demolish existing structures before they will consider approval of the design of any new structure,” Alger said. “The City posted the usual signs in front of the properties, which were plainly visible, and notified the public about the application and that our application was on file with the City for inspection.”
Lynch said he saw notice signage posted on the 1200 Harrison but nothing on 1210, which is Frank & Marlee’s.
Alger said that before making the application, “discussions were had with Mr. Lynch about the project, including [the project’s] size and scope.”
Lynch, who was in England on honeymoon with bride Ashley at the time of the Monday meeting and at the time of this writing, told HottyToddy.com that an adjacent landowner approached him recently to inform him he would be developing his own property, and asked Lynch if he would be interested in demolishing Frank & Marlee’s and leasing on the first floor of the new development. Lynch said he declined and was not interested in having his restaurant demolished, citing the unique character of his current building and what he saw as probable issues with noise and other concerns being situated below other tenants. That, Lynch said, was the last he heard of any discussion of plans until learning of the Tuesday news report.
Despite Lynch’s expressed disapproval of the razing of Frank & Marlee’s current building and moving the business into a new development, the property owners plan to demolish the Frank & Marlee’s building and develop the property. And Alger said that any report that he informed the Commission that Frank & Marlee’s would relocate into the new project after completion is untrue.
“… [A]t no time have I ever stated or represented that the demolition of the property was coming ‘soon’ or was otherwise imminent,” Alger said. “Again, no timetable has been established for construction or demolition, even though the issuance of a COA is one prerequisite to construction.”
Frank & Marlee’s current space holds a special place in the hearts of many Oxonians, as expressed in Facebook comments recently in the wake of the demolition news, as much for its piano bar fun and popular menu as for its carrying on the legacy of Murff’s and Irelands, two vaunted Oxford haunts that previously occupied the building.
— Tad Wilkes, tad.wilkes@hottytoddy.com