The Sad Story of the Martyr and the Juke Box Repairman

One thing that might have flustered the University of Mississippi journalism community more than anything in my book UNDER FIRE AT OLE MISS is perhaps my treatment of one of the victims who was killed the night of the 1962 riot — French Journalist Paul Guihard.
Most of those journalists familiar with the Agence France-Press reporter’s story are convinced he was deliberately murdered and should be treated as a martyr. The killer has never been officially identified. I know very little about the journalist or his politics.  My conclusion is that he was killed accidentally by a confused Marshal in the initial charge against the rioters, not deliberately.
In my book I record this from a (White) Citizens Council report:
“Prior to his arrival in Oxford, Guihard held several meetings with Southern leaders, presumably in an attempt to provide multiple perspectives in his reporting. Transcripts of those meetings have been difficult to obtain, but mention of at least one such meeting is made by State Senator John C. McLaurin…”
McLaurin said when Guihard came to Mississippi, “He came directly to our citizens council headquarters,’” adding that Guihard had telephoned a story to his editor that was favorable to Mississippi. McLaurin later used Guihard’s pro-Mississippi report as evidence of a motive for a federal marshal to kill Guihard.”

I do not know Guihard’s deep personal and private convictions. Who knows what transpired during Guihard’s meeting with the segregationists in Jackson? And the other man killed that night? Has anyone ever paid much attention to local juke box repairman Ray Gunter?
Gunter’s brother John worked for the campus police that night. Asked if anyone had ever expressed sympathy toward his family with regard to his brother’s death, he was quoted, “No, it just sort of went away and died down.”
Guihard was honored with a plaque in the Meek School of Journalism building and a bench in his honor was dedicated on April 17, 2009 by the University of Mississippi’s chapter of the Society of Professional Journalists.
To my knowledge, no one has seriously attempted to identify who killed either of the two men. Except me.
In my book, I arrived at my own probable scenario.
Once you know the circumstances and the approximate time of death of the two, it’s not an impenetrable mystery. Both men died in the confusion in the clouds of tear gas by the understandably reckless conduct of the Marshals who had surrounded the Lyceum.
There were others with guns on campus that evening. One of them shot at me and my friend Jack. Probably a .22.  I don’t think these shooters hit anyone. Watch  “Who Shot At Dick Gentry” on YouTube.
I expect to have my theory sustained by history once ALL of the Ole Miss FBI files are available in future years with no redacted names or information. That was a huge handicap as I read the 3,000 page FBI report. (I donated the data to the journalism department if you care to read it).
Dr. Kathleen Wickham, Ole Miss Journalism Professor, has been working on Guihard’s death for years. As far as I know, plucky Dr. Wickham has shared her research with no one, not even when investigators asked for it. Her book may clobber my presumptions. I wish her success.

Almost 50 years after the shootings, on May 27, 2009, the FBI released an ERA Cold Case Initiative from the Jackson office. Part of the problem in the released FBI documents, aside from redaction of names and the muddled timeline, is the format and confusions of data.
It is commonly believed that Guihard was killed shortly after the riot began, a little after 8 p.m. In an FBI memo on May 27, 2009, it described a Cold Case Initiative report provided by the Southern Poverty Law Center:
Free At Last: A History of the Civil Rights Movement and Those Who Died in the Struggle. The article was entitled, “In the Center of the Crisis,” which referenced the death of Guihard.
That report says at 8 p.m. a Marshal was hit in the head by someone in the mob and subsequently a shower of rock, brick and bottles came down on the National Guard troops in the area. “The Marshals responded with tear gas and someone in the mob began firing guns. Less than four hours later, Guihard was found dead in front of the women’s dormitory.”
The local Oxford National Guardsmen were pelted as they arrived. I remember it being closer to 9 p.m. or after, but no one in the “mob” returned fire at that time. And it didn’t take “four hours” for Guihard’s body to be found. Although this is an FBI report more than 40 years after the fact, I have to give them a D- as a grade for accuracy.
Within days of the riot, the local grand jury investigating the shootings also screwed up the facts: “Mr. Walter Ray Gunter, 23, was shot to death at about 11 p.m. on September 30. He was standing on some drainage tile, 18 to 20 inches in height, at the southwest corner of the Science Building then under construction…”
The 11 p.m. timeline is much later than it actually occurred. “At the time,” the testimony continued, “the Marshals were firing tear gas into the crowd immediately in front of Mr. Gunter. The Marshals were…armed with .38 caliber pistols as well as night sticks and tear gas guns. …Just prior to the time that Mr. Gunter was shot the crowd had rushed the Marshals and the Marshals were counter charging into the crowd.” 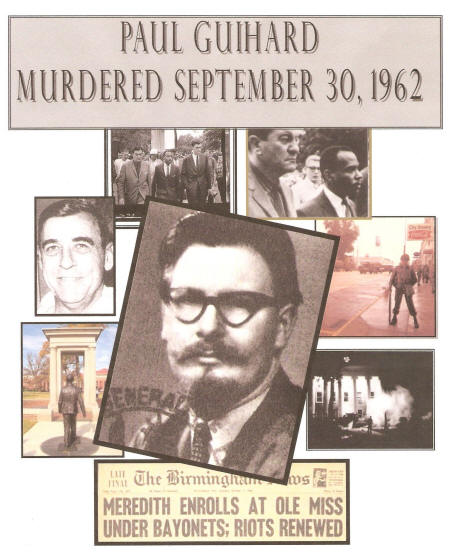 I contend that first skirmish occurred more closely to 8:15 p.m.
In my book, UNDER FIRE AT OLE MISS, I write:
My friend Jack (Bowles) and I watched the fire engine charge the Lyceum. If Marshals were firing in the direction of the truck, they were also firing in the direction of Ray Gunter’s perch on the concrete pipes near the new Science building behind the fire truck.  Stuff happens.
The FBI later admitted that the Marshals fired at the fire truck, although I was the first to report  that fact.
Mississippi Sovereignty Commission Investigator Tom Scarbrough, in the report of his investigation into the riot, said, ‘many other people were talked to, but as yet no one has been found who saw the person who killed Ray Gunter fire the fatal shot.’
I’m sure the Marshal who fired the shots knows.
The timeline is critical, but elusive. The U.S. Department of the Interior’s report said Guihard arrived on campus just as the rioting began. A highway patrolman warned him it was unsafe on campus, but Guihard charged ahead. His photographer, Flip Schulke, unsuccessfully “admonished the Frenchman to take cover.”
According to the report, his body was discovered about 9 p.m. between the Ward women’s dorm and the Fine Arts Center. That roughly fits my timeline.  A nurse at the Oxford hospital told the FBI that Guihard’s body arrived at approximately 10 p.m. “She stated that the (admission) card in her possession does not reflect the ‘exact time’ he was brought to the hospital and that the time is from her personal recollection.”  Guihard was DOA.
Ray Gunter’s body arrived at the same hospital at approximately 11:20 p.m. the nurse said.
Although it is impossible to know the precise time Gunter was killed, it is highly probable that he was killed in the earlier hours of the riot during the attack on the Lyceum by the stolen fire truck.  I suspect those who first assessed his condition knew that he was dead and did not rush to send him out by ambulance.
Most people on campus that night understood that the “news media” was considered an “adversary” of the university as well as the State of Mississippi.  However, around 4 p.m. my friend Jack and I “rescued’ a cameraman being slapped around by just yelling: “Let the man alone!”
Several years ago, the memorial plaque from the bench was stolen. Paul Guihard, a brave man and an aggressive professional journalist, was doing his job. Every time I visit Ole Miss I go by his  bench to pay my respects.
Dick Gentry was the Summer Editor of The Daily Mississippian prior to the 1962 riot at Ole Miss. He left Ole Miss shortly after and later graduated with a degree in journalism and business from Eastern Washington University in Spokane, where he was a writer for the Spokane Daily Chronicle. His career also includes editor and publisher of The Caymanian in The Cayman Islands; executive editor of Hawaii Business Magazine; editor of Atlanta Business Chronicle and executive editor of the Birmingham Business Journal. His first job after leaving Ole Miss was sports editor of the Artesia (N.M.) Daily press, where he eventually became editor. He lives in a small mountain town about 50 miles north of Atlanta with his wife and fellow traveler of 54 years, Martha. UNDER FIRE AT OLE MISS is his second book about a Mississippian’s unusual career. His first is AT THE FOOT OF THE SOUTHERN CROSS, the story of a naïve reporter who became editor and publisher of the only newspaper in The Cayman Islands during the rise of the offshore tax-haven industry. Both are available at Amazon.com.
Facebook
Twitter
Pinterest
Previous articleVIDEO>> NWCC Offers Great Bang for Your Buck
Next articleLocavores Love Oxford's Midtown Farmer's Market