On Cooking Southern: Pickles to Fry For

June 20, 2014
0
4034
By Laurie Triplette
ldtriplette@aol.com
Southernism of the Week:
Well fry me a fritter and call me done: Nonsensical expletive referring to a situation or occasion that’s beyond one’s control.
FRY ME A RIVER OF SWEET AND SOUR GOODNESS
Southerners never met a food we wouldn’t fry. At least that’s the perception held by the non-grit-eating world about our generic gastronomical tendencies here in God’s Country.
Of course, what the rest of the world doesn’t know about Southern cuisine could fill an encyclopedia… and has. Several times.
But perhaps those folks who are not from around here have a point. Southern cooks have been known to push the outer limits of frying in our cast iron skillets and Lord knows what other equipment we’ve Jimmy-rigged to hold and heat up a few gallons of oil. And we are justifiably recognized for our traditional love of lard and Crisco and bacon grease and butter and batter.
Let me tell you, desperation has always been the mother of invention. And nobody did invention like our hungry Southern ancestors stuck in the middle of nowhere, with no money, no refrigeration, excessive heat, and limited rations of salt for curing their meats. Both the early inhabitants and our ancestors who survived the 100 years following the War of Northern Aggression knew that breading any questionable food in lightly seasoned flour or cornmeal and dropping it into hot grease could produce a meal both delicious and safe.
As a result, we have become both infamous and secretly admired for our fried food. There’s the obvious Southern-fried cuisine: Chicken. Pork chops. Steak. Rabbit. Frog legs. Whole turkeys. Gators. Anything that breathes underwater. Just about any vegetable, including okra, tomatoes, squash, eggplant and corn. The grain family, including leftover grits and variably seasoned balls of cornmeal… think hushpuppies and fritters…
And then there’s the rest of the batter-fried universe we’ve only partially explored to date. Twinkies. Candy bars. Sticks of butter (those Texans always like to show off). Ice cream(?!?).
When done right, fried really is fabulous. You know the Southern motto (one of them, anyway): When it doubt, fry that sucker.
To that I attach John Wesley’s motto: Everything in moderation.
FRIED DILL PICKLES
Today we are going to explore the tart but tasty world of fried dill pickles, invented right here in our neck of the woods. I’ve had a hankering for them since the Collegiate World Series started. We’ll save the fried green tomatoes and fried squash fritters and fried okra for another day. Soon. I promise.
Fried pickles first appeared on the American culinary scene in the early 1960s. The first known printed fried pickle recipe was in the Oakland (CA) Tribune on November 19, 1962, for “French Fried Pickles.”  That recipe called for using sweet pickle slices and pancake mix. 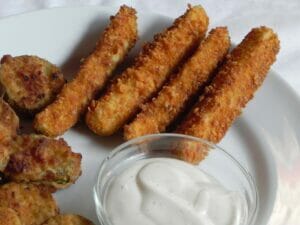 What some regions don’t know about frying could fill another encyclopedia…
By 1977, recipes for Fried Pickles were appearing across America. Pennsylvanians popularized a beer-batter coating, arguably the Philly answer to everything fried.
The precise origin of fried pickles may be murky, but in our region, it was inevitable that the fried DILL pickle would become a hit. After all, ours is a region where Delta high school students love to dip jumbo dill pickles in Kool-aid powder at the football games.
Fried dill pickles have been so popular in the Mid South since the early 1960s that ownership of the “dish” has become a source of contention between the states of Arkansas and Mississippi.
The Encyclopedia of Arkansas officially claims that fried dill pickles originated in the Natural State. Even Wikipedia states that fried dill pickles were first popularized by Bernell “Fatman” Austin between 1960 and 1963 at his Duchess Drive In located in Atkins, AR. The Duchess was located directly across the street from a pickle plant. Austin told interviewers until his death in 1999 that the fried pickle concept had been around for a while, but he got the idea of serving fried dills in his restaurant after staring at that pickle plant day after day.
He started off using jarred hamburger slices but concluded they were too salty. He switched to slicing jumbo fresh dill pickles lengthwise, and concocted a secret batter recipe. The new version, served up with ketchup and ranch dressing on the side, became the must-have snack for every Razorback and trucker passing by on I-40 until the closing of Fatman’s  last restaurant, the Loner, in 1978.
Fatman died in 1999, and he never shared his secret fried dill pickle recipe, even when Morton Frozen Foods (now ConAgra) came calling with fists full of money. But his family has kept the recipe alive ever since at the two-day annual Atkins PickleFest, where Fatman first teamed up with the local Masonic Lodge in 1963. Each year they sell about 10,000 slices at the festival. Proceeds from those festival sales go to fund charities and scholarships Austin had supported through the Masonic Lodge.
Mississippians also claim ownership of the fried dill pickle. Our Magnolia State historians say it originated with Tate Seldon at The Hollywood Café, which opened in 1969 in Hollywood, MS.  The original Hollywood Café building burned in 1983, so they relocated to a rustic 1926 farm commissary building in Robinson, just southeast of Tunica. The new location and really old building merely enhanced the folksy charm for diners seeking down-home gustatory goodness.
Seldon recalls that in 1970 he decided to fry up dill pickle chips at the café after a customer requested a fried pickle. Seldon developed a recipe that the café still uses — dredging crosscut dill pickle chips in an egg-and-milk wash and in flour blended with seasonings that include cayenne, chili powder, and salt.  The Hollywood’s deep-fried dill pickle chips, still made by some of the original staff, turn golden brown in about a minute and a half.
Check out the entertaining video featuring The Hollywood’s fried dill pickles.
Over the years, lovers of fried dill pickles have weighed in on their preferences pertaining to which type of pickles to use, how to slice them, whether to batter them or simply dredge them in seasoned flour, and what type of dip should accompany them.
So we have options for frying up our dill pickles as crosscut round slices (called chips) or sliced lengthwise, cut as spears, or sliced as oval chips on the diagonal. Everyone who fries them agrees the slices need to be about 1/4-inch thick. The accompanying dip is some version of ranch dressing, bleu-cheese dressing, Comeback Sauce, or Alabama White Sauce.
One thing everyone agrees on is that the best fried dills are regular dills, NOT Kosher dills. I’ve fried both types, and believe me, you’ll want to use regular dills.
MISSISSIPPI RESTAURANTS KNOWN TO FRY UP YUMMY PICKLES

JB’s on the Square, Holly Springs

The Blue and White, Tunica 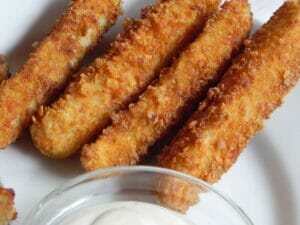 I have found that Vlasic’s Farmer’s Garden Dill chips work great, but spears cut from Regular Jumbo Dills look prettier. You may omit the cornflake crumbs from the chips. Also, when deep frying, do not set the heat above 360˚F, or the flour will tend to burn. This recipe makes enough dredge for 2 jars of the Farmer’s Garden Dills.

Mix egg, milk, and hot sauce in a medium bowl. Whisk together the 2 c flour, baking powder, salt and spices in a separate bowl. Place the crushed cornflakes in a third bowl.
Pat the cold pickle slices dry. Dredge in the flour mixture.
Briefly submerge pickles in the egg wash, being careful not to knock off the flour.
Dredge immediately in the flour mixture, making sure to coat completely.
Dredge the floured slices in the optional cornflakes and then again in the flour mixture.
Place on a wax paper-lined sheet in the freezer for 15-30 minutes. This makes the batter stay on the pickles.
Heat about 2 inches of peanut oil to 350-360˚F,  in a deep fryer. Drop semi-frozen, dredged slices into the hot oil, not touching. They will be done in less than 2 minutes. Remove, drain briefly on a paper towel and serve while still hot.
TWIN PALMS BISTRO FRIED PICKLES 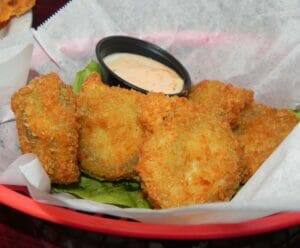 My brother, the Palm Springs restaurateur transplanted from Memphis, also got a hankering for fried pickles. His buddy Russell, whose significant other maintains Memphis and Olive Branch ties, created their version for the oh-so-chic California desert-rat community. Those fried pickles sell more booze at the restaurant than The Most Interesting Man in the World sells beer on television.
Re-Pickle the Jumbo Dill Pickles:

Layer the pickle slices, onions, cinnamon sticks and red pepper flakes in the original jumbo pickle jar.
Combine the sugar in vinegar and water in a medium saucepan, heating it just enough to dissolve the sugar. Pour the vinegar mixture over the layered pickles and onions. Cover tightly and refrigerate for 48 hours.
Make the flour dredge:

Whisk ingredients together in a mixing bowl.

Make the beer-and-egg batter and get to work:

Whisk beer batter ingredients together in a separate mixing bowl.
Fry the pickles:

Pull out and pat the pickles dry when read to fry them.  Have the flour dredge and beer batter already made up. Dredge the dried pickle chips in the dry flour mixture and dip in the beer batter to coat. Dredge the coated chips in the Panko crumbs and position, not touching, on a wax paper-lined baking sheet. Freeze completely.
When ready to fry the pickles, drop them frozen into hot deep-fryer oil.  The pickles will fry golden in 1-1/2 to 4 minutes, depending on your fryer. Scoop out and drain the pickles before serving.
Laurie Triplette is a writer, historian, and accredited appraiser of fine arts, dedicated to preserving Southern culture and foodways. Author of the award-winning community family cookbook GIMME SOME SUGAR, DARLIN’, and editor of ZEBRA TALES (Tailgating Recipes from the Ladies of the NFLRA), Triplette is a member of the Association of Food Journalists (AFJ),Southern Foodways Alliance (SFA)  and the Southern Food and Beverage Museum (SOFAB). Check out the GIMME SOME SUGAR, DARLIN’ web site: www.tripleheartpress.com and follow Laurie’s food adventures on Facebook and Twitter (@LaurieTriplette).