The Decline of Oxford Civilization 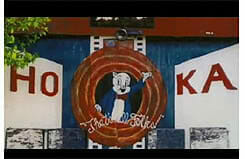 A kid in a trench coat, a dummy in a bedspread, and a night at the Hoka.