On Cooking Southern: Eye on Pie 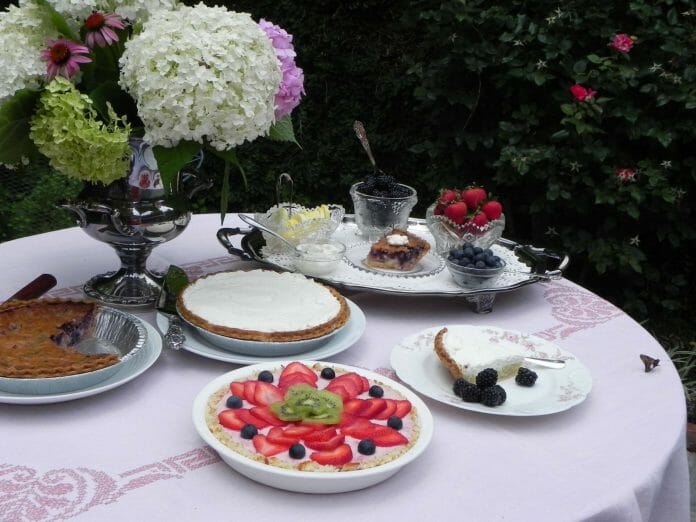 There you go: A common Southern expression of affirmation of the obvious, usually stated after conclusion of an event, or after revelation of circumstances that led to the event. For example, “There you go. All those Blue Dog Mississippi Democrats voted in the Republican primary runoff.”  Or “There you go. Vandy took the Collegiate Baseball World Series after trouncing our playoffs nemesis, Virginia.”

I’VE GOT MY EYE ON PIE

Those are the first words of a silly ditty sung by Andie McDowell in the feel-good movie about a frowsy angel named Michael played by John Travolta.

I like pie, too. Pie, after all, is the perfect food-combo platform. Think about it. You can wrap up just about any comestible in a bit of crust made of flour and fat and salt and an occasional smidge of sugar, and end up with a tasty treat. Fruits, cream, nuts, sugar and molasses, vegetables… savory meats…  They all taste better in a pie.

To quote Kat Kinsman, speaking on behalf of PIE in last fall’s Southern Foodways Alliance cake-versus-pie debate between Kinsman and Kim Severson, “Pie, no matter the baker or eater, is a gift… when it’s the height of the season and you want to embrace and honor the fruits of the season … pie is for affirmation … “

This week I’m featuring three pies that are easy (as pie) to make, and that use what’s currently in season. 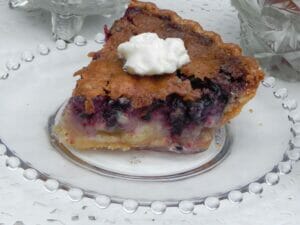 Take my grandmother’s classic buttermilk pie and add a couple of cups of blueberries for a delicious crossover.

Pour into an unbaked regular 9-inch pie shell — homemade or packaged work equally well. Bake at 350˚F in preheated oven until center is firm, from 30 minutes to 1 hour.  NOTE: This pie usually requires closer to an hour.  During last 15 minutes, if requiring an hour, to prevent crust from burning, loosely tent foil over the pie, not touching.

When center of pie is firm (toothpick comes out clean), remove to a rack to cool completely for several hours. Refrigerate before slicing so pie will be easier to slice without running. Top slices with vanilla ice cream or whipped cream. Refrigerate leftovers. 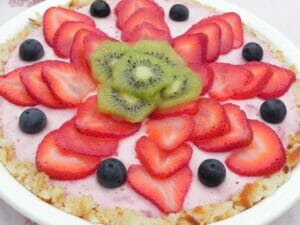 The crust for this pie is an old-fashioned cookie piecrust, made from coconut macaroons that are once again available in the grocery stores. The pie itself is a variation of the cherry cheesecake pie that was popular 30 years ago.

Crumble 16 macaroons and press into a 9-inch pie pan. Make sure the thickness is even on the bottom and up the sides. Repeat for second pie shell.

In a large mixing bowl, blend the cream cheese, milk, lemon juice and vanilla with mixer on low speed. Add the ricotta and the strawberries in sequence just to blend. Do not over-mix, or the filling will become too liquefied.

Pour the filling into the macaroon pie shells, loosely cover, and freeze until ready to serve.

A half hour before serving, remove pie(s) from freezer to thaw enough for slicing. Embellish top with sliced strawberries, blueberries and kiwi. Refrigerate any leftovers. 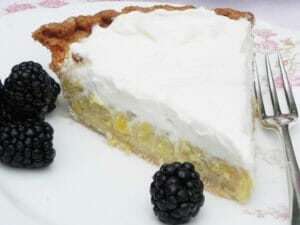 Sweet squash pie is all the rage in the Carolinas. It’s like a combination of summer AND autumn, and would work well as a Thanksgiving dessert. My family adapted this recipe from Tammy Grubb’s version printed last year in OUR STATE magazine.

Dash of cinnamon and/or dash of pumpkin pie spice

Combine all the ingredients in a food processor and puree finely — about 30 seconds to a minute Pour into pie shells, allowing room at top for whipped topping.

Bake in preheated oven at 350˚F for 45 to 50 minutes, until center quits jiggling.

Cool at least an hour to allow pie to set up before slicing. Cover entire top of pie with whipped cream or whipped topping. Serve with fresh blackberries.  Refrigerate leftovers.