On Cooking Southern: Grill Classics for the Fourth 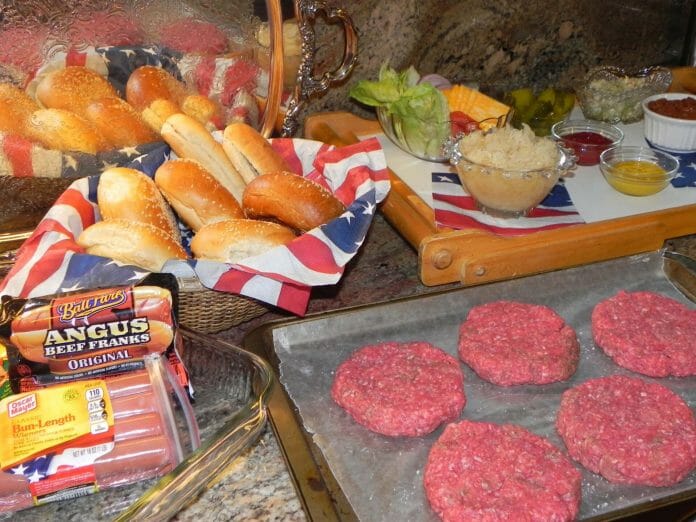 Take: A common verb used in the South for a wide range of activities, such as “I take the Oxford Eagle, the Commercial Appeal, and the Clarion Ledger.” This action of subscribing to something is not interchangeable with more personal and occasionally antagonistic action  such as “Take that job and shove it!”

BURGERS AND DOGS AND CORN ON THE COB — SIMPLE GRILL FOOD

Ok. Let’s face it. Along about now every household in America is about to fire up the grill … or has just finished doing so.

It’s summertime, for goodness sake. It’s hot and sticky outside, and nobody wants to heat up the house by cooking on the stove.

This week our food preferences are all about the burgers and frankfurters and fresh corn on the cob. What could be more American, especially during our Fourth of July celebrations?

Corn is one of the greatest of all American foods. It sometimes gets a bad rap. Did you know that most sweet corn is not genetically modified, unlike the field corn used for animal feed, ethanol and high-fructose corn syrup? An ear of sweet corn has about the same number of calories as an apple, and is lower in sugars. Moreover, corn’s antioxidant activity increases when the corn is cooked.

Burgers and dogs originated in Germany and started showing up as quick food sold by German-Americans on our streets during the late 19th century. Both foods were popularized at American expositions, especially at the 1904 St. Louis World’s Fair.

Burgers may be made from ground beef, lamb, pork, bison, venison, or turkey — or even from ground veggies such as eggplant. The dogs, well, sometimes the less we know, the better. 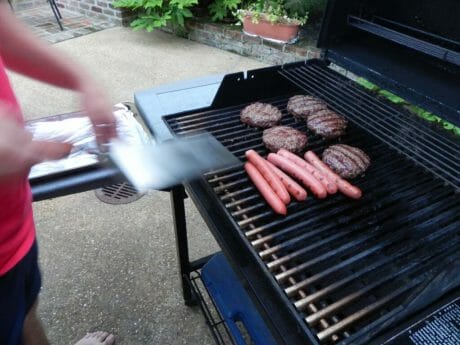 Technically, a frankfurter (hot dog) is a cooked sausage. Hot dogs labeled wieners contain pork, and occasionally now contain chicken and turkey trimmings and fat, along with flavorings such as salt, garlic and paprika. Hot dogs labeled franks tend to be all beef and contain stronger seasonings.

Most hot dogs come in natural casings like other sausages. Increasingly popular, though, are skinless dogs, processed in a technique developed around 1925 in Chicago, where hot dogs are a tradition.  Like some other sausages, hot dogs usually contain high levels of the preservatives sodium nitrite and erythorbate. But uncured dogs that do not contain nitrates and nitrites are becoming more prevalent for health-conscious consumers.

Hot dogs are pre-cooked, and in the good old days during The Old Bride’s 1950s childhood, folks would occasionally eat a dog right out of the package. Nowadays, that’s not a good idea. ALWAYS cook those dogs before eating them!

The dogs may be steamed, grilled, or boiled. Each region in America has its own preference. If boiling, it’s better to drop the dogs into the boiling water for a minute, turn off the heat, and cover the pot until ready to serve from the dirty dog water. When grilling skinless dogs, first cut a couple of small slits to prevent them from shriveling. Cased dogs won’t shrivel as much, but might burst. Some folks lightly steam the cased dogs before placing them on the grill to ramp up that char flavor.

And then there are the condiments and other toppings for those dogs — all regional. Mustard only. Ketchup. Onions. Sauerkraut. Sliced peppers. Pickle relish. Beanless chili con carne. Slaw. The cook method and condiments define each region. There’s Chicago-style, Detroit Coney Island style, Sonoran style, Seattle style, and New York style. And then there’s Southern style.

I’ll never forget the summer Hubby and I attended an international conference in Calgary, Alberta during the annual Stampede – which is always held during the first week in July. One afternoon, several of us from the Carolinas stopped in at the Dairy Queen located on Main Street downtown, and requested chili slaw dogs with mustard and onions. The DQ server expressed confusion because earlier that day about a dozen other customers had requested this style of dog, which is alien to Calgarians. We knew those customers, because they were the ones who had told us where to find the DQ. Those other slaw-dog customers hailed from Georgia, Mississippi, Kentucky and Tennessee. 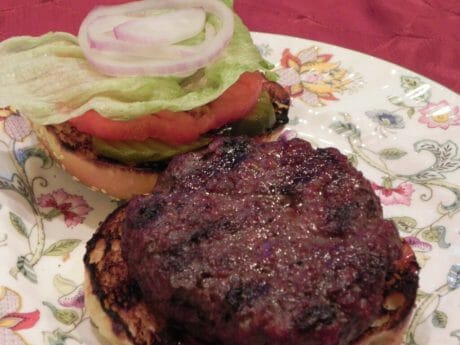 Follow these 6 rules, and you’ll always have great burgers.

When it comes to burgers, more is more – meaning more fat content in the meat makes for better burgers. Ground chuck or 85% lean ground beef results in the juiciest burgers because of the higher fat content. If grinding your own beef, combine chuck and sirloin to create a stronger beef flavor while retaining fat.

Allow about 6-8 ounces of ground meat per burger.

It’s okay to work in a few spices such as pepper, garlic powder and Worcestershire Sauce. But don’t add salt until just before grilling, and only sprinkle kosher salt on the surface. Why? Salt draws out the moisture and also breaks down the protein of the meat.

Don’t over-work the ground meat when working in spices and forming the patties. Too much handling breaks down the protein in the meat, resulting in dense, less juicy, and less flavorful burgers.

If prepping early and refrigerating the raw burgers, remove them from the fridge about 15 minutes before grilling to bring them back up to room temperature.

Never press down on the burgers during cooking. It forces out the juices. Just make sure to form the patties as flat as possible to begin with, because the meat will swell during cooking.

Grilled Corn on the Cob 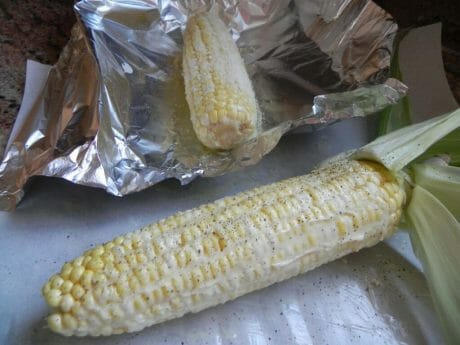 Select plump ears whose tips have filled out. There are three methods for grilling corn on the cob: Still in the husks, husks peeled back, or husks totally removed.

Husks-on, intact: If grilling intact, remove loose outermost husks, but leave intact those that are tight. Soak the corn in its husks for about 15 minutes. Place on a grill preheated to about 400˚F and close the grill cover. Turn the corn about every 5 minutes for about 15-20 minutes, until outline of the kernels begins to appear through the husks. Remove from grill wearing oven mitts, and cut off the husks at the base. The silks and husks should fall away from the corn. Serve with herbed butter.

Husks-on, silks removed: To grill with husks on but peeled back, also remove loose outer husks and soak the corn for about 10-15 minutes. Carefully peel back the husks and remove the silks. You may butter and season the corn at this stage if desired. Pull the husks back over the seasoned corn and tie the ends together with kitchen twine. As with the other husks-on method, place corn on grill set at about 400˚F  and turn every 5 minutes until done, about 15-20 minutes.

Husks removed, in foil packets: If choosing to grill the corn with husks removed, peel back and remove as much of the silk as possible by hand. Carefully scrub away any remaining silks caught between rows of kernels by using a paper towel or soft vegetable brush, using a downward motion from tip to base. Pat the corn dry. Trim the knobby protrusion remaining at the base of the cob.  Place each ear of corn on a rectangular sheet of aluminum foil. Drizzle with somewhat cooled melted butter and season with optional spices or grated Parmesan cheese. Tent the foil over the corn and twist the ends closed. Place each foil packet on the top rack of the grill for about 20-25 minutes, with lid closed. Carefully open foil packets (steam will escape) and serve.