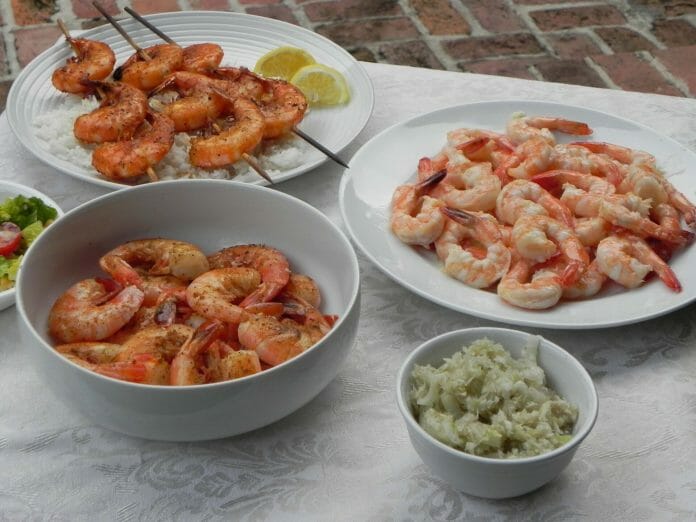 Happy as a tick on a lazy dog: Exactly what it sounds like, this expression refers to being satisfied with being in the right place at the right time… for as long as you want to be there! Interchangeable with “Happy as a clam in sand at high tide” or “Happy as a pig in slop.”

SHRIMP BOATS ARE A’COMIN’, EVEN UP HERE IN THE NORTH

I love what our dedicated farmers can lovingly coax to grow in our dirt this time of year … luscious tomatoes …watermelons … fresh corn … squash … peas and beans … peaches ….

But there’s seawater salt in my veins as well. So whenever the daily temperature climbs above 90, I start flashing back to annual childhood trips to the beach. In my family’s circle of acquaintances, it never mattered that the north Delta and north Mississippi are at least 5 hours from the Gulf of Mexico. Hah. That’s a mere car ride between locations for most Southerners, who love our mountains and our beaches, and think nothing of traveling at least 4 hours to either one.

As a result, most of us landlocked folks have developed a taste for oysters and crab and clams and shrimp. In fact, apart from crawfish, perhaps nothing is appealing to us as fresh-caught shrimp and crab. Thanks to modern refrigeration, flash-freeze techniques, and willing purveyors willing to trek between us landlubbers and the coast, we can enjoy marine bounty year round. And during the summer months, we expect to consume large quantities of fresh caught shrimp.

Shrimp come in all sizes. Some varieties are better for boiling, and some are better for using in recipes calling for delicate or distinctive shrimp flavor. All shrimp are rich in omega-3 fatty acid, which may reduce heart disease, and are low in carbohydrates and fat. Shrimp are an excellent source of high quality protein, and reproduce rapidly, which makes them a sustainable food source.

Our current Gulf Coast shrimp season launched on June 18 at Gulfport-Biloxi, when 368 shrimp trawlers hit the waters. Statistics from the Mississippi Department of Marine Resources indicate this was the largest turnout since 2005.

Rick Burns, director of the Shrimp and Crab Bureau, says that the current season is a good one, so far. Heavy spring rains and a cold winter led to a later season opening (when the shrimp count per pound reached 68 count). June hauls in the mid-Mississippi Gulf have averaged 300 pounds per trawl of 38-40 count brown shrimp.

The pink shrimp, also known as spotted shrimp, have a mild sweet flavor and firm flesh, and are easy to peel, which makes them tops for baking. The pink shrimp aren’t so shrimp-y in size — they can grow up to 11 inches long.

The white shrimp have a mild, sweet flavor, and their shells also are easy to peel. All three varieties are available year round, but the browns peak between May and September.

Fresh-caught shrimp are wonderful, as long as they haven’t started to turn. You’ll know by the ammonia smell if those shrimp need burying instead of breading.

When using frozen shrimp, be sure to defrost it first, to prevent uneven results when sautéing or boiling. NEVER thaw frozen shrimp on the counter or in the microwave unless you want to make yourself sick. The best way to defrost the shrimp is in a bowl under cold running water. This method takes mere minutes.

Preparation of shrimp for cooking depends on the cook method. Generally, shrimp is deveined and the shells removed before cooking. The “vein” running along the length of the shrimp’s back is the shrimp’s digestive system. Although not bad to consume, the shrimp might be tastier without the vein. It is easier to remove before cooking. Either way, to devein before or after cooking, run a sharp paring knife along the vein line and catch the vein with the knife tip or a small fork to lift it out.

Do not discard shrimp heads and shells. Bag and freeze the heads and shells and boil them later to develop shrimp stock.  Or sauté them in butter and use the shrimp-flavored butter as a condiment.

We never ever want to see that “O” shape.

Everybody likes shrimp boiled, or breaded and fried. But shrimp also is fabulous when poached, steamed, sautéed, broiled, or grilled. Here are several recipes that will expand your shrimp-cooking arsenal, including a recipe for making your own shrimp-boil spice bundle.

Several Southern seafood cooks swear that the very best way to cook fresh shrimp is to poach it rather than dropping it into boiling water. Rule of thumb: Use 4-6 cups of water per pound of shrimp. Try it for yourself. I’ll stick to the steam or boil methods.

Place the shrimp into stockpot. Add water to cover by 2 inches an add seasonings. Bring the pot up to a boil on medium heat (about 5 minutes). Stir once or twice, gently. As soon as the first shrimp floats, remove pot from the heat, drain immediately, and shock it with ice to stop the cooking.

The easiest way to boil shrimp is to use Old Bay seasoning with lemons, vinegar, salt, pepper, cayenne pepper, Bay leaf, and sometimes with beer. The old-fashioned way is to combine spices into a bag and make your own seasoning. NEVER NEVER NEVER leave your boiled shrimp in the hot water, unless you LIKE to eat rubber.

Place the 12 spices in the center of the doubled cheesecloth. Bring all corners up to and tie tightly into a hobo bundle with kitchen twine.

1 lemon, cut in half

Bring 4 to 5 quarts of water to a boil. Add salt, lemon halves, onion flakes, and shrimp-spice hobo bundle. Return to a boil and cook for 2 to 3 minutes. Drop raw shrimp into the boiling water and return to a boil. As soon as it reaches a boil again the shrimp should be done — pink and floating.

Drain immediately and shock the shrimp in ice-cold water to stop the cooking; cover with ice. Serve immediately hot, or chill and serve cold. YIELD:  8 to 10 servings. 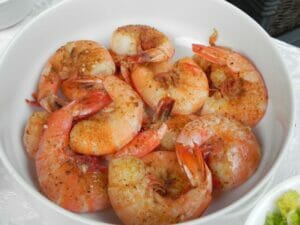 This method is a good one for folks who like their shrimp spicy. Think crawfish, only with shrimp.

Fresh lemons, cut in half

As soon as the water reaches a boil, insert the filled basket. Cover tightly and steam for about 4 minutes per pound. You’ll know when it’s done because the shrimp will turn pink and curl into that lovely “C” shape. Turn off the heat and leave covered for another minute or two, but do not over-steam. Serve immediately. 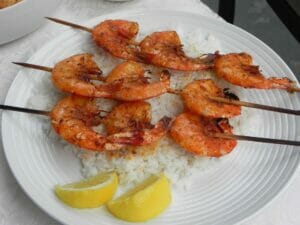 Depending on the size and type of shrimp, it may be grilled with or without the shell. Some types of shrimp are difficult to peel when grilled with shells on, so do your shrimp homework before hitting the barbie, or experiment first with one shrimp. Seasoning is a personal choice, and can include barbecue dry rub. But here’s a hint: Ever since The Old Bride’s family started ordering the grilled catfish at Taylor Grocery, we’ve been hooked on their house brand of all-purpose seasoning.

Large (16-20 count) shrimp, shells on or off (depending on the shrimp)

Taylor Grocery All Purpose Seasoning or seasoning of choice

Select only firm, large shrimp for this. Slip about three onto each skewer, piercing from bottom to top through the thickest section. Drizzle with olive oil and liberally sprinkle with spice seasoning.

Before cooking, sauté minced garlic in butter and shrimp shells or heads (for flavor. Remove the shrimp bits and set aside.

Bring charcoal or gas grill up to about 400˚F, or turn oven onto broiler heat. Place the skewered shrimp directly on the grill, close, and turn once after about 4-6 minutes, or whenever bottom side has turned pink. If broiling in the oven, place skewered shrimp on a broiler pan and broil about 3 minutes per side.  Remove from heat and drizzle with the garlic shrimp butter. Serve immediately. 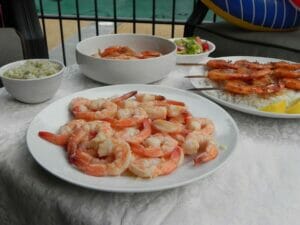 Melt butter on medium heat in skillet. Add garlic and stir about a minute. Drop in the shrimp and position so that each shrimp is completely touching the pan. Use spoon or spatula to douse each shrimp with the hot garlic butter. Flip it over after about 2-3 minutes when the bottom side has turned pink and repeat dousing process. Allow to simmer about 2 minutes until bottom side is done. Remove shrimp from the pan, add white wine and pinch of cayenne and stir gently until liquid reduces slightly, about 2 minutes. Use this as sauce over the shrimp if adding the shrimp to angel hair pasta or fettucini.