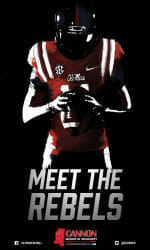 As preseason camp begins for Ole Miss’ fall sports, fans should make their plans for “Meet The Rebels Day” Presented By Cannon Motors set for Saturday, August 16 at the Manning Center on campus.
Doors will open to Rebel Kids’ Club Members (with up to two parents or guardians) at 11:30 a.m., at the south entrance of the facility, which faces the Track & Field complex. The general public may enter atnoon, and all fans should park in the Coliseum lot.
To enroll a child in the Rebel Kids’ Club, visit www.RebelKidsClub.com.
As the Manning Center opens, the Rebel soccer, volleyball, rifle, women’s golf and spirit squads will be greeting fans and signing autographs. Chick-fil-A will be providing concessions, and the Rebel Shop will be selling apparel, media guides and other merchandise.
Football coaches and players will be signing autographs and visiting with fans from 12:30 until 2:30 p.m., when the event comes to a close. In order to quicken the lines and accommodate as many people as possible, fans are limited to one autograph item per individual, and photos with football coaches and players will not be permitted.
New team posters will be handed out to fans, and a kids zone will be set up with inflatables and other games.
SuperTalk Mississippi, which will air locally on 93.7 and 105.5 FM, will broadcast live from the stage beginning at noon with an on-air team led by the “Voice of the Rebels” David Kellum.
Several Ole Miss coaches and administrators will be interviewed, beginning with Head Football Coach Hugh Freeze at 12:15 p.m. Athletics Director Ross Bjork is also among the many guests.
Fans tweeting about their “Meet The Rebels Day” experience should use the hashtag #MeetTheRebels.
Another preseason date of note, football practice will be open to the public, weather permitting, onSaturday, August 9 at 9:45 a.m., in Vaught-Hemingway Stadium.  Follow Ole Miss Football throughout preseason camp on Twitter (@OleMissFB) and Facebook (Facebook.com/OleMissFootball), in addition to www.OleMissSports.com.
–Ole Miss Sports Information