How Willie Morris Learned to Love His Cat 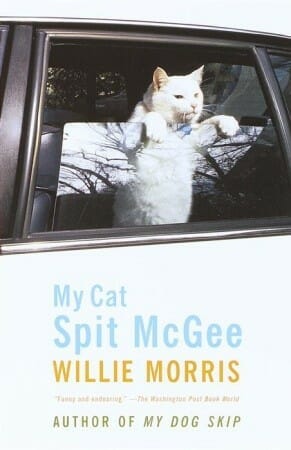 My husband has a favorite quote he loves to spout after seeing a cat’s eyes glow unworldly. “Who has not seen Satan in their sly faces?”
The quote is from “True Grit” by Charles Portis and describes how his main character, Mattie Ross, distrusts cats when compared to the innocence of ponies.
Please, do not get me wrong. My husband loves cats. It wasn’t an overnight change, though. It took time before he learned the benefits. Our first cat, Lucy, was also his first attempt at getting to know the smarter pet. The discerning pet that picks its owners very carefully, our Lucy was slow to love but loyal to the core.
Hubby thought it incredible that I could get Lucy to play fetch with a bread twister or hide-n-seek in the monkey grass. She came when she was called and greeted us when we came home. She even flicked her tail when excited, reminding us of a dog’s wag. Yet, when her eyes shifted, Bam! He would utter it without even knowing, “Who has not seen Satan in their sly faces?”
Willie Morris was the same way. He grew up with all manners of dogs and loved them with delight, but he was about to marry a cat lover! He didn’t just dislike cats, he loathed them. How in the world would he be able to function with a cat in the house?
The dreaded day happened on what was supposed to be a joyous and calm Christmas. The cat came from under the tree with a little red bow around its neck. A gift from his grown son David to Willie’s new bride, the kitten was found cold and starving on the side of Highway 51 in the Delta. I picture Willie lifting his feet off the floor in disgust.
She was named Rivers Applewhite after one of Morris’ childhood friends who is also featured in his book, “My Dog Skip.” He was allowed to name her since he was obviously left out of the gift giving loop and his bride was smitten.
Rivers grew to be a smart cat, but she was no dog. She did not play fetch. She did not come when called. Instead, she took to hiding. Once she was found nestled between “The Brothers Karamazov” and “Down and Out in London and Paris.”


Willie was also unable to get her affections. “When I picked her up, she would not stay with me. Why could she not at least show even the most modest indications that she was happy to see me and to greet me when I was gone for several days? This puzzled and angered me. ‘Cats ain’t dogs,’ I would shout accusingly at the Cat Woman.”
Rivers soon gave birth to a cat that forever changed Willie’s mind about pets. “My Cat Spit McGee” is a mature look at a man’s struggle to accept the cold, hard fact that he was becoming a dreaded cat lover.
Doug Larson had this to say about the regal manner of felines: “The cat could very well be man’s best friend but would never stoop to admitting it.”