September 9, 2014
9
413
The Overby Center for Southern Journalism and Politics will kick off the first home football weekend of the season at Ole Miss with a special program recognizing the success earlier this year of the school’s baseball team. 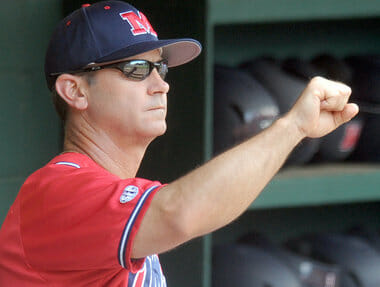 Coach Mike Bianco will lead a delegation of coaches and players to talk about their championship season and their trip to the College World Series and to discuss prospects for next year in a program at the Overby Center at 5 p.m. on Friday. The event is free, the public is invited, and arrangements are being made to make parking available in the lot next to the center for the hour-long program.
Though Ole Miss baseball has a long record of success, Bianco has taken it to greater heights since he took charge of the program in 2001. His teams have won 557 games in 14 years, advanced to NCAA playoffs in all but two of those seasons and went on to compete in five super regionals before winning a spot in this year’s College World Series. To accommodate growing crowds, the university renovated its baseball park a few years ago, added several thousand seats and turned it into one of the top college baseball venues in the country.
Bianco will be joined by Coach Carl Lafferty and two outstanding players from the 2014 team who are returning next season: first baseman Sykes Orvis, who led the team with 14 home runs, and left-handed pitcher Christian Trent, who wound up with a 9-0 record and an ERA of 2.05.
Keith Kessinger, analyst for Rebel baseball broadcasts, will serve as moderator.
“With so many alumni and fans in town for the football game, we thought it would be an entertaining change of pace to have a program dealing with our most successful baseball team in years,” said Overby Fellow Curtis Wilkie.
The 2014 baseball Rebels finished with a 48-21 record and led the Western Division of the Southeastern Conference. In post-season, they went on to claim an NCAA regional in Oxford without a loss and defeated University of Louisiana-Lafayette in a super regional on their way to Omaha, where they advanced to the semi-finals. Ironically, ULL will be the football Rebels competition on campus here Saturday.
Courtesy of the Overby Center
Facebook
Twitter
Pinterest
Previous articleOle Miss Announces 2013 Fan Experience Findings
Next articleOle Miss Grad, Author, Releases Debut Novel About Mississippi