Can You Guess where 2 New Residential Halls will be Constructed?

With the continual influx of more freshmen and students to the University of Mississippi, another construction project broke ground on campus Sept. 8 where two new residential halls are being built. 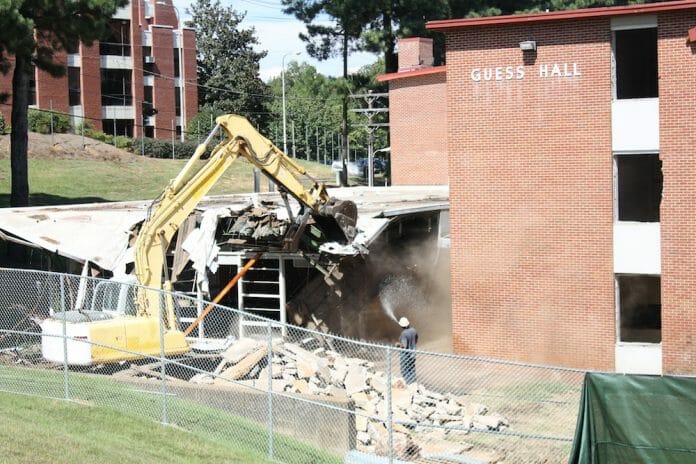 These new halls, soon to replace Guess Hall directly behind the Ridges and Minor halls, will include 624 dorm rooms that feature in-room bathrooms, study rooms, lounges as well as an outside courtyard.
The rapid increase in Ole Miss enrollment is the cause of the new construction. Vice Chancellor of Student Affairs Dr. Brandi Hephner LaBanc said, “Our goal is to create more opportunities for students to live on campus. We want to accommodate not only first year students but second, third, and forth year students as well.”
University of Mississippi student Shelby Lewandoski comments, “I think that since the enrollment rate is rising so quickly that it [the new construction] is necessary for the university.”
When asked about the issue of on campus parking Lewandoski said, “as much as we hate parking garages, they would be an asset to our campus and helpful to everyone on campus and off.”
University housing officials released a rough sketch of the projected $40 million project, which is expected to be completed summer 2016 and will be available to house students that fall.

Molly Brosier is a HottyToddy.com staff reporter and can be reached at mebrosie@go.olemiss.edu.