Two Dominating Defenses Battle on the Gridiron in Oxford

October 1, 2014
0
481
The No. 11 Ole Miss Rebels welcome into Oxford the No. 3 Alabama Crimson Tide to Oxford this weekend for an SEC Western division tilt and the most anticipated game of the week in college football.
In this game, fans will witness two dominating teams — and especially defenses — battle it out on the gridiron of Vaught-Hemingway Stadium on Saturday afternoon on CBS at 2:30 p.m. CST. 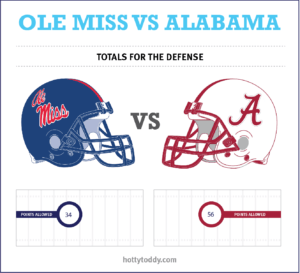 Coach Hugh Freeze has the Rebels excelling on both sides of the ball, but the true testament to the Ole Miss football team is the stellar play of the Landshark defense. In the first four games of the season, the unwavering defense has only given up 34 total points to their opponents, and the first string defense has not surrendered a touchdown to their opposition all season.
During the Memphis game last Saturday, the Rebels held the Tigers to only 104 yards of total offense in the 24-3 win. After the game, Ole Miss linebacker Cody Prewitt talked about how the team is readying themselves for the Tide this weekend.
“We are going to prepare for them like we do everybody else,” Prewitt said. “They are coming into our house so we are not going to be intimidated. They are going to be the ones climbing up the hill.”

Last season, the Rebel defense had a few holes due to players out with injuries, but now junior C.J. Johnson is back with his triumphant return on the defense and is a real third down pass rushing threat to the opposition and junior Mike Hilton was out for part of the season with a hamstring injury. Alabama’s offense is ran by senior Blake Sims who has thrown for 1,091 yards and eight touchdowns this season. A year ago, the Crimson Tide was led on offense by gunslinger A.J. McCarron.
The Tide defense has only allowed their opponents to rush for a total of 248 yards in the first four games of the season, while their secondary has allowed 753 yards through the air. 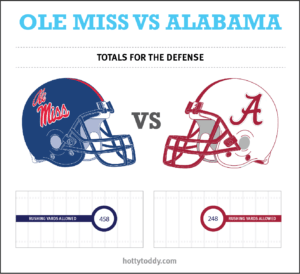 Teams against Alabama are averaging only 14 points through four games that ranks them ninth in the nation in points allowed, but the Rebels are averaging only 8.5 points and almost no touchdowns.
The Tide defense is led in tackles this season by Landon Collins who has a total of 32 this season, and the Rebels are led by graduate linebacker D.T. Shackelford with 23 tackles and Hilton follows right behind with 22.
With both teams highly skilled on both sides of the ball including two healthy senior quarterbacks, it should make for an interesting afternoon at the Vaught. At the end of the game, it will likely come down to the skill and team with the most determination to finish it out.
Adam Brown is HottyToddy.com sports editor and can be reached at adam.brown@hottytoddy.com. Amelia Camurati is managing editor and can be reached at amelia.camurati@hottytoddy.com.
Facebook
Twitter
Pinterest
Previous articleBjork: Get LOUD, Rebel Nation!
Next articleCollege Football Hall of Fame to Honor Wesley Walls Saturday