During one of the most competitive times to access funding from one of the nation’s largest research sponsors, the University of Mississippi Medical Center has received more awards and more money than the previous year.
The National Institutes of Health, the primary federal agency for biomedical and health-related research, has been forced to become more selective in distributing its awards over the last few years, a product of cost-cutting among government agencies.
But in that same time, UMMC has managed to pull in more funding for its extensive research projects, nearly $42 million this fiscal year, a feat placing the university among the top 10 in the nation for increased percentage of NIH funding. During the last fiscal year, NIH-funded projects at UMMC stood at $23.1 million.
“We are very proud that our NIH funding is on the rise. It gives us incredible prestige and credibility in the academic community to have that source of funding, and we are going to look forward to doing that further every year,” said Dr. Richard Summers, associate vice chancellor for research at UMMC. “It’s a real challenge because it’s a pretty hard and competitive point right now.”
Overall, UMMC received more than $52.1 million this year for research from multiple funding sources, representing an 83 percent increase in research funding from last year.
“This success comes from the hard work of the individual researchers at our institution,” said Summers. 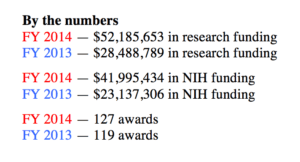 Researchers such as Dr. John Hall, chair of the department of physiology and biophysics and the lead investigator in UMMC’s Mississippi Center for Obesity Research, continue to draw in NIH funding because of the magnitude and potential global impact of his studies.
“We were fortunate to receive two major NIH grants this past year,” said Hall, citing an $11.4 million and a $10.3 million grant, both over a five-year period that will continue his team’s research into obesity and cardiovascular and kidney diseases.
The second grant comes from the National Heart, Lung and Blood Institute, a component of NIH, and is a continuation of a program project grant for cardiovascular studies that has been funded at UMMC for 45 years, said Hall.
Dr. Thomas Mosley, a UMMC professor of geriatrics and lead researcher at the MIND Center, has pulled in funding from many sources thanks to his research into Alzheimer’s disease.
“We’ve been successful and lucky in some ways. We’ve certainly worked hard and we’ve tried to be very strategic about the institutes where we seek funding,” said Mosley. “Specifically, we try to closely match the institute’s priorities.”
Mosley said because cohort-studies like his are expensive to run, it’s become increasingly important to cultivate buy-in from multiple institutes within NIH.
“So instead of going to just one institute and saying we need a whole lot of support to get this study done, we look for ways to work across institutes and get multiple partners involved,” said Mosley.
The tightening of the purse strings at NIH also has prompted the MIND Center to identify alternative funding sources, said Denise Lafferty, chief of operations at the center.
“The compound effect comes into play, and one result impacts the other; the NIH funding helped us to get state funding and the state funding and private support can help us get more NIH funding,” said Lafferty.
During 2013, Mississippi allocated $3 million to the MIND Center, marking the first time for state funding at the center, she said.
The federal and private funding – for which the MIND Center has raised more than $10 million – encouraged state leaders to pay attention, Lafferty said.
The funding from the state and private entities is helping pay for infrastructure projects, which also is critical in gaining NIH funding, said Lafferty. “If you don’t have the staff and equipment to be able to prove you can really deliver the results of the grant, then they are less likely to give you the funding.”
Even as the future of research funding means finding alternative strategies to obtain it, UMMC and its researchers remain committed to the cause, said Summers.
“It’s always important to remember that the point of the research mission is not to get grants,” said Summers. “That’s very important as the fuel for funding the research mission, but the point of the research mission is the discovery itself and the discovery in the context of helping the health care of Mississippians. That’s the real main goal.
“As long as we have our eyes on the prize of discovery and improving the health care of Mississippians, that’s really what we want to do.”