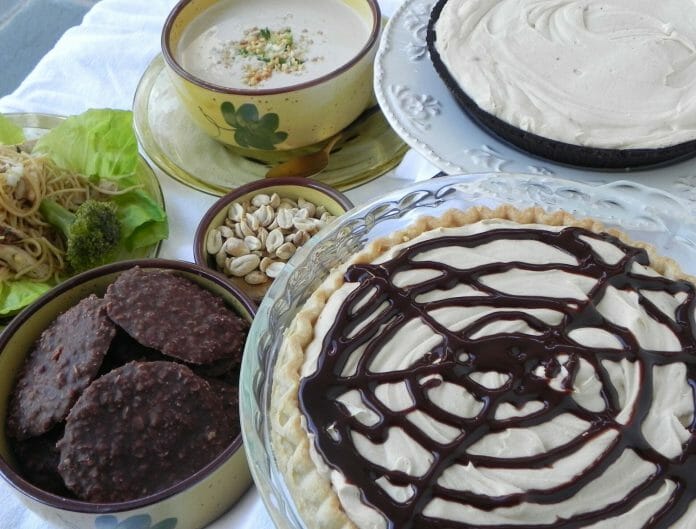 Southernism of the Week:
Charm the dew off a honeysuckle: Refers to someone who can be awfully charming. Like Bo Wallace and Friends on a great roll… Be afraid, SEC opponents. Be very afraid. They can charm the dew off any honeysuckle.
Goober peas are a staple of the South that spread nationwide for good reason. They’re yummy. Otherwise known as peanuts, these legumes that grow underground are a significant contributor to nourishment in countries around the globe.
Peanuts originated in South America, possibly Bolivia, Paraguay, Brazil or Peru. By 1500 BCE, the Incans were grinding peanuts into a form of peanut butter, and using peanuts as sacrificial offerings. Tribes in central Brazil were brewing beverages from ground peanuts and maize. When the Spaniards conquered the New World, peanuts were being grown as far north as Mexico.
Along with many other New World plants, the Conquistadors took peanuts back to Europe, Africa and the Far East, where they became an integral crop as early as the 17th century ACE. As did many other plants, peanuts came full circle, traveling to Virginia and the East Coast with Africans in the 18th century. “Goober”, the 19th century Southern slang word for peanut, actually came from “nguba”, the Congo language name for peanut.
Peanuts were grown in the South primarily for their oils and for processing as a cocoa substitute. As a food, peanuts were considered livestock fodder until the dark days of the Civil War, when both the Union and Confederate troops subsisted on them. After the war, the Yankees took them back north and the lowly peanut gained in popularity as a street snack. Circus entrepreneur P.T. Barnum offered hot roasted peanuts for sale during performances, and by 1900 commercial manufacturing equipment made it easier to cultivate, harvest, and process peanuts.
Cereal King Dr. John Harvey Kellogg invented an American version of peanut butter in 1895 in his ongoing quest to develop better nutrition for Americans.
At about the same time, George Washington Carver became director of the agriculture department at Tuskegee Normal and Industrial School in Alabama. Like the rest of the South, Alabama was experiencing hard times due to widespread cotton crop failure caused by the boll weevil. During the early 1900s, Dr. Carver conducted extensive research into the agricultural and chemical properties of peanuts and peanut oils, resins, gums, and sugars. His discoveries and breakthroughs changed Southern agriculture and are considered to have salvaged entire populations.
Peanut butter was introduced to the general American public at the 1904 St. Louis World’s Fair. Containing more protein than any other nut, peanuts and peanut butter were an essential part of rations for troops during World War I and World War II.
The U.S. is the third largest peanut producer today, behind China and India, which grow most of their crops for use within their own borders. Peanuts are the 12th largest crop grown in the U.S. The Southern states grow 99 percent of all the U.S. peanut crop.
So how many peanuts does it take to make a 12-ounce jar of peanut butter? About 540 ”runner” peanuts. The National Peanut Board also states that peanuts contributed more than $4 billion to the American economy last year, the average peanut farm is 100 acres, and women tend to prefer creamy while men tend to prefer crunchy peanut butter.
Scientists have postulated that allergic reactions to peanut products are the result of two significant factors: (1) roasting the peanuts, which enhances the major peanut allergen Ara h2; and (2) allergic individuals’ lack of early exposure to peanuts and germs in general.
Makes me glad I grew up surrounded by peanut butter lovers. At least that’s one allergy off my list.
PEANUT SOUP 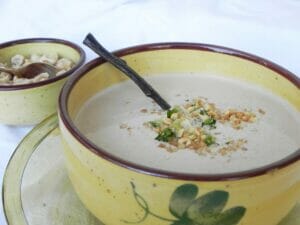 Peanut soup has been popular in the South for 400 years, originating in Virginia. It’s easy to make and easy to freeze (before adding the cream). The quality of the chicken stock makes a huge difference — homemade stock has more intense flavor than store-bought stock.

Sauté onion and celery in butter until soft, but not browned. Stir in flour until well blended. Add chicken stock, stirring constantly, and bring to a boil.
Remove from heat and rub through a sieve or puree with an immersion hand blender. Add peanut butter and cream, stirring to blend thoroughly. Return to low heat, but do not boil.
Serve garnished with crushed peanuts, chopped green onion and parsley. This also is good served cold. Yields 8-10 servings.
NOODLE STIR FRY WITH PEANUT SAUCE 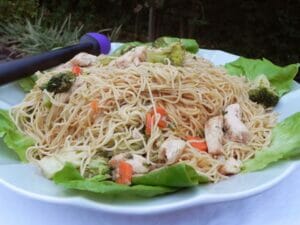 Peanut Sauce has been used in Asian cuisine for a long time. Some versions such as Thai Noodles with Peanut Sauce contain more heat. Other versions feature classic Asian seasonings such as ginger. Feel free to experiment. Be sparing with the sesame oil, though, because a little goes a long way, and too much overpowers all other flavors.
Peanut Sauce 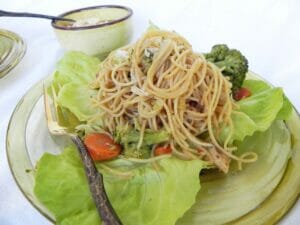 Combine all sauce ingredients in a small non-reactive bowl and whisk until completely blended. Set aside at room temperature.
Place broccoli crowns in double boiler that fits into a medium saucepan. Fill saucepan two-thirds full of water. Salt the water. Bring to a boil and position the double boiler over the pan; cover with lid. Cook for about 1-2 minutes, until the broccoli crowns turn bright green. Immediately remove the double boiler and drop the pasta into the broccoli water. Cook according to directions and drain.
While pasta is boiling, heat oil in large stir-fry skillet  (rounded sides) or wok. Add onions, carrots, parsley and lemon zest to the hot oil and sweat them until they begin to soften. Add the chicken strips and stir to blend and heat the chicken. As soon as pasta is cooked, add the broccoli and the pasta. Toss to mix and scrape all of the peanut sauce over the mixture. Toss until completely coated and evenly heated.
Serve immediately as a stand-alone dish, or in butter lettuce leaves. Also may be eaten cold.  Yields 8-10 servings.
VARIATION: Add bell pepper strips and sliced shiitake mushrooms.
CHOCOLATE NO-BAKE COOKIES 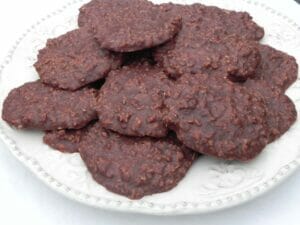 Good breakfast food – oatmeal and peanut butter!! NOTE: Don’t cook the chocolate even a minute too long or it will either burn or set up as fudge too quickly to mound the cookies without them crumbling. 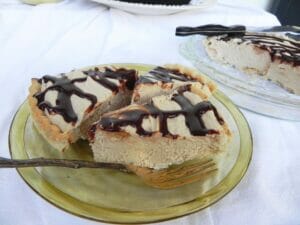 PEANUT BUTTER PIE
This has to be one of the most decadent concoctions ever made. I checked, and a single slice (8 slices to a pie) tops out way above 400 calories (as high as 600+ if topped with more whipped cream, nuts and chocolate). But oh, is it great — tastes like a frozen Snickers Bar. Low fat versions of everything may be substituted, including frozen whipped topping for the whipped cream. I prefer a regular crust to the graham cracker version. NOTE: Packaged chocolate wafer piecrust is smaller than standard piecrusts; reduce the peanut butter and brown sugar quantities from 3/4 cup each to 2/3 cup each.

Chocolate sauce such as Hershey’s Syrup

Place mixing bowl and beaters in freezer to chill. Preheat oven to 350˚F.  Lightly brush beaten egg white over entire inside surface of piecrust.  Bake the piecrust according to directions. Remove to rack to cool.
Pour cream into the chilled bowl. Add the confectioner’s sugar. Whip the cream into stiff peaks. Cover with foil and place in fridge.
Beat the cream cheese, peanut butter, brown sugar and vanilla extract until completely blended and fluffy. Fold in the whipped cream until mixed. Spoon into cooled piecrust. Smooth out the top.
If using chocolate piecrust, invert the plastic covering over the pie to cover. Otherwise, cover or wrap pie, with top not touching the cover. Freeze for several hours or overnight.
When ready to serve, decorate top with chocolate sauce, and other embellishments such as chopped nuts, crumbled cookies, or caramel. Slice the pie before it completely thaws to ensure clean cuts. Yields 8 generous servings or 16 sensible servings.
Laurie Triplette is a writer, historian, and accredited appraiser of fine arts, dedicated to preserving Southern culture and foodways. Author of the award-winning community family cookbook GIMME SOME SUGAR, DARLIN’, and editor of ZEBRA TALES (Tailgating Recipes from the Ladies of the NFLRA), Triplette is a member of the Association of Food Journalists (AFJ),Southern Foodways Alliance (SFA)  and the Southern Food and Beverage Museum (SOFAB). Check out the GIMME SOME SUGAR, DARLIN’ web site and follow Laurie’s food adventures on Facebook and Twitter (@LaurieTriplette).
[box style=”0″]

PEANUT BUTTER OFFERS MORE THAN FLAVOR FOR THE SAVVY

I’ve developed a taste for peanut butter as I’ve aged. I didn’t care for it as a child… it always seemed too sticky, too sweet, too pea-nutty, perhaps.

On the other hand, my mother and baby brother, and later, my husband and daughter, could live on the concoction. My daughter admits that for a time she did.

It was nothing unusual to view any one of them wandering the house with a tablespoon coated in a glob of peanut butter, like a giant sucker. One of my fondest memories is of baby brother as a toddler, scuttling along with a peanut butter-and-jelly sandwich in one hand, blanket in the other, while Midnight, our pet rabbit, hopped behind him, stealing nibbles from the sandwich.

And then there was the night Hubby invented the Tostito-and-peanut butter-as-dip concoction for lack of salsa or cheese. Desperation truly is the root of all creation.

That’s why I shouldn’t have been surprised over the years to learn of the many non-culinary uses for peanut butter. I am ashamed to admit it took an early-morning call to my pediatrician to learn that peanut butter would remove great gobs of bubble gum from my daughter’s face and long, long, long hair … How guilty did I feel after already having spent an hour vigorously scrubbing the poor child’s affected parts with ice cubes? … Pretty guilty …  and she keeps reminding me.

Here is my Top 10 List of Best Alternative Uses for Creamy Peanut Butter. George Washington Carver would be proud.