H2O Oriental Café: Still Spicy after All These Years

October 21, 2014
1
1158
Southern cuisine is something known to everyone who has visited Oxford. The Square is well regarded for its delicious food and welcoming atmosphere, but the town also has a very wide variety of international foods as well.

Among them is H20 Oriental Café, located in what many Ole Miss alums and former residents may know as “the old Pizza Den” spot on University, across from Sonic.
It’s owned and operated by Van Tran and Tri Che, a husband and wife duo who have been in business since 1989. They came to the United States after the Vietnam War, and Van says they were the last on the boat to leave Vietnam in 1975. The ambitious immigrants came to Oxford in 1979 to visit family and decided to make it their home.
“The people are so nice and friendly that’s why we came to the community” says Van. And the people have responded favorably to the menu. 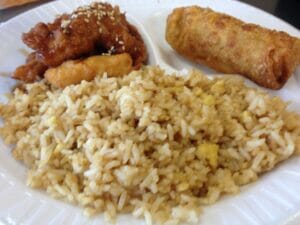 The Bangkok chicken is a rich dish with flavors of vinegar, cinnamon, and dried chilis. “A lot of the younger crowd orders Bangkok chicken,” says Van. But the most ordered dish is sesame chicken. Van says the older crowd tends to lean toward Phao Soup, the ingredients of which include of rice noodle, bean sprout, cabbage, cilantro, jalapeño, lime, veggies, and a choice of meat.
Tri says she took many cooking classes in school in Vietnam, but due to the war, her credits did not transfer to the United States. After 10 years of being in food service, Van came to the realization that she wanted to own and operate her own restaurant. She and her husband opened H20 in the Oxford Mall in 1989. Since then, they have moved times, but their location on University Avenue is where they hope to stay.
Oxford resident and regular H20 customer Tom Hinton has been a fan since 1989 and says he eats there three to four times a week. Over the years, Van and Hinton have developed a friendly relationship. Hinton has tried everything on the menu and even some things that are not on the menu; in fact, he says he hasn’t made a formal order since 2005.
“I normally just walk in, and whatever Tri thinks I want to eat, she just brings it to me,” Hinton says.
Ashleigh Culpepper is a student in the Meek School of Journalism & New Media at Ole Miss
Facebook
Twitter
Pinterest
Previous articleOle Miss Students Have New Way to Go Home for Holidays
Next articleRebel Spirit on the March With a Musical Twist