October 23, 2014
2
646
“I’ve been singing in my room since I was born,” said Kate Teague as a deep blush spread across her cheeks as she leaned back in her chair. “So yeah, I guess it’s not something I chose to do — it just happened.”
As Kate walked into the Starbucks nestled in the J.D. Williams Library on the Ole Miss campus, she looked comfortable in Nike shorts and a big t-shirt, nothing out of the ordinary for a girl at this school. You might never guess that she bears a soulful, passionate voice that is guaranteed to leave you with goosebumps. 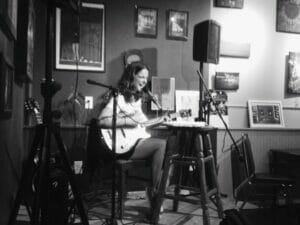 It was no exaggeration when Kate said she’s been singing since birth. Her dad and biggest supporter, Chris Teague, recalls her singing and dancing at an early age for any audience she could find — even when the “audience” was simply her reflection in a mirror and the singing was “more Barney than Coldplay.”
“Well, as a parent you see sparks of passion in your children even before they realize they have it. Kate has always loved music and dance. Literally. Always,” he stressed.
In seventh grade, Kate’s mom enrolled her in a studio started by Brandy Brown, a former singer on the Mickey Mouse Club and part of the original Broadway cast of Les Miserables. She remembers realizing then how much she truly enjoyed singing and being onstage. And, that she was pretty great at it.
It wasn’t until her junior year in high school that Kate began to take her talent more seriously. She had already started writing her own music and covering songs on YouTube when she enrolled in voice lessons. The lessons were not to become a classically trained singer, she noted, but to help her with technique so that when she sang her own music she could incorporate those skills.
Kate went on to win scholarships two years in a row at the Bayfest Music Festival, a major event in her hometown of Mobile, Alabama.
“And that’s what got me my big, huge Yamaha keyboard that I still use, and my mics,” Kate explained as she played an air piano.
Fast forward four years. Kate is now a senior at Ole Miss with a minor in vocal performance. She has spent the last two summers interning in the “Music City,” Nashville, Tennessee. Back in Oxford to finish her last year, Kate is already plugged in and ready to dive head first into her music. 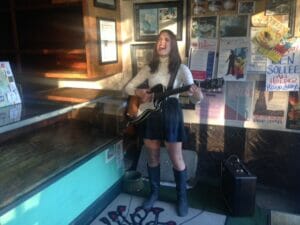 “This school year I’ve made a lot of connections I never even thought I would make with a lot of musicians around town,” she said.
A handful of these new friends filled the audience at her most recent gig at the local coffee shop, Cups. After her performance, which she humbly labeled as “so not a big deal,” she was approached about recording a demo this week with the help of a few other local musicians.
Tim Burkhead, an Ole Miss alum and a member of the local band Bella Machine, remembers seeing a picture of Kate performing at Cups and could tell that she was singing something important. He didn’t hear her voice, however, until he was sent of video of that performance.
“She sings like everything she ever told you was a lie; such a true feeling that comes from her songs,” gushed Burkhead.
Her voice is raspy, yet smooth, steady, but adventurous, and usually accompanied by a guitar that she taught herself how to play. Considering all of those factors, in addition to most of her songs being inspired by what she deems “being stupid,” (or what some call just being a typical college student) you would have to try, and probably fail, not to feel some type of emotion.
“There seems to be a theme, yeah.” A smirk sets in across her face, “It seems to be learning from myself, and it’s how I talk myself through bad mistakes like a sort of therapy.”
Kate has five songs planned for her demo, most of which she came up with organically, often writing them on her way to class. Once the demo is produced she plans on handing them out to local restaurants in hopes of booking more performances, but more shows aren’t the only thing Kate is hoping to put together in the future.
“If I could have it any way in a year I would have a solid band, a solid ten songs at least,” Kate drums her fingers in emphasis, “And just being able to play here regularly.”
F 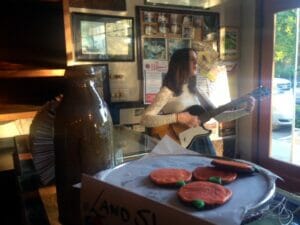 or now the routine for Kate is continuing to schedule shows at Cups as often as she can. She is also singing for the college mass at St. John’s Catholic Church every Sunday, an outlet which allows her to take the pressure off of her music and share her gift no strings attached. It is safe to say Kate’s music has hit a high note that is not only promising, but has her more excited than ever.
“Now that this is happening, if it all pans out like it seems like it’s about to- cause I have a lot of people on my side, which is great, I’ve never had that before,” Kate says, twiling her foot excitedly as she continues, “I have a feeling I’ll be in Oxford another year trying to start it off, now that it seems more than ever like I have so many people cheering me on.”
Kate will once again perform at 7 p.m. Sunday at Cups and fill the small coffee shop on Jackson Avenue with her raspy voice.
Samantha Rippon is a HottyToddy.com contributor and can be reached at srrippon@go.olemiss.edu.
Facebook
Twitter
Pinterest
Previous articleOxford Daily Crime Report for Wednesday, Oct. 22
Next articleFour Guys on a Mission in the Name of College Football