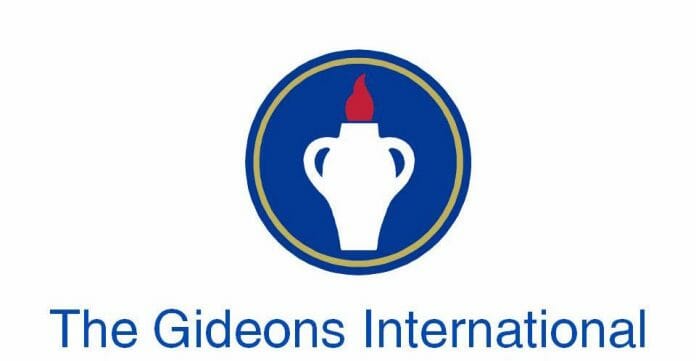 The Gideon International organization passed out free New Testament Bibles outside of the student union at the University of Mississippi last month as part of the organization’s free Bible campaign.
According to Dr. Micah Everett, a Lafayette County member of the Gideon International Organization for nine years, the Gideon’s meet with the Office of the Dean of Students at the University of Mississippi every year to discuss handing out New Testament Bibles on campus. The Oxford camp, the local group of Gideon members, meet once a week for prayer and once a month for a business meeting. Each member pays their dues, which provides the cost for the administrative part of the non-profit organization. At the University of Mississippi, Gideon members are allowed to stand on the outside of the student union and hand out New Testament Bibles to any students who want one each year in the fall semester.
“This year about 3,000 Bibles were handed out on the Ole Miss campus,” Everett said. 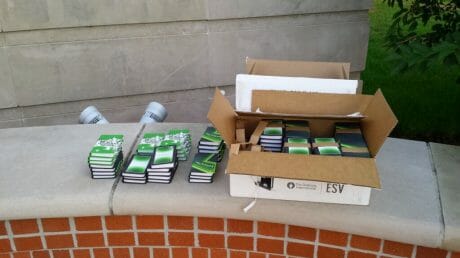 Everett, an assistant professor of music at the University of Mississippi, never gets involved in handing out the Bibles on the University of Mississippi campus.
“As a professor, I have never participated in the on campus distributions because I don’t want there to be a perceived conflict of interest,” Everett said.
Everett’s grandfather and father are members of the Gideon International Organization, which makes him a third generation Gideon. The members are not ministers, they are the lay persons of churches. New members are invited by the organization to join, and they can be active members.
“This organization allows you to be an active member even as far as going to one of the 197 countries the organization has offices in and helping out there,” Everett said.
David Hargett, a member of the Gideon organization for over 32 years in Tallahatchie County, said that the Gideon International Organization was founded in 1898 by two traveling businessmen named John H. Nicholson and Samuel E. Hill. The two business men, already Christians, met while staying at the same hotel when they were traveling through Minnesota and decided that they would like to see a Bible in every hotel in America.
“The founders were always traveling and they thought that since so much traffic comes through hotels and motels that it would be nice to have Bibles for those people to read while they stay,” Hargett said.
Nicholson and Hill held their first Gideon meeting in July of 1899 and added a third member, William K. Knight. According to Hargett, over 100 years later the Gideon International Organization has added over 300,000 Gideon members and auxillary members (the wives of the Gideon members), and over 1.9 billion free Bibles have been given out.
“Every Bible we give out is free, and they are free because 90 percent of the organization receives money from churches to purchase Bibles,” Hargett said. “Churches all over the world invite the Gideons’ to speak to their congregation and at the end they can take up an offering to send to the Gideons’ to purchase more Bibles.”
According to Everett, the every member is required to pay dues and the dues help with the administrative part of the organization, but there are other ways the Gideon members raise money too such as the memorial card. The memorial card is used when someone passes away, people can donate money to but Bibles in the deceased name.
“Our international offices are in Nashville, and there are some costs to running that,” Webb said, “but our member dues cover that part so donations can fully go to purchasing Bibles to give out.” 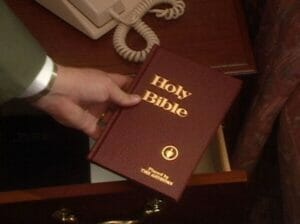 Bill Webb, 91, a retired and respected school teacher and city judge of Selmar, Tennessee, has been a Gideon member for 30 years. Webb and his wife, Tommye, live in Tupelo and are still members and supporters of the Gideon International Organization. The organization places free Bibles in more places than hotels and public and private schools. Webb has helped place Bibles in prisons, doctor offices, hospitals, and military bases. According to Webb, Bibles in the hotels get warn out from so many travelers using them, so the organization reuses those Bibles in prisons.
“We have a jail ministry and it would be surprising how many people’s lives are saved while they are in jail,” Webb said. “They have nothing else to do while they are in jail, so some of the prisoners will read the Bibles and get interested and get saved.”
According to the Gideon International Organization, New Testament Bibles are handed out in schools to students when they are in the fifth grade.
“We give out the Bibles to fifth graders because at that time in life they are able to read well and understand what they read,” Hargett said. “Some schools do not allow us on school property.”
According to Webb and Hargett, sometimes when a school does not allow the Gideon members to pass out Bibles on school property they will stand on a sidewalk on the other side of the street. When the children get out of school, the Gideon members are there to hand out Bibles if the children decide to walk over and get one.
“When we go to schools and colleges sometimes the Bibles are thrown back at us or spit on, but we don’t respond to that,” Webb said. “I’ve given out over 1,000 Bibles in my life, and I will give anyone a Bible.”
Emily Newton is a HottyToddy.com staff reporter and can be reached at esnewto@go.olemiss.edu.