The University of Mississippi will celebrate those who have served our country with a monthlong celebration throughout November. 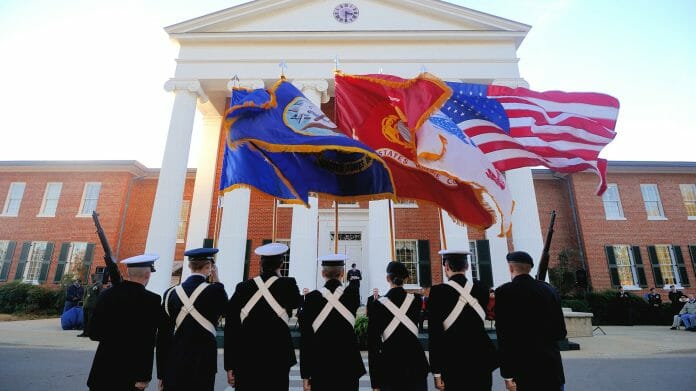 Cadets from four military branches participated in flag football games Nov. 8 before the Ole Miss football game against Presbyterian College. Cadets and veterans were also honored at halftime during the game, and a World War II veteran fired the cannon during halftime.
The Chancellor’s Review will take place at 2 p.m. today in front of the Lyceum in honor of Veterans Day. Here, the chancellor will have a chance to walk around with the ROTC commander and speak to cadets.
On Friday, Nov. 14, the Jazz Ambassadors, the official touring band of the United States Army, will visit the Gertrude C. Ford Center for the Performing Arts. Formed in 1969, this 19-member ensemble has received international acclaim and has performed with the San Diego Symphony Orchestra, the Seattle Symphony Pops, the Colorado Pops Orchestra and the New York Pops at Carnegie Hall, among others.
The month’s activities will conclude with the Egg Bowl Run on Nov. 24. During the run, cadets from both Ole Miss and Mississippi State make the 47-mile run from Starkville to Oxford in two separate legs. Cadets exchange the game ball in Calhoun City during a short ceremony. The event is expected to begin at 5 a.m. and conclude about 9 p.m.
The game ball will be on display in the Student Union following the Egg Bowl Run. On Saturday, Master Sgt. Matt Hayes, UM senior military professor, and the cadets will walk in front of the team through the Walk of Champions carrying the ball. A website is being created for those who wish to purchase the game ball. All proceeds go to the Ole Miss ROTC fund.
“It is very important for everyone who attends Ole Miss, lives in Oxford to take a minute and thank a soldier or a cadet,” Hayes said. “November should be a time to honor our military, veterans and future leaders.”
For more information about Military Appreciation Month activities, contact Veteran and Military Services at 662-915-5021 or at umveterans@olemiss.edu.