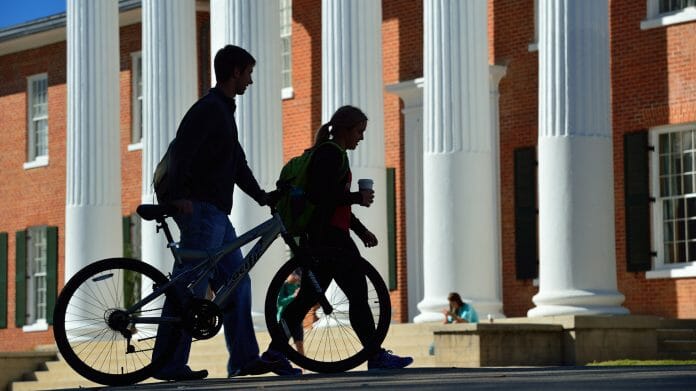 University of Mississippi officials have set a goal of doubling international student enrollment in five years, and officials from the UM Office of Global Engagement recently ventured into India and China to recruit freshman students from high-performing secondary schools.
Greet Provoost, director of the Office of International Programs, traveled with Jean Robinson, the office’s assistant director, to Hyderabad, India, where UM sponsored the Oakridge International School’s Model United National Conference, or OAKMUN. The conference brought together global-minded students from 30 schools around India and South Asia. Provoost also traveled to Nanjing, China, for the Jiangsu Star Student Search and met with prospective students to get the word out about UM.
“We are increasing awareness that we are on top of our game here at the University of Mississippi,” Provoost said. “We are letting prospective students and their parents know about our excellent academics, our incredible scholarship program, our safe and beautiful campus, and about the opportunities available to them as part of our campuswide focus on internationalization.”
University officials want to double international enrollment, which is nearly 1,000 students from 92 countries. To reach that goal, the Office of Global Engagement is partnering with schools, universities and media, as well as government and private agencies in target recruitment countries, with the goal of promoting the UM brand and its reputation for academic excellence.
At the suggestion of Univariety, a private enterprise commissioned by more than 300 Indian high schools, including Oakridge International School, to aid in college-abroad counseling, UM sponsored OAKMUN, which brought together more than 600 students and advisers from many of those schools.
Some of the strong selling points at OAKMUN were UM’s Sally McDonnell Barksdale Honors College, Croft Institute for International Studies and the university’s strong bachelor’s degree programs. Efforts to get attention from international students were helped by the Manning name and the movie “The Blind Side,” to which students often referred when talking with Provoost. Video clips and pictures prompted prospective students to say UM’s campus looked as nice as a resort.
“Having the University of Mississippi on board with us at OAKMUN 2014 was a wonderful experience, mutually beneficial, and added significant value to the conference,” said Mohseena Hussain, activity coordinator for Oakridge International School.
Her colleague agrees.
“It is clear that Oakridge International School and the University of Mississippi share a common objective – that is to impact students across the globe,” said Biju Baby, Oakridge vice principal for international curriculum. “We look so very forward to our continued association with the University of Mississippi through OAKMUN and any other opportunities which may arise.”
In the meantime, plans are being made for Provoost to be present via remote media at Oakridge’s upcoming parent meetings to further discuss opportunities at UM.
Some of UM’s international freshman students come from countries such as Brazil, Oman and Saudi Arabia, whose governments offer generous scholarship funds and tuition grants for their studies in the U.S. Self-funded high-performing students may be awarded UM’s academic excellence scholarships.
“We’re always looking for good students and we’re always happy if they’re funded,” Provoost said. “It balances the scholarships we give to others. But in the end, we are looking to make sure every UM student graduates having had global exposure.”
While UM has its reasons for helping international students study on campus, students have their own motivations for studying in the U.S. and at UM.
For many years, India has produced a large number of graduate students to attend American universities. That holds true at UM, too, as the vast majority of its students from India are enrolled in master’s or doctoral programs. As India develops, the competition for an undergraduate seat in one of India’s top-tier universities is fierce, so many Indian high school graduates seek a first-rate undergraduate education in the United States instead.
“Now, it’s either the best in India, or it’s the best abroad,” Provoost said. “Students want to get into top-notch American schools.”
In China, UM participated in the Jiangsu Star Student Search scholarship contest, presented by IntroAmerica in collaboration with the Jiangsu Education Association. The contest engaged 300 high schools in Jiangsu province. More than 9,000 essays were submitted and pared down to 625 by judges in China and the U.S. The finalists were invited to meet with officials from American universities about enrollment and scholarship opportunities.
Efforts to recruit international students will continue in China, India and other target countries by the various offices that make up the Office of Global Engagement: Office of International Programs, Study Abroad Office and the Intensive English Program.
“The experience of bringing people from all over the world to study at UM benefits all of our students as they prepare to step into a global economy,” Provoost said. “They will collaborate with, lead and manage, or be led or managed by people with different values, who may be fluent in other languages and view the world through a different lens. It is a privilege and an opportunity for all students to be able to practice those global skills while still in school. This global astuteness is a prereq to success.”
Courtesy of Ole Miss News Desk