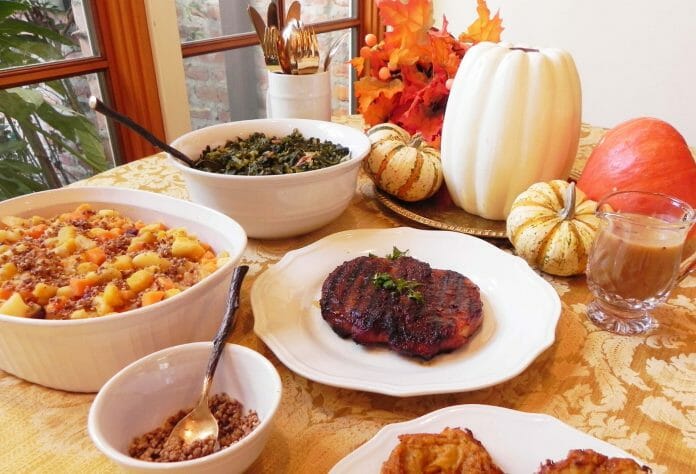 Southernism of the Week:
About as useless (or useful)  as a rubber crutch: Whatever it is, that thing won’t even hold up a gnat.
Fall is in full form and Thanksgiving fast approaches. During this annual period of giving thanks for our many blessings, I recommend everyone think about past Thanksgivings and focus on how to make this year’s even more memorable in a good way.
I am grateful that I have enjoyed a lifetime of wonderful, diverse Thanksgiving festivities with family and friends — some of them huge gatherings, others small and intimate. Some gatherings with prayers uplifted for loved ones in distress or serving in war. Others spent in service to the less fortunate, and still others devoted to football, our nation’s favorite Thanksgiving pastime.
One of my family’s most memorable Thanksgivings was the year Hubby was scheduled to officiate at the San Francisco 49ers game on Thanksgiving weekend. It was the first time our children ever spent a holiday away from extended family. However, having spent several consecutive Thanksgivings without Father at the Turkey Day gatherings, the children were ready to break with tradition.
It must be noted that NFL referees’ families generally do not travel to games because, after all, the officials are working and need to keep their heads in The Zone. But once in a while a game falls on a holiday in a fabulous city, and the officials’ families clamor to ride along, supposedly to be together during the holiday.
San Francisco is universally acknowledged as a great American city. Thus, the entire NFL officiating crew convened that year in San Francisco on Thanksgiving Wednesday with families in tow. We’d all already mapped out our holiday weekend itineraries for shopping, dining and entertainment, except for the all-important Thanksgiving Day meal.
On Thanksgiving morning, my daughter, the budding track star, joined the NFL umpire in jogging across the Golden Gate Bridge so they could say they did it. Most of us spent the day sightseeing. When it came time for Thanksgiving dinner, we had a discussion. Despite Hubby’s strong recommendation that we all dine at the famed Tommy Toy Chinese Restaurant, the crowd opted instead to partake of the Marriott’s  “Traditional Thanksgiving Buffet.”
Until that night, I never knew that people not from around here have different opinions of what constitutes “traditional” when it comes to Thanksgiving side dishes such as “Southern style” candied sweet potato casserole. That’s the night I realized that even sweet potatoes could be screwed up. REALLY screwed up.
What did we learn from that experience? We learned the truth of the expression, “When in Rome…” It’s been the source of much laughter among our family and NFL friends ever since.
This year’s holiday weekend promises new memories, as our home team anticipates facing off on the football field against a highly ranked team, which just happens to be our annual Thanksgiving Egg Bowl rival from down south.  This mama, frankly, is relieved the conflict is scheduled for the weekend and not on Turkey Day itself, so the Pride of the South Marching Band members in our circle may attend the Triplette family feast.
The clock is ticking. But there’s still time to make up some Thanksgiving dishes ahead in order to have more free time for enjoying the day itself. That is why this week’s Autumnal Sunday Supper menu includes several dishes that freeze well and that would complement the Thanksgiving table.
FALL FRUIT & VEGGIE SAUTÉ 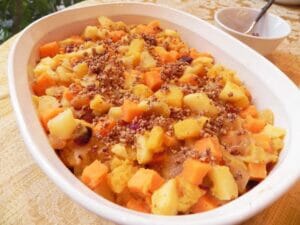 This dish was a happy accident that occurred when I commingled two recipes after several interruptions. It had started off as a fall squash interpretation of the traditional Jewish Tsimmes made with carrots, sweet potatoes and fruit. The happy accident took the dish into Bubba-land when I added the apples and pears to onions sautéed in bacon drippings. What the hey, I thought. I’ll add some wine and make the sweet more savory. … Turned out so fine that I plan to serve this dish at Thanksgiving.

Preheat oven to 400˚F. Cut the acorn squash in half. Spray cut sides with nonstick cooking spray. Pierce potato with knife to allow steam to escape.  Place potato and acorn squash in a 9-by-13-inch baking dish, cut-sides up. Loosely cover with foil. Bake until fork-tender (45 minutes to 1 hour). Peel potato and slice flesh from acorn squash rind. Cut potato and squash into 3/4– to 1-inch cubes.
While potato and squash are baking, peel, core and chop the apples and pears into 3/4– to 1-inch cubes. Toss with fruit fresh to prevent browning. Set aside.
Heat bacon drippings in a large skillet. Add the onion and sauté until translucent. Add the apples and pears; toss gently, sauté until softened. Mix in the potato and squash cubes.  Add white wine, craisins, salt and pepper.
Whisk Apple Caramel Glaze to blend. Drizzle over the fruit-veggie mixture and mix well. Simmer about 10-15 minutes, tossing gently, until liquid reduces and thickens. Ladle mixture into a large casserole dish. Top with chopped, roasted pecans.
Freezes well. Reheat, covered, in oven set on 325˚F.
APPLE-GLAZED BUTTERFLY PORK CHOPS 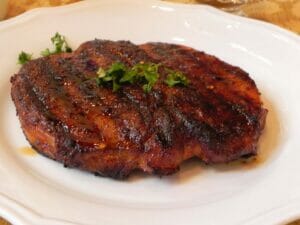 This recipe is well worth planning ahead. The chops need to age in the rub before grilling. Ideally, they should be grilled outdoors, but I grilled mine on a well seasoned cast-iron stove-top grill, using a heavy lid from a larger skillet to cover the grill skillet. The burner on my gas stove was set to medium-high.

Well in advance of prepping the meal, combine pepper, salt, garlic powder and paprika in a small bowl. Brush pork chops with olive oil. Generously dust both sides of chop with the dry rub. Cover and chill in fridge overnight or at least 12 hours. Remove from fridge 30 minutes before cooking.
To make up the bourbon glaze, heat the Apple Caramel Glaze just long enough to blend the butter and liquids, which will have separated during refrigeration. Whisk well to blend before measuring out 1 cup of glaze. Combine with Dijon, red pepper flakes and booze, whisking vigorously until completely blended. The mustard acts as an emulsifier and thickener.
Preheat grill to 350˚F. Brush grill with olive oil. Grill chops, covered, 6-8 minutes on first side.  Uncover and drizzle with glaze. Flip the chops and drizzle again with glaze.  Grill uncovered for 2 minutes, then close cover and cook for 4 additional minutes.  Allow longer time (about a minute more) if chops are thick. Internal meat temperature should read 185˚F.
Remove from grill and drizzle with a small amount of glaze. Llow the meat to rest for about 5-8 minutes before serving.
BRAISED COLLARDS 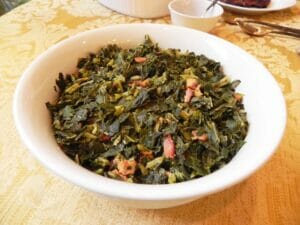 Collards cooked alone can be bitter and a bit tough. This is a veggie that requires thorough cooking to tenderize the greens. Old-fashioned Southern cooks used to add a pinch of sugar with the cider vinegar to neutralize any bitter taste. We’ve omitted the sugar.

Juice and zest of one lemon

Cook bacon in large skillet on medium-high heat until crisp. Remove the bacon  to drain on paper towels but leave grease in the pan. Combine the red pepper flakes, garlic and lemon zest in the bacon drippings and sauté for about 2 minutes. Add the collards and cook, tossing with tongs until the collards have wilted.
Add chicken stock, cover, and lower heat to medium-low. Simmer, covered, 30-40 minutes. Uncover and add the crisp bacon and cider vinegar. Raise heat to medium-high and reduce liquid for about 2-4 minutes. Add lemon juice, salt and pepper and serve. Freezes well.
BAKED SQUASH FRITTERS 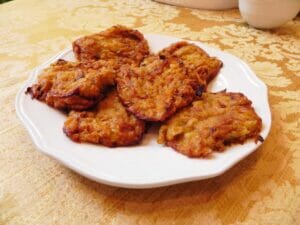 The usual approach to making fritters is to fry those babies. The process is quick and tasty, but less healthful than other cooking methods. I experimented with several recipes for baking the fritters and came up with this variation. The zucchini requires a lot of squeezing to remove excess. Even so, I had to reform the fritters after flipping them because of the wetness. Next time, I will experiment with rolling the fritter balls in crushed panko or corn flakes before flattening them on the baking pan.

Squeeze excess liquid from the grated squash and zucchini. Set aside.
Preheat oven to 375˚F. Line a large cookie sheet with parchment paper. Spray with nonstick cooking spray.
Melt the butter in microwave-safe cup or bowl at 30-second intervals until melted (about 1 minute total). Use a whisk or fork and beat the egg into the melted butter, working quickly to avoid clumps of egg cooking. Beat in the seasonings.
Measure the flour into a large mixing bowl and add the egg and butter mixture, stirring until completely mixed.  Add the grated veggies and toss to combine completely. Mixture will be loose and soggy.
Scoop a half-cup measure of mixture and squeeze out excess moisture, forming a ball. Position fritters on the cookie sheet, pressing lightly to flatten. Repeat until six patties have been positioned on sheet. Bake for about 25 minutes. Remove tray from oven. Carefully flip the patties, using two spatulas to prevent breakage. Push excess liquid on tray back into edges of each patty. Bake for 15-20 more minutes, until browned.
Remove from oven and allow to set up for 10 minutes before gently removing from pan to serving dish.
Laurie Triplette is a writer, historian, and accredited appraiser of fine arts, dedicated to preserving Southern culture and foodways. Author of the award-winning community family cookbook GIMME SOME SUGAR, DARLIN’, and editor of ZEBRA TALES (Tailgating Recipes from the Ladies of the NFLRA), Triplette is a member of the Association of Food Journalists (AFJ),Southern Foodways Alliance (SFA)  and the Southern Food and Beverage Museum (SOFAB). Check out the GIMME SOME SUGAR, DARLIN’ web site and follow Laurie’s food adventures on Facebook and Twitter (@LaurieTriplette).