On Cooking Southern: Chicken and Dumplings 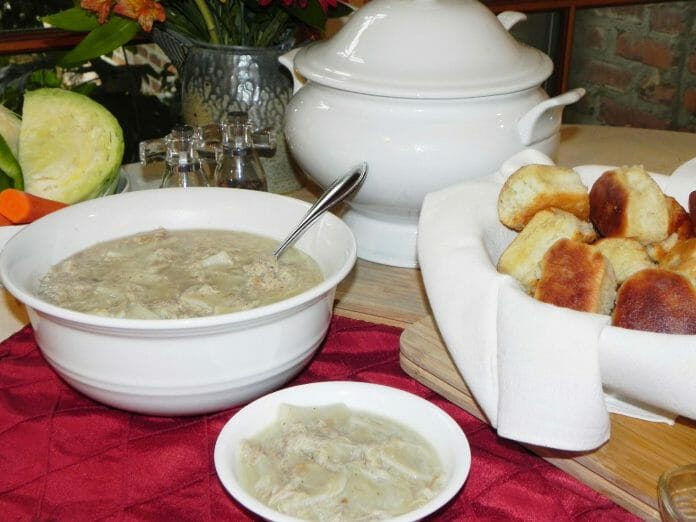 Fat, dumb and happy: What we become in a tryptophan stupor after consuming a hefty Thanksgiving meal and turkey leftovers. A nice state of being during which we forget our sorrows and recent failures …for a while.

CHICKEN AND DUMPLINGS — BACK TO NO-NONSENSE BASICS

Thanksgiving is over. The food budget is depleted. The fancy desserts have been demolished, and the leftovers have dwindled to slim pickings.

It’s time to get back into the kitchen, and rustle up some healthful comfort foods within a budget as we prepare for the next holiday.

This is when my family falls back on the humble dish of chicken and dumplings. The dumpling dinner originated in ancient times as a method for extending meager meat rations to feed hungry workers. A single chicken could be extended for up to three meals in this way, by boiling the chicken to create a savory broth and combining the broth with dumplings and the bits of chicken meat.

Thick, thin, or biscuit-style, the dumplings for our chicken and dumplings dish are made up as a biscuit dough consisting of flour, shortening (or lard or butter) and water, milk, buttermilk, or chicken stock. The dumplings may be formed into balls, dropped by the tablespoon, or rolled out flat and cut into strips. The dumplings for chicken and dumplings in other parts of the U.S. tend to be the fluffy kind, and those dishes often contain the carrots and celery that we Southerners remove after cooking the chicken.

It is up to the cook to determine whether the consistency of the dish will be thin like a soup, thick like a stew, or even thicker like a casserole. Like the dumplings, this preference has regional overtones.

Our Southern, stew-like version contains flat, noodle-like dumplings. It is thought to have migrated down the settlement trails from the Back Country of Pennsylvania. This working-class dish sustained all Southerners during the dark days after the Civil War.

Although regularly featured at family meals through the 20th century, the dish has fallen out of favor with younger cooks concerned with carbohydrates, calories, time constraints, and fear of tackling the dumplings.

Chicken and dumplings are not nearly as difficult to make as most novice cooks think. They may be made ahead and frozen, and the homemade version is infinitely more tasty and healthful than the canned or frozen versions. It contains no additives, and can be made with gluten-free or whole wheat flour. And above all, the dish is cost effective for feeding a family.

With an eye to thrift when preparing this week’s chicken and dumplings, I purchased a 10-pound bag of chicken leg-thigh quarters. The cost was under $7.

I simmered the entire bag’s contents in a large stock pot filled with water and seasonings, then strained the broth and picked out the cooked meat. The yield was more than 3 pounds of tasty light and dark meat, perfect for making up a large pot of the old-fashioned, all-in-one chicken dish. 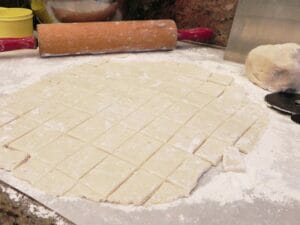 This dumpling dough is like icebox rolls – it needs refrigeration for at least 8 hours to become elastic. I like to make up the dough early in the morning for use that night. It also keeps well in the fridge for up to 3 or 4 days. The rolled and cut dumplings can be frozen on a baking tray and then bagged for future use.

Salt and black pepper to taste

Boiling water, added a little bit at a time

Refrigerate overnight or at least 8 hours. I have kept dumpling dough in the fridge in this manner as long as four days.

Rinse and clean any debris from the chicken. Leave skin on. Place chicken, veggies, and seasonings in a large stockpot. Fill with water to 2 inches below the rim. Bring to a boil on medium-high heat. After 10 minutes, lower heat to medium and cover with a splashguard (not a lid). Simmer for an hour, until chicken is falling apart.

Allow pot to cool until warm. Strain the chicken stock through a sieve. Pick out chicken meat from remains and refrigerate the meat and stock separately until ready to use. A layer of chicken fat will form on top of the stock during refrigeration and will be easy to remove. Some cooks reserve the chicken fat in the freezer for ongoing use in place of shortening or lard (The chicken fat is perfect for making up matzo balls).

Make the chicken and dumplings: 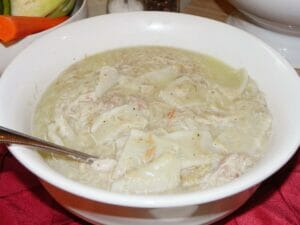 About an hour before serving the meal, heat the chicken stock (fat removed) in a large, well-seasoned stockpot. Add more chicken broth — most of a 48-ounce carton of chicken broth — to fill stockpot to four inches below the rim.

Dough should be very supple. Place it on the floured surface and gently roll to coat with the flour. Flatten and stretch the dough into a rectangular shape. Sprinkle with a bit of flour if needed. Roll the dough out to approximately 1/4-inch thick. The goal is to roll the dumplings very thin like noodles because they will puff up when cooking. Use a pizza cutter to cut the rolled dough into strips about 1-1/2 wide by 2 or 3 inches long.

Stir the boiling chicken stock. Drop dough strips, one at a time, into boiling broth, allowing liquid to resume a full boil between drops if the rolling boil diminishes. Simmer covered for about 30 minutes, making sure to stir gently at intervals to prevent sticking to bottom of pot. Do not skimp on the length of time needed to cook the dumplings. Dumplings are done when no longer transparent and when a test shows the same coloration all the way through (like testing pasta).

Heat the chicken in a small amount of chicken broth in a separate pot. Add the heated chicken and broth to the dumplings stockpot and cover. Simmer 10-20 minutes, stirring to prevent sticking and clumping. Season the dish with additional salt and pepper to taste.

VARIATION: If using frozen store-bought dumplings such as Anne’s or Mary B’s, be sure to allow broth to reach a boil between drops. Cover, and simmer much longer than stated in the package directions.

This version of dumplings substitutes butter for shortening, and doesn’t require refrigeration. I find that these will scorch more easily than the version made with water.

Additional flour for rolling the dumplings

Combine dry ingredients in a large bowl and whisk to blend. Add the butter and cut it into the flour mixture with pastry blender until mixture is crumbly.

Transfer the dough onto a floured surface, sprinkle with additional flour, and proceed to roll out and cut into strips as noted in the old-fashioned recipe above. These cut dumplings work better if allowed to sit for about a half hour before dropping them into the boiling broth.