December 7, 2014
0
524
Acting, singing and modeling are professions that most people only dream about; yet, with talent and a strike of that magic wand called opportunity, some people make it and realize their dreams.
But how do you encounter those kinds of opportunities? Where can you meet writer/directors, modeling scouts and agents and get them to give you that magical chance to prove yourself and become, quite possibly, the next Ariana Grande or Kate Upton?
If you’re in Oxford this weekend that extraordinary venue comes in the form of Showcase South, a company that enlists professionals in those chosen fields to meet and listen to unknown talent as they audition.

Angie Grant and Tomi Eisenbrei are partners in the company that seeks to locate and then showcase rising talent.
“Our main office is in Dallas, Texas,” Grant said. “And I live in Los Angeles, but I’m a Mississippi native; my hometown is Vardaman. Tomi lives in Dallas and basically runs the office while I travel the south looking for talent.”
Grant said she and Eisenbrei met when they both worked for another talent event in Dallas, but decided to leave that company and start their own. Grant had always envisioned starting her own talent-seeking company since her daughter, Allie Grant, began her own acting career at the age of three. In 2014, Showcase South celebrated its one-year anniversary.

“My daughter, Allie, began her career at an event like this,” Grant said, “it really jumpstarted everything for her. She was on Showtime’s series, “Weeds” for five seasons and she did “Suburgatory.” Now, she’s looking at becoming a series regular on the TV show “The Goldbergs.” And her career began with an event like this. Talent is awesome in the south and I just wanted the world to know that.”
Allie Grant travels with her mom and Showcase South whenever possible, stressing to other young people her story, that no matter how far you are from Hollywood or New York, you can still make it with the right opportunities.
“I’ve been an actor my entire life,” the younger Grant said. “And I’ve been fortunate enough to be a working actor for the last ten years and being from Tupelo, Miss. there is no way that I will ever be convinced that the life I’ve been privileged to lead now would have ever been possible without an event such as this. And what makes this so special is that children from these areas, who are usually the most talented, sometimes would never get the opportunity without a showcase such as this. Grant said an event such as Showcase South offers, opened the doors for her daughter and she and Eisenbrei want to do that for other young people. 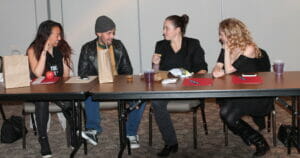 “We have Ford Modeling Agency in New York represented here,” Grant said. “We have IMG Modeling Agency, also from New York, here, and those are the two top modeling agencies in the world. And they’re here to see our talent. And that pool is growing; this event had around 25 participants.”
Along with scouts searching for modeling and singing talent, writer/director Brian Dannelly, who also teaches at the American Film Institute, and cast Grant’s daughter in the first season of “Weeds,” became involved with Showcase South through Grant’s daughter and said he loves being a part of the talent searches.
“”I’ve known Allie since she was 10 years old,” Dannelly said. “And we’ve been friends ever since. I love finding raw talent and watching how they can progress. It’s great.”

This is the second event for Christie Farese’s daughter, Lucie, with Showcase South and she loves it.
“This is a very encouraging environment for young people,” Farese, who is a Madison, Miss. native, said. “It’s very laid-back and it gives Lucie more confidence each time we do it. And we have made so many connections all over the country through Showcase South.”
Grant said they have a one-time fee only, which helps get the scouts and agents to the event (Showcase South pays for their expenses), and that if someone is chosen by an agency, Grant and Eisenbrei get no part of that revenue. Showcase South is also a member of the Oxford-Lafayette County Chamber of Commerce.
The event started at the Oxford Conference Center on December 5th and will wrap-up on December 6th.
“If people didn’t make this one,” Grant said, “we’re planning another one here in Oxford at the Conference Center in June, 2015. Just check out our website for updates and registration information. And you can also like us on Facebook.”
For more information, visit their website.
Angela Rogalski is a HottyToddy.com staff reporter and can be reached at angela.rogalski@hottytoddy.com.
Facebook
Twitter
Pinterest
Previous articleMelissa Terry Joins Rebels' Coaching Staff
Next articleOle Miss Faces TCU in Peach Bowl NYE