December 12, 2014
0
588
The Oxford Square is home to many creative muses, from writers to musicians, painters to poets; artists past and present have enjoyed the sublime uniqueness of the ambience that lives on the Square.
People also gather there to shop, converse and most of all enjoy the amazing restaurants that the Square has to offer. In most Oxonians’ minds, and anyone else who has ever experienced it, there is nowhere on earth like the Square — nowhere.

The Oxford Square Alliance would most definitely agree with that sentiment. Mark Huelse is the president of the Alliance and he and his wife own Something Southern in Oxford. Huelse believes the Square’s beauty and atmosphere cannot be duplicated.
“It is singularly the most special place on earth,” Huelse said. “And our organization strives to express and promote that in everything we do.”
Huelse said the Oxford Downtown Council rebranded to the Oxford Square Alliance in 2014, which was originally formed in the early 80s to promote the city of Oxford’s downtown area. Merchants got together to form the Council and revitalization efforts combined with the unity of the group helped to maintain the downtown area’s prominence over the years.
“But since the Square’s growth and its significance has become so vital to our city, with more restaurants and retail shops coming in,” Huelse said, “the last four years have seen a real rejuvenation of the area and more support for our organization, with more members.”

Huelse said one of the Alliance’s members, Will Hunt, who also handles the group’s marketing, had a meeting with the tourism director of Mississippi.
“They talked about how special and unique Oxford’s Square really is,” he said. “And how all you have to do is say the phrase, ‘The Square’ and people know where and what you’re talking about. So, we decided it was better to rebrand and have that name in our name; it’s more of a connection. And we became the Oxford Square Alliance.”
The Alliance is a privately-funded entity, financially supported by its members, which is around 60 or 65, but Huelse said that they couldn’t do it without the cooperative moral support they receive from the city of Oxford.
“It’s really a joint effort,” he said. “The city is great. And with the rebranding this year, we redid our sponsorships and for our special events, like our Christmas Open House, we have four stores on the Square that are ‘Square’ sponsors, so they’re an annual sponsor and they’ll sponsor the other two events we hold, the Spring Open House and the Summer Fest.” 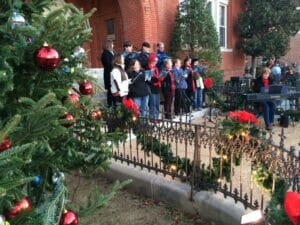 Huelse said the group meets four or five times a year, usually around the time the special events are about to take place. And that’s when everyone presents their thoughts and new ideas for the events.
“The antique sleigh that we added this year for people to take their own pictures with,” he said, “that had been a dream of ours for two or three years. And this year we happen to have the extra funds available and found the sleigh.”
Huelse said the entire reason the Oxford Square Alliance existed was to emphasize the beauty, uniqueness and wonders of the Oxford Square.
“It’s just an awesome place.”
Angela Rogalski is a HottyToddy.com staff reporter and can be reached at angela.rogalski@hottytoddy.com.
Facebook
Twitter
Pinterest
Previous articleOxford-Lafayette Humane Society's Angels on Tree For Its Animals
Next articlePoll: Vote for Best Ole Miss Frat House Christmas Decor