On Cooking Southern: Dressing and Roasting a Duck Like a duck on a junebug:  Attracted so strongly a person is gonna get right onto it physically or literally and ASAP. One of many duck-related American expressions and idioms.

I WAS A LUCKY DUCK AND MY SITUATION WAS JUST DUCKY!

How many squeamish East Memphis girls does it take to field dress a duck?

One… If she has an experienced hunter or chef to show her how to do it.

Like most Southerners of a certain age, I grew up in an extended family of hunters and fishers. Nobody ever fussed when the adult males would sneak away from the holiday gatherings to hunt some deer or ducks or quail or doves.

I learned about gun safety, absorbed the techniques for successful frog gigging, and became a deadeye shot while still a child. Nothing was as satisfying to my spirit as traipsing through the woods with my father or sitting in a boat with my grandfather.

The family philosophy was simple: The kill must be eaten. And he who kills it must clean it.

I got around that by merely going along for the thrill, without actually killing a living creature. I abided by my grandmother’s more oblique philosophy that she who never learns how to clean fish will never have to clean fish.

All of this changed last weekend.

Good-hearted Neighbor John had remembered my distress last winter when I was unable to track down any duck legs to make duck confit for my Hotty Toddy column. A dedicated duck hunter, he had promised to provide me with duck legs this year.

True to his word, John called me after a successful Thanksgiving-Friday hunt at his Delta duck camp.

How many ducks would I like, he asked. And did I want just the breasts or whole ducks?

“Well,” I said, “I would like four if you can spare them, and I guess I need the whole ducks since I want the duck legs.”

The next day, John delivered…. Whole ducks. Four of them. Two Mallard drakes and two hens. Feathers and eyes in pretty heads, and innards and all.

Upon learning that I’d never previously field-dressed a duck, Neighbor John assured me it would be easy. He gave me a quick verbal tutorial and suggested I check out several You-tube how-to videos. He even offered to have the lady down the road from the duck camp dress the carcasses next time. Then he headed off to The Grove for the Egg Bowl. 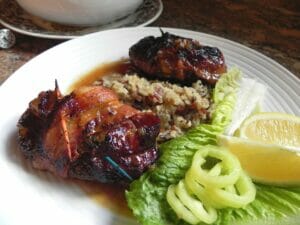 I called my brother, the hunter. He, too, assured me it would be easy to field-dress the ducks. He also gave me a verbal tutorial and said he would have come down from Memphis to do it for me if he didn’t have to work.  He also pointed out that wild ducks are not like farm ducks and probably wouldn’t have too much fat on those little legs, having flapped their wings all the way from Minnesota to get here.

Still fearful of the unknown, I called Will from Indianola Fresh Market. Will couldn’t do it; he was at The Grove. He, too, assured me that field-dressing the ducks would not be difficult.

I put the birds on ice in the cooler and watched several You-tube instructional videos. I read a couple of hunters’ cookbooks. I checked on the birds again. I googled more internet-based instructions on how to field-dress a wild duck.

By this time I had the general idea, but with several variations regarding how far to go when plucking the feathers and removing the pinfeathers. I vaguely recalled my father painstakingly plucking ducks over newspapers in the kitchen sink, and singeing the pinfeathers, a smelly process that my mother abhorred. I shuddered at the memory.

I loosely bagged the birds and transferred them to the garage fridge, thinking I’d work up my nerve overnight. When chatting via phone with traveling Hubby, who has never been a hunter, I was told to make sure I field-dressed the ducks outside – WAAAY outside.

The next morning at sunrise, while walking the dog and working up nerve to tackle the dreaded task, I encountered Neighbor Billy walking his bird dog. We chatted. I told him about my looming project.

Like John and Brother and Will, Billy assured me that field-dressing the ducks would not be difficult. An experienced commercial cook, Billy was on his way home to prep haunches of fresh-killed deer.  He chuckled when I told him about my various conversations and instructional viewings, and noted that I could have finished the field dressing in a fraction of the time I had already spent studying the subject.

Now I was feeling embarrassed. My commitment to develop some girl moxie was growing. I took the dog home and started preparing for the project. My phone rang. It was Billy’s wife, telling me that he was on his way over to help me field-dress the ducks.

OMG again. I was saved. When Billy arrived he quickly decided we didn’t need to completely pluck the ducks or even to remove the guts because I was not going to use the whole carcasses (which one would do when making duck gumbo).

The legs were more difficult.  Those pesky pinfeathers are tight down those little duck legs. The duck skin is actually very delicate and tears easily if not handled with care during the prep. By the third duck leg we had gotten the hang of it.

Brother was correct: wild ducks don’t contain nearly as much fat as domestic ducks. And those mallard duck legs are more like Buffalo Wings in size.

At any rate, thanks to Neighbor Billy, this East Memphis female has learned how to prep a wild duck from scratch. Next time, if Neighbor John is still in a giving mood, I’ll prep the entire ducks and make up some gumbo for the neighborhood.

Oh, by the way, forget the You-tube instructional videos. Some of us are hands-on learners. 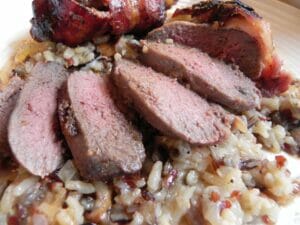 This is a variation of the classic version shared in my cookbook by Trail (Henry) Jordan of Kosciusko, MS. Before freezing the field-dressed duck breasts, soak for 20 minutes in a saltwater brine consisting of about 1/2 c kosher salt to 1 gallon of water. The brine soak will remove blood and ultra-gamey taste. Pat the breasts dry and wrap tightly to freeze or to cook.

Before cooking, the breasts must be marinated. Place breasts in zip-lock freezer bag and cover with Wishbone dressing to marinate. Refrigerate 6 hours or overnight. Combine butter, Worcestershire sauce, and spices in a small saucepan. Whisk, cooking on medium heat, until butter melts and ingredients are blended.  Squeeze lemon juice into pan and add the rind. Whisk until blended and reheated. Set aside on warmer.

Check internal cooked temperature with a meat thermometer. Remove the breasts from grill when duck is medium rare or medium, which should read 130-135˚F. Let the breasts rest 5 minutes before slicing and serving with wild rice and remaining lemon butter sauce. Quarter-inch slices also are terrific as hors d’oeuvres. 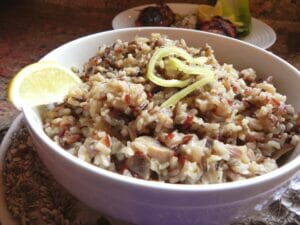 Salt and black pepper to taste

Juice of half a lemon

Sauté the onions and mushrooms in butter on medium heat until the onions are transparent and mushrooms release their juices. Add the rice and stir until liquid has been absorbed and rice begins to stick to pan.

Add chicken stick gradually, stirring to release rice. Bring back up to a simmer. Squeeze in the lemon juice and continue simmering until rice thickens and all liquid is absorbed. Serve with grilled duck breasts and the lemon butter sauce.