“Stonehenge is carefully aligned on a sight-line that points to the winter solstice sunset,” explains stonehengetours.com.
“It is thought that the winter solstice was actually more important to the people who constructed Stonehenge than the summer solstice. The winter solstice was a time when most cattle were slaughtered (so they would not have to be fed during the winter) and the majority of wine and beer was finally fermented,” the group said.
The winter solstice may be today but the observers of the ancient ceremony will celebrate at sunrise tomorrow in accordance to the solar calendar. The tradition has it that the ceremony takes place at sunrise closest to the time when the sun is stationary before beginning its journey to the north or south.
Newgrange in Ireland

This monument was built during the Neolithic period around 3200 B.C. making it older than Stonehenge and the Egyptian pyramids. Its purpose is unclear yet a fascinating occurrence happens every winter solstice: it is aligned with the rising sun yet every winter solstice the light can flood even its inner chambers.
Access to Newgrange is by guided tour only. Tours begin at the Brú na Bóinne Visitor Centre from which visitors are bussed to the site in groups. If one wants to witness the morning of winter solstice as the lights flood the Newgrange there is a lottery at the centre. Fifty are chosen out of thousands of entries per year. Those fifty persons can bring along a single guest. These winners are divided into groups of five and they are taken into the monument on the five days around the solstice as the light lingers in the chamber.
Those who are not able to attend this natural event can visit this website to watch webcasts of the winter solstice in Newgrange.
Feast of Juul – a Scandinavian celebration 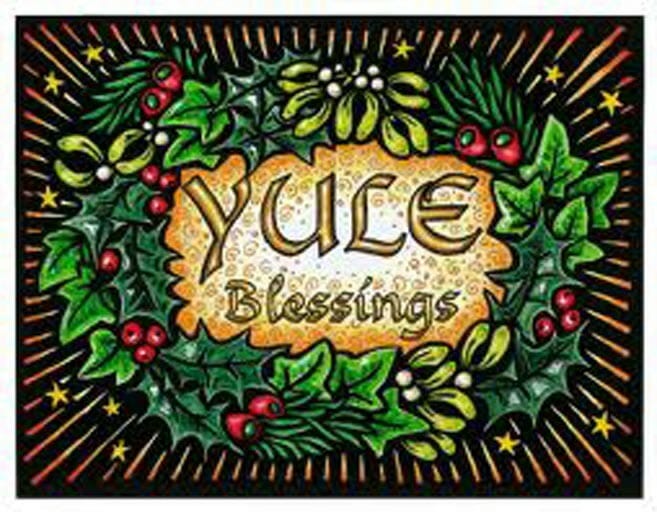 Remember the line, “burn we now our yuletide log,” from the song “Deck the Halls?” That line didn’t come out of nowhere. The present-day custom lighting of a Yule log at Christmas is believed to have originated in the bonfires associated with the feast of Juul.
During the December solstice to the Scandinavians the fires were lit to symbolize heat, light and the life of the sun as the people awaited its return. A Yule – or rather Juul – log is burned on the hearth to honor the Scandinavian god Thor. A piece of the log is kept for both good luck and as a kindling for next year’s festival.
In Europe the Yule log was burned until nothing but ash remained. The ash was then collected and either used as fertilizer on fields until Twelfth Night, as a charm or for medical use. The French peasants believed that the ashes kept under the bed would protect their houses from thunder and lightning.
Saturnalia in Ancient Rome 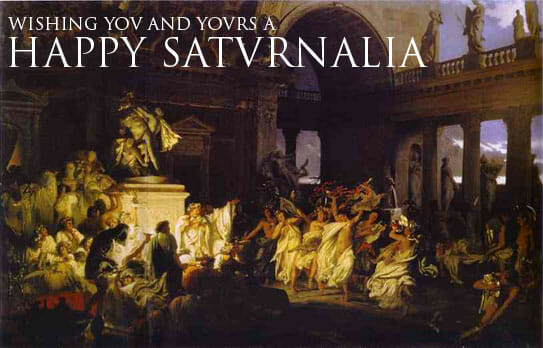 The solstice festival Saturnalia began on December 17 and lasted for a week. The festival was to honor Saturn, the father of the Roman gods and was characterized by suspension of discipline and reversal of the usual order. Saturn was an agricultural deity who was said to have ruled the world in the Golden Age when humans enjoyed earth’s bounty without labor. The reversal of order was to symbolize the social egalitarianism of the lost mythical Golden Age.
Grudges and disagreements were forgotten as businesses, courts and schools were closed. Wars were paused and the masters either served or dined with their slaves. It was a time of free speech. People donned synthesis, a type of colorful dinner clothes that would have been considered bad taste to wear in daylight. Many candles were lit as Saturnalia is a festival of lights.
A mock king is chosen from a group of slaves or criminals. He is permitted to behave without any restraints for the duration of the festival although he is killed at its end. Thus the use of free speech is careful since there are repercussions after its end. The festival gave way to a week-long spree of debauchery which spurred the modern use of the word “saturnalia” to mean a period of unrestrained revelry.
Do you know of many more festivals that were held on this day? Let us know!
[dhr]
Callie Daniels is a staff reporter for HottyToddy.com. She can be emailed at callie.daniels@hottytoddy.com.
Facebook
Twitter
Pinterest
Previous articleOxford Dazzles in Christmas Lights
Next articleRebels Share Favorite Christmas Eve Traditions