Heap: A whole lot of something, not a worn-out automobile. Usually emphatically refers to a measurement … such as a whole heap of trouble. Think sports recruits who get into brawls.

Nothing is more nourishing and comforting on a cold, wet winter’s evening than a hearty bowl of steaming soup.  So it makes sense that January is National Soup Month in this part of the world.

The most comforting of all soups this time of year seem to be those that use up leftovers in the fridge and freezer. You know what I mean — a tad of frozen green peas, a serving’s worth of pot roast, a smidgen of peas and beans, an itty bit of corn, a single, lonely-looking potato.

Check out my family’s vegetable beef soup below for a good example. I often make veggie soup with leftover pot roast and pot roast gravy, but it works almost as well when starting with cubed stew beef.

I have found that almost anything goes when throwing ingredients into the soup pot.  Remember Captain Kangaroo and Stone Soup? I even add chiffonades of cabbage and leafy greens to most of my soups. They add color and depth to the flavor, while enhancing the nutritional benefits.

My family also relies heavily on soup standbys such as chicken soup, chowder, and assorted cream bisques. But this winter I have been itching to explore flavors outside my Southern wheelhouse.  That’s why I have been studying up on soups not so common around here such as Callalou and Pepperpot Soup.

Callalou originated with West African slaves in the Caribbean, who made a soupy stew with leafy greens such as the amaranth plant also known as callalou, yams, and taro (locally called coco).  It usually contained some component of salted pig or beef as well. It reminds me of Gumbo Z’herbes, the greens-based gumbo loved in lower Louisiana during Mardi Gras. (See recipe at _http://hottytoddy.com/2014/02/27/on-southern-cooking-gumbo-zherbes-and-seafood-gumbo/ .)

Callalou recipes across the Caribbean are like our vegetable soup, including whatever seems to be prevalent on that particular island. Traditional Callalou varies among the cultures throughout the Caribbean, containing such meats as tripe, salt beef and pig’s tails, veal shanks or knuckles, and other ingredients such as coconut milk, okra and allspice berries.

Most Americans are more familiar with a version called Philadelphia Pepperpot, credited with helping our Founding Fathers create the United States. Christopher Ludwick, baker-general for General Washington’s Continental Army, developed a version of Pepperpot that helped save the starving American troops at Valley Forge during the winter of 1777.

Unable to purchase proper supplies from farmers who preferred the security of the British pound, Ludwick took a cue from local Creole slaves. He incorporated beef tripe, root vegetables, and a heavy dose of black pepper into a filling and nourishing stew-like soup.  General Washington may have nudged Ludwick in the proper direction, having first tasted pepperpot 20 years earlier when visiting his brother Lawrence in Barbados. 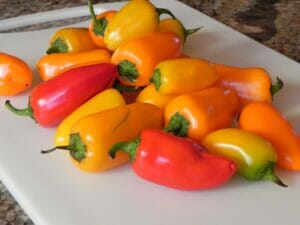 Long fascinated by Caribbean, Southern, and Philadelphia Pepperpot soup, I decided to try making it for National Soup Month. I even bought a package of  honeycomb tripe, which is essential in the traditional recipes. But when the time came, I was unable to mess with tripe or allspice or even coconut milk. … This Southern city girl can only go so far when it comes to offal and tropical flavors.

Instead, I created a beef and bacon variation with collard greens and sweet mini peppers seasoned with Creole seasoning. Hungry family and friends taste-tested it and declared the soup delicious. Of course, The Old Bride recognizes that everything’s better with bacon. My version, which I am calling Mississippi Hills Pepperpot, contains just enough pepper heat to warm us on a cold winter’s night and clear up clogged sinuses. 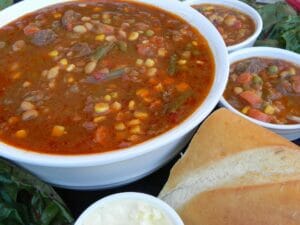 This soup is forgiving about ingredients. Add fresh, cooked leftovers, canned, or frozen veggies. The soup tastes better if allowed to age in the fridge for a day or two. Feel free to add diced white potatoes or sweet potatoes if planning to consume all the soup. I do not recommend freezing the soup if it contains potatoes because they get mushy when frozen.

1 c of celery, chopped, (about 3 ribs) PLUS celery leaves chopped

If starting the meat from scratch, dust it first with salt, pepper and garlic powder, then sear the meat on all sides in hot oil or butter.  Continue braising, (cooking covered, on top of stove) on medium-high heat to cook completely.  Uncover and sprinkle with French Onion Soup mix. Lower the heat to medium, stirring to blend. Add 1 can of water after a few minutes.

Continue simmering on stovetop until meat is thoroughly cooked. Pour the meat and its liquid into large stockpot.

Add 3-4 qt of water and additional beef stock.  Bring to a rolling boil on medium-high heat. Add tomatoes, tomato sauce and Bay leaves, bring back to a boil and lower heat to medium.

Add more water to cover the mixture completely. Stir until thoroughly mixed and add Worcestershire and spices.  Bring back to a slow boil, lower heat, and continue cooking for another hour. Simmer on low for a minimum of 1 hour; or up to 3 hours, stirring and adding a bit of water as needed.  Refrigerate leftovers. The soup tastes better the second day.

If I had a sweet potato on hand, I would have added it to the pot in addition to the white potato. Feel free to experiment!

Microwave the bacon slices on high, in batches of 5 to 6 slices at a time. The bacon should be cooked crisp (about 6 minutes for 6 slices). Drain the bacon grease into a large skillet or stockpot. Set the bacon on a paper towel to drain. When cooled, crumble or chop the bacon.

Reheat the bacon drippings and sear the beef on all sides in the hot grease.  Add the onion, celery and carrots and sauté until the liquid and drippings have reduced. Stir to prevent sticking. Add the bacon, collards and hashbrowns and stir. Cover and simmer until the greens have wilted.

Uncover and stir. Add the peppers and seasonings. Simmer until thickened. Stir in the beef broth or water and beef-flavor boost and simmer about an hour. Add more water as needed and simmer until ready to serve.