Henry: To His Koi Mistress 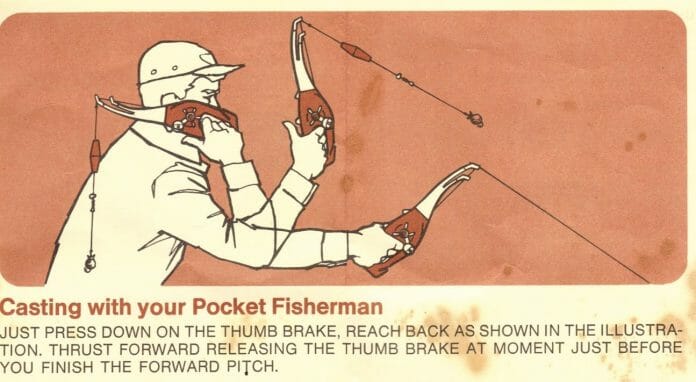 I went fishing yesterday in one of the many lakes on my vast estate in Patagonia. I launched the one-man armor-plated paddleboat I keep there and was enjoying the solitude when I hooked a fish on my $19.95 (plus shipping and handling) Popeil Pocket Fisherman. I fought with every ounce of my strength to get the fish in the paddleboat. Surely, I thought, this will be a world record.

After 30 minutes I finally got the fish close enough to net. After flopping a few times on the floor of the paddleboat, the largemouth bass relaxed and I got a good look at his face. I knew this bass from somewhere. While I was trying to figure out how I knew him, he turned his head toward me and began singing Bobby McFerrin’s “Don’t Worry. Be Happy.”

Delighted, I sang along until the whistling part, which I had to carry by myself because the bass could not whistle, its rigid lips being unpuckerable. As the bass kept time with his tail and enjoyed my whistling, I figured out how I knew the fish.

Henry: Holy Mackerel. You’re Big Mouth Billy Bass, the Singing Sensation, aren’t you? You’re mounted on walls all over the country, singing when someone walks by.

Billy: No. Don’t get me started.

Billy: There’s a good reason for that. They stole my face and my voice but never paid me a nickel. I’m the one invented the singing fish shtick.

Henry: You should get a lawyer.

Billy: I did. Hired a sole practitioner who floundered around with my case a while. He was no match for the sharks who represented Billy Bass. They buffaloed him; beat him like a drum.

Billy: You think you could do a guy a favor and put me in some water while we visit?

Henry: Oh, Lord have mercy. What am I thinking? Let me put you in this bucket.

Billy: Ahhh. Much better. Where were we?

Billy: Oh, yeah. I finally got tired of my lawyer’s carping about the legal barracudas working the other side. I smelt a rat and fired him. There was something fishy going on.

Henry: At least it made you a celebrity.

Billy: The groupers hanging around me were nice for a while. There was this cute little chub…,

Billy: For you, maybe, but for a bass like me, it’s groupers. And there were those wild Celebrity Pro-Am Swim Meets. I had a good gig as spokesman for a plastic sturgeon group out of Miami that specialized in enlargements. You probably don’t know, but in the fish community there’s plenty of smallmouths that want to be largemouths. Pathetic, really. I tell ‘em it ain’t the size that’s important. I’ve dated plenty of smallmouths, and they’re generally better kissers than these largemouth chicks who are always wearing things to accentuate their big mouths. You’d be surprised at how many of those hot looking babes are really cold fish.

Henry: You’ve had quite a life.

Billy: It’s how I roll. Back in my fighting days, my motto was “Roll like a gar, sting like an eel.”

Henry: Catchy. You ready for me to throw you back?

Billy: Hey, no throwing this old bass. How about just easing me out of the bucket into the water.

Henry: All right, but before you go, how about a couple of verses of “Take Me To The River?”

Billy: I’m sick of that song.

Henry: Come on. Sing it with me. Just for the halibut.

He perched on the edge of the bucket and we belted out Al Green’s showstopper. I fin-bumped him and he swam off, disappearing into the dark Patagonian depths. I thought for a moment about the cod-eat-cod world of largemouth entertainers. A ray of sunlight pierced the cloud cover and spotlighted Billy leaping from the water a hundred feet from me.

I thought I saw him wink at me, but then remembered he has no eyelids.

Michael Henry is a HottyToddy.com contributor. A graduate of Tulane and Virginia Law School, Henry published his seventh novel, Finding Ishmael, in April, 2014.